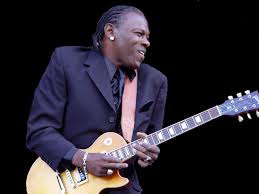 Joe Louis Walker (JLW) is an icon in the world of blues: singer, songwriter, musician, and producer. The multi-hyphenate has played with legends including Jimi Hendrix, B.B. King, and James Cotton. His discography includes more than 24 albums and two DVDs. He’s won four Blues Music Awards, including the 2010 Album Of The Year Award for “Between A Rock And A Hard Place,” and has been nominated for 47 more. His new album, “Everybody Wants a Piece” is nominated for a Blues Music Award in the category of Rock Blues Album of the Year. Joe also was nominated for a Blues Music Award in the category of Contemporary Blues Male Artist. In 2015, Joe was inducted into the Blues Hall of Fame. Stephanie and Wayne of Pillow Talking had the great pleasure and honor of interviewing this fascinating and accomplished artist. 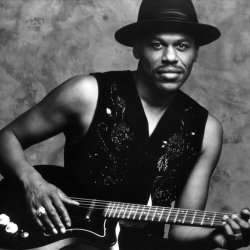 PT: Thank you for granting us this interview.  You also are known as JLW. Tell us, Joe, were you named after Joe Louis the fighter?

JLW: I actually was named after my father.

PT: So how do you get started in the music business?

JLW: My family was into music. My dad was into music down south. My mom and grandmother were into gospel music so there were all types. That was my inspiration.

PT: What made you decide to pick up a guitar?

JLW: At the school where I went you were able to check out instruments like you check out a library book, if your parents signed for you and vouched for you. Then after you had it for a little while you could decide if you were interested in taking lessons or you could also get your own gear. Or you could turn that instrument in for another one and try something else. So that’s how I got my hands on the guitar.

PT: What other instruments do you play?

PT: Once you started playing, what were your early musical influences?

JLW:  My dad would come home and he’d play 45s and they usually were guitar players – people like T-Bone Walker, Pete Johnson. My dad was really into that. Then my mom would listen to B.B. King and upscale blues. The latest things in the 50s. So we had a lot of music come through the house. It was a learning ground for me.

PT: Do you remember your first professional gig? 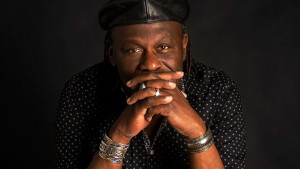 JLW: I think when I was about 14 me and my cousin had a band and we played at my sister’s wedding. My dad actually paid us $100.00. And that was a good feeling.

PT: (Laughing) We’re sure it was! So, we can assume your family was supportive in your musical career?

JLW: Very supportive. My cousins were musicians. My brother is a great singer. My father, mother, they were all into music and very supportive.

PT: And by 16 you were opening for people at local clubs. Can you tell us about that?

JLW: By 16 I was out on my own, had my own place. I’d been playing around the Bay Area quite a bit. I opened for a lot of guys. I became the house guitarist for singer Marty Balin’s club, The Matrix, and got to play with people like Earl Hooker, John Lee Hooker, Lightnin’ Hopkins, Freddie King, Magic Slim, Jimi Hendrix, and other blues guys coming through — all these blues guys and folk artists, too. I became acquainted with a lot of guys – there was a blues resurgence at that time. 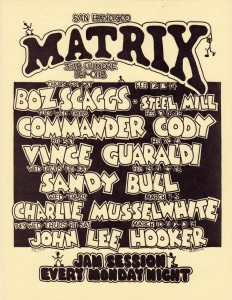 PT: That was the famous club in San Francisco on Fillmore Street.

PT: Can you tell us how you came into your own as a professional musician?

JLW: So I was bumming around, playing with a lot of different bands, going up and down the coast and up and down highway, playing in all different places. I was 18 or 19 and doing okay.

PT: You were a session musician too?

JLW: Yes. I did sessions, commercials, jingles. Then I met Michael Bloomfield and moved in with him and he helped me out quite a bit. Michael was very influential in getting my music to the next level.

PT: He introduced you to other musicians?

JLW: Michael was friends with a lot of guys – Big Joe Williams, old timers and new guys, so he was the link to both and to all of what was going on in music at the time. He could just sit down and talk.

PT: Tell us about some of the people you opened for? 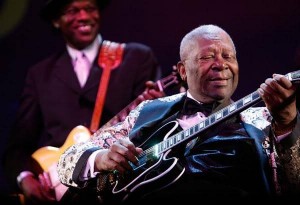 JLW:  I opened for a lot of people.  B.B. King, Thelonius Monk,  Freddie King, Magic Slim, James Cotton.  There were so many, I can’t even remember them all.

PT: What did you do after that?

JLW: For ten years I was with the band The Spiritual Corinthians. It was a gospel group and we toured all throughout California.

PT: What made you switch over from gospel to blues?

JLW: I’m just a restless soul musically – I just decided to go another path with my music.

PT: What did you do after your time with The Spiritual Corinthians?

JLW: I joined a group out of Athens, Georgia called The Mississippi Delta Blues Band and we toured Europe and Scandinavia. That was in the beginning of 1985. I came back, formed a band called the Bosstalkers, did some demos and sent them out and was signed by HighTone Records out of Oakland, California. I did six records with them before I went to Polygram. I’ve been with several labels.

PT: You’ve toured all over the world. How much do you tour today?

PT: You have played with legends in the industry. Who was the most inspiring artist you ever worked with or played with?

PT: Why was he the most inspiring to you?

JLW: He was one of the greatest guitar players in the world who never got a lot of accolades.

PT: Who was the most creative?

PT: Why would you say he is the most creative?

JLW: All you have to do is listen to his music. You’ll figure it out. 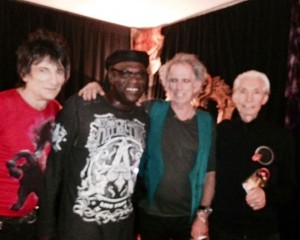 PT: (Laughing) We will. In terms of song writing and musical composition, what is your process?

JLW: To be quite honest, there is no process. One of the best analogies to answer that is what Keith Richards said – the songs will come to you. When you are sitting in a room and somebody does something or says something and a thought comes, an idea or a melody – you have to just grab it while it’s there because it will go away. That to me is the best answer to that question, the most honest answer. I don’t think there is a process to creating.

PT: What advice would you give to young musicians today?

JLW: If they can, to immerse themselves in the things that came before them. Learn about Johnny Cash. Learn about Alan Wolf. Learn about Big Joe Turner, Mitch Ryder, and the Detroit Wheels. Learn about them and the threads that run in between different types of music. Learn about the different themes in all different music. If they invested the time – nowadays it’s hard to get somebody to invest the time – everybody wants to be famous rather than be a good musician.  So I think if I could tell anybody anything, it would be what I suggested – just immerse yourself in the culture of the music – it will open some doors for you.

PT: That’s a great answer. What about you, Joe? What’s the best advice you were ever given?

PT: That’s cool! We like that. What is the worst criticism you ever received?

JLW: I think one that stuck with me one time – I was touring England in the late 1980s and I switched the songs in the set list and did a friend’s song. A reviewer liked the whole show with the exception of that one song. He wrote that one song didn’t seem like Joe was feeling it. I thought that was a good way to level a good criticism at someone. It taught me not to do songs that I’m not 100% invested in. 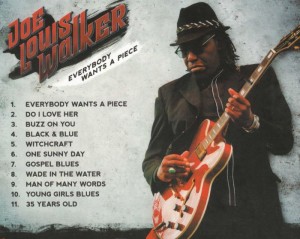 PT: What about your future agenda?

JLW: Well, we have a new album, “Every Wants a Piece,” which is nominated for Best Rock Blues Album at the BMAs. We are going to Israel soon – our second time for Blues for Peace. We also will go to the Blues Museum. I was inducted in the Blues Hall of Fame in 2015. We will be touring around the country and helping young people. We are trying to help young people along a musical path. And we keep on moving forward

PT: Is that on your website? The Blues for Peace movement?

PT: We will definitely mention that and give our readers the site for it. Why do you love Blues?

PT:  Great answer. Now, for the last question. If you could sum up your life in one word, what would it be?

JLW: (Laughing) Do I have to answer that now?

PT: (Laughing) Yes. Life can sometimes be a trip! Thank you so much Joe for a great interview!

For more information about Joe, see his OFFICIAL WEBSITE