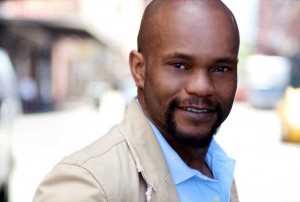 Starring in Peter and the Star Catcher at Connecticut Repertory Theatre

Tony Award-nominee Forrest McClendon will star as Slank/King Prawn in Connecticut Repertory Theatre’s (CRT) Peter and the Starcatcher, the “grown-up prequel” to Peter Pan. The wildly theatrical musical is by Rick Elice, based on the novel by Dave Barry and Ridley Pearson, with music by Wayne Barker, and is the second production by CRT as part of their 2016 Nutmeg Summer Series at the Storrs campus of the University of Connecticut. McClendon is a Norwalk, CT native and an award-winning stage actor, singer, and professor. Among his many other roles, in 1993 he appeared Off-Broadway in Faith Journey and in 2005, he appeared in a Philadelphia revival of Dreamgirls: The Musical. His Broadway debut was as Mr. Tambo in the 2010 musical, The Scottsboro Boys, where he received his Tony nom after appearing in the Off-Broadway production. McClendon also is a Lunt-Fontanne Fellow.

Read more about Forrest at: http://www.forrestmcclendon.com/bio.html. 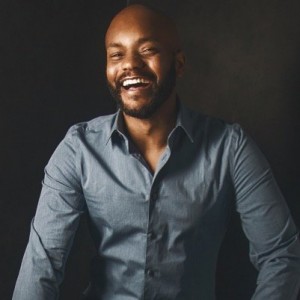 PT: We know you were born in Norwalk, CT.  Welcome back. Can you tell us a little bit about your background? Did you come from a show business family?

FM: I’m the youngest of ten children and I’m the only performer.

PT: Big family! What were some of your earliest influences both in terms of music and acting?

FM: I always loved to play (bang) the piano.  And two people allowed me to do that at a young age – Miss James, wife of Broadway producer Hal James, who was my benefactress in Nursery School; and Miss Cutie Mae Jordan, my first Sunday school teacher, who lived directly above us. I made a lot of friends doing plays and musicals in high school and that’s still one of my favorite things about doing theater.

PT: You had studied engineering at the University of CT and then changed to vocal studies. What made you change your major so dramatically?

FM: Two things: first, failure – I was flunking out of Engineering. And second, I sang the lead in Gilbert & Sullivan’s Yeomen of the Guard in Wilton while doing an internship at United Technologies in Norwalk – and I wanted more of the former and less of the latter.

PT: Well, that sounds like it certainly was an interesting time for you, and life-changing! Was this when you realized the arts were your passion?

PT: What do you consider to have been your big break?

FM: The Scottsboro Boys. No doubt. I got the audition because of the husband of a dear friend/former student. 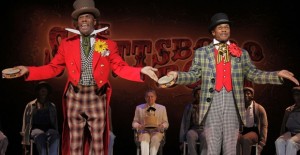 PT: You received a Tony nomination for your role as Mr. Tambo in that Broadway musical. How was that experience?

FM: Insane. The show was closed after running for about two months, so it was stunning to set the record for the most nominations of a show that was no longer running.

PT: It received an amazing 12 nominations in its 2010 two-month run! And for those who don’t know about it, it was a minstrel-style musical with book by David Thompson, music by John Kander, and lyrics by Fred Ebb and it was based on the Scottsboro Boys’ trial. And with the exception of one performer, it was comprised of an entirely of African-American cast.

So, how does it feel to be performing in your home state at UCONN and as part of the dynamic CT Repertory Theatre program where seasoned professionals have the opportunity to work side-by-side with young up-and-coming actors?

FM: It’s amazing to be back here and it definitely feels like home. My work involves using theatre as a tool for education so this is bliss for me.

PT: Well, I’m sure it’s bliss for the rest of the troupe to have you as well!  Can you tell us about how do you approach roles? What if any process do you have?

FM: My process is called “Choicework from A to Z”; that is, for each letter of the alphabet there is a specific choice that I make for the character.  A = Age, B = Birthday, C = Class … Z = Zodiac Sign. That is where my work as a storyteller begins.

PT: Wow. That’s an interesting method. Sounds very comprehensive. What advice can you give to young actors and entertainers just starting out?

PT: Very cool. What can the audience expect from Peter and the Starcatcher?

FM: When I saw this show on Broadway I fell in LOVE. The actors were having a blast telling this story about how PETER became PAN and I thought it was so smart and theatrical. This is a wonderful group of actors and people of all ages will find it engaging, entertaining and touching.

PT: We saw it on Broadway with some of our children and loved it, too – and we agree it is a blast! We can’t wait to catch it at CT Rep! We know you also teach. Tell us about that and how it is balancing that with performing.

FM: For me, education is my message and theatre is my medium so I am perfectly in balance when doing both. I’m currently on the faculty at the Eugene O’Neill Theater Center and my students will come to the show as part of their training.

PT: We’re sure your students will be thrilled to see you practicing what you preach to them. Can you tell us what is on your future agenda?

FM: My work focuses on stories about race, class and gender so works about Nelson Mandela, Ira Aldridge, and Langston Hughes are in my pipeline. I’m on Facebook, Instagram and Twitter for moment-to-moment updates.

Now, one last question: If you were to sum up your life to date in one word what would it be?

PT: That’s excellent (and we suspect that may not have been an on-the-spot response)!

Thank you so much for taking time out of your busy rehearsal schedule to do some Pillow Talking with us. We are looking very forward to seeing you and the rest of the cast in Peter and the Starcatcher.