by Pillow Talking
Somewhere my wife-co reviewer and I read a clause that said “indie would, but Hollywouldn’t.” and that sums up the independent film that legendary indie Filmmaker, John Gallagher has made. It is a film which is fresh and defies all conventions while, at the same time, uses those same conventions but in an entirely unique way. For example, is it a comedy? a drama? a documentary-style narrative of the death of innocence? a coming of age story? Maybe it’s all of them. Maybe it’s not. It certainly is a stimulating, thought-provoking endeavor with wit, charm and an Hitchcockian sense of anticipation with every carefully planned scene.

Like many of the new wave of netflix and amazon shows that young audiences are binging on, Sarah Q possesses the same kind of ambiguous, undefinable nuances and layers that hold an audiences attention. Parallels can be drawn between Woody Allen’s “Irrational Man” and the classic book of the same name by William Barrett where new age existentialism clashes with as the they say in “Inherit the Wind” — “give me that old time religion.”

Gallagher who always had a knack for getting name actors for his indies has outdone himself this time, bringing five former Sopranos stars together and casting mostly against type. Add to that film icons like Burt Young and Sally Kirkland, and you have a film filled with more experience and war stories than Ben-Hur (the original, not the remake). Add to that an incredibly solid performance by ingenue Emmy Tanzy, and you have an independent film with a cast to die for.

And, without giving away any spoilers, the ending kills! 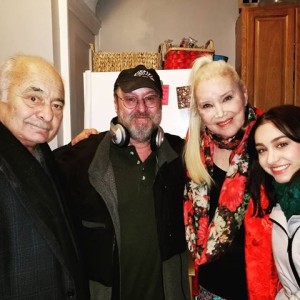