Pillow Talking’s Review of THE BIKINIS at WBT 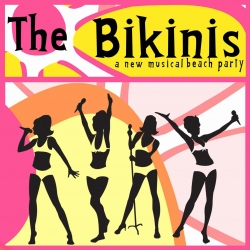 I want to open my review of The Bikinis with the following quote: “The show is pure escapist entertainment and a feast for the senses from start to finish.” The excerpt is from a review by my favorite theatre critic – myself, the first time I saw The Bikinis at another venue (my vanity has no limits). But seeing it again at Westchester Broadway Theatre was double the pleasure. When I heard we were going to see it again, I was thrilled. It’s a jukebox musical where you can just kick back and enjoy the show. Plus you get a full three-course meal at WBT as well!

If you took Jersey Boys, gave it a gender makeover, exchanged the classic music of The Four Seasons with classic hits from the 60s thru to the new millennium, added a dose of drama, a dash of audience interaction, and a pinch of a surprise ending, you would have The Bikinis.

The show was created and written by Ray Roderick and James Hindman, musical arrangements by Joseph Baker, with additional music and lyrics by Joseph Baker and Ray Roderick. The story follows four songstress wannabes who form a band in the sixties called The Bikinis. They achieve a slim margin of success (about ten of the fifteen minutes of fame allotted each of us) over the next two decades based on a one-hit wonder they had which was made into a 45 record. (Remember those vinyl-shaped donuts with the hole in the middle?) As the poet Robert Frost once said, “roads diverged” and the women went their separate ways at the end of the 70s. They reunite, however, in 2000 to perform a fundraiser in Florida. Condominium developers want to take over a mobile home park where the girls spent a great deal of time in their youth, so they come together after twenty years to help raise money to stave off the development.

The great thing about The Bikinis is that it can be enjoyed on many levels. Of course, there is the pure enjoyment level of listening to a chronology of some of the biggest songs from the sixties and seventies – songs like “Heat Wave,” “Under the Boardwalk,” “Where the Boys Are,” “Secret Agent Man,” and countless others. But one can pull a Woody Allen and go deeper. On a micro level, it’s the coming of age story of four women during America’s most turbulent decades, two of whom are sisters and all of whom are friends. On a macro level, it’s the coming of age of America told via a chronological musical journey – from the innocent days of the 1960s and surf hits like “Itsy Bitsy, Teeny Weeny, Yellow Polka Dot Bikini” to Nancy Sinatra’s biggie, “These Boots are Made for Walkin’” – through the turbulent early 1970s anti-war movement with hits like “Time of the Season,” “Lay Down (Candles in the Rain)” from Woodstock and “Simple Song of Freedom” – to the calm after the storm in the late 1970s and the anomalous disco period the country went through with hits like “Last Dance,” “I will Survive,” and “It’s Raining Men.”

Katy Blake (Annie), Anne Fraser Thomas (Barbara), Joanna Young (Jodi), and Karyn Quackenbush (Karla) were all pitch perfect as The Bikinis and had wonderful chemistry together. (There were moments when I actually was lulled into the delusion that there was really a group called The Bikinis). Shout-outs must also go to the band members who are on stage all the time and are just as much a part of the show as The Bikinis – Dan Pardo (Music Director/Keyboard 1), Brandon Sturiale (Keyboard II), Matt Sangiovanni (Guitar), and Ellen Bonomo (Drums).

I love that they break the fourth wall as well as when they really interact and involve the audience – particularly when they had an audience member on his feet doing “The Twist.” My absolute favorite part of the show (and my guilty pleasure) was their spoof of the 1965 ”classic” Beach Blanket Bingo, the fourth of the Frankie Avalon-Annette Funicello beach party films.

All in all, The Bikinis is entertaining, enchanting, and thoroughly enjoyable whether or not you grew up in the 60s or 70s. It would be interesting if The Bikinis were to get together now, almost anoher twenty years later, to review the music of the 80s and 90s. On second thought, senior baby boomers? In bikinis? With rap music? – maybe not. The show is perfect just the way it is.

Here in the Northeast we may be getting pummeled by Mother Nature’s snow-and-ice-fueled fury, but despite winter’s frigid grasp, Westchester Broadway Theatre’s The Bikinis: A New Musical Beach Party, directed and choreographed by Ray Roderick, is a sure-fire way to feel warm and fuzzy inside. The Bikinis, a light and airy jukebox delight, features the talents of four songbirds who, alas, are bikini-clad no more. It’s a fictitious reunion (based loosely on the 2007 story of a Florida trailer park known as Briny Breezes) of an all-girl sixties singing group who’ve joined forces decades later on New Year’s Eve 1999 in order to save the beloved mobile home park of their youth. With countless hits of the sixties and seventies and several original songs, it will have you tapping your feet and chair dancing the night away all the while longing to pull out your own swimsuits, sandals, and sunglasses.

The sassy foursome exude personality-plus – sisters Jodi and Annie, their cousin Karla, and BFF Barbara reminisce about how they rocked the boardwalk at the Jersey Shore back in 1964 when they still fit into (and were happy to don) their skimpy string and polka-dot clad numbers. After winning the Belmar Beach Talent Contest, they trod the sand in search of fame and fortune and to make a rocking 45 to send to their idol, Dick Clark. Taking us through a plethora of classic, upbeat songs of the sixties, the hippie/psychedelic seventies, and finally a brief peek into the sexy disco era, writers and creators Ray Roderick and James Hindman, with musical arrangement by Joseph Baker (who also is music director), slather it on like Coppertone on a hot body. In fact, I can imagine in some future day of theatre smell-o-vision, an odiferous burst of the white stuff would be a fun enhancement to the on-stage action. 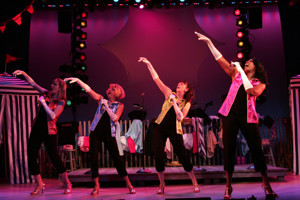 The stage is modest – two cabanas, some string lights, and an accompanying band who sit behind the clothing-and-towel-draped picket fence. A screen up above projects era-inspired photos. The ladies wear basic black, over which they toss on various costume elements to illustrate shifts in time and place. Little more could be needed. Jodi (a terrific Joanna Young) is the oldest, the voice of reason (after all, she’s a lawyer) and the most opposed to saving the trailer park, Sandy Shores Mobile Home Beach Resort. Developers want to plunk down a hefty wad to the owners in order to erect what else – some condos; Jodi thinks it’s a fab idea. Optimistic and sentimental younger sis, Annie (Katy Blake is wonderful), is all about saving the place and will do anything to see that it happens – sibling rivalry be damned. Anne Fraser Thomas is phenomenal as Barbara, who brings on the power of the disco period, like when she belts out “Last Dance” in disco sequins pulled over her yoga pants. Karyn Quackenbush is probably the spunkiest one of the bunch (and as the wife of Roderick, she appears in many performances of The Bikinis including at New Haven’s Long Wharf Theatre, where we’ve seen it before).

Infused with personal and historical anecdotes and even film shout-outs, it’s a charming ride across the surf and a journey into nostalgia. With hits like “Itsy Bitsy, Teeny Weeny, Yellow Polka Dot Bikini,” “Under the Boardwalk,” “Secret Agent Man,” “Incense and Peppermints,” “Lay Down,” “I’m Every Woman,” and “It’s Raining Men,” you can’t help but have a great time.

As always, thank you to Westchester Broadway Theatre for bringing lively and diverse productions to the stage. Catch The Bikini wave before it breaks!