Pilllow Talking’s Review of A TIME TO KILL

Someday Productions LLC and Pillow Talking are pleased to prresent the following review of A TIME TO KILL at the Elmwood Playhouse, New York– 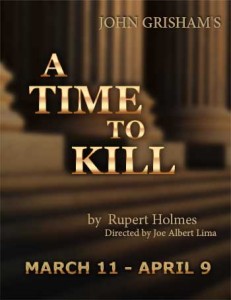 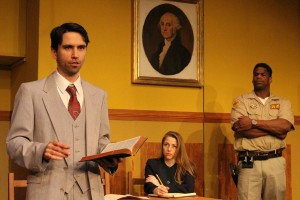 There is something about courtrooms and stage plays that go together like soup and a sandwich. Think about the great dramas and chances are there’s a courtroom lurking in the scenery.  A Few Good Men, 12 Angry Men, The Runner Stumbles, Inherit the Wind and the courtroom drama that I cut my teeth on many moons ago – The Andersonville Trial. What is it about courtrooms, lawyers, and the stage? It’s drama. Some of the best theatre I ever saw was not on stage but in the state and federal courthouses when I was a litigator in another life.

John Grisham’s bestselling novel A Time to Kill adapted for the stage by Rupert Holmes is no exception.  It is the perfect vehicle for riveting live theatre. The Elmwood Playhouse has succeeded in taking this complex, large cast, multi-scened drama and keeping it dynamic and engaging despite restrictive spatial limitations. Its success lies in an excellent cast, great staging and blocking, realistic sets and astute direction by veteran actor and director Joe Albert Lima. 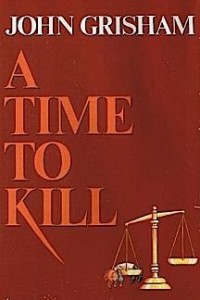 A Time to Kill was John Grisham’s first novel and was not an immediate bestseller. In fact, I remember reading it in a trade paperback published by Wynwood Press, a small publisher in Tarrytown, NY (now out of business). I remember thinking, Wow, this novel is literature! It’s comparable to To Kill a Mockingbird. Once The Firm became a blockbuster, Dell republished A Time to Kill. Matthew McConaughey and Sandra Bullock starred in the movie and the rest is history as they say.

The play version follows the same basic plot of the novel and the movie. A ten-year-old black girl, Tonya Hailey, is raped, beaten and left for dead by two white supremacists in rural Clanton, Mississippi. The rapists are caught and arrested. Before they can be tried, however, Tonya’s father, Carl Lee Hailey, is able gun them down while they are being transferred from the court to their cells. The case becomes a media circus with the race card being at its center. Carl Lee retains white, amiable local lawyer and solo practitioner Jake Brigance. Jake’s only chance is to get an all-white jury to agree that at the time of the killings Carl Lee was insane, an almost impossible outcome. He is aided by law intern Ellen Roark and his disbarred mentor Lucien Wilbanks. 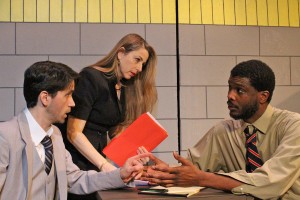 Following in Matthew McConaughey and Sandra Bullock’s footsteps is a tough job to say the least, but Damon Fischetti as Jake and Jessica Fishel as Roark do an admirable job and, along the way, have some nice chemistry together. Fischetti brings just the right balance of “aw shucks” Jimmy Stewart charm and (Gregory Peck) Atticus Finch’s “courage” to the court room. As a former litigator myself, I especially enjoyed the courtroom clashes Fischetti had with the Judge (realistically portrayed by Ralph Bowers) in order to assert himself as the Alpha attorney in the eyes of the jury. Ms. Fishel’s enthusiasm and verve serve as a perfect foil for Fischetti’s character. Bringing great reality to the role of Carl Lee Hailey is Sheldon Roberts. He made me believe that he was a passionate and loving father and, as a passionate and loving father, had very little choice in doing what he did to avenge his family, especially his daughter. He also had great chemistry with Maiysha Jones who played Carl Lee’s wife, Gwen Hailey.  Refreshingly strong was Hasan Gray who played Sheriff Ozzie Walls. (Mr. Gray only lists in his credits that he is a Bronx-born actor. He is destined for parts beyond the Bronx for sure.) Eric Fisler was perfect as the pompous, bombastic, politically ambitious D.A. Rufus Buckley. (I’m glad he’s not running for anything in the upcoming election.) The play as a whole and as Rupert Holmes adapted it long winded with little comic relief. However, it was nice to have the talents and comic timing of Scott Nangle as Lucien Wilbanks and Ron Schnittker as Dr. W.T. Bass. 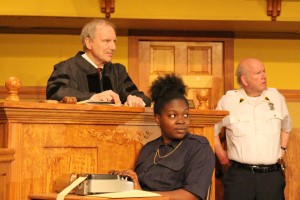 As a critic, I am often asked if I mention all of the actors in a play. The answer is yes and no. It’s difficult especially when it is a large cast and you have spatial limitations. However, theatre, like film, is a collaborative medium. And when the supporting actors are really good, it makes the whole production succeed. And as I was told many years ago at the American Academy of Dramatic Arts, there are no small parts, only small actors. So a shout out to the BIG supporting cast here including Kenneth Hesselbacher as D.R. Musgrove; Mara Karg as Dr. Rodeheaver; Elizabeth Mayer as Drew Tyndale; newcomer Sam Negin as Pete Willard (Sam has a great future in the theatre); Cliff Steinbeck as Deputy Looney; and Sadie Kopacz as the voice of Tonya. Three special shoutouts must also go to Ken Fishel who did yeoman’s work playing two surly characters Billy Ray Cobb and Terell Grist; Rick Levi as Deputy Pate (every time he said all rise I almost stood up); and Juel Ferdinand (who worked tirelessly as the court stenographer and didn’t break the fourth wall or her character).

Overall a great job to director Joe Albert Lima, cast and crew and the Elmwood Playhouse. Ecclesiastes tell us there is a time for everything, even a time to kill. There also is a time to see A Time to Kill and that is now. 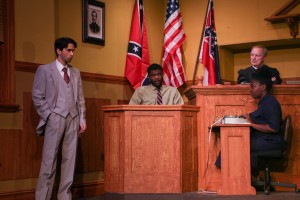 A few years ago my husband/co-reviewer and I decided to keep our collective brood of seven busy over several summer weeks by having a movie competition where we each chose films that the rest of the crew had to watch, afterward casting votes on a scale of 1-10. One of my selections was Joel Schumacher’s A Time to Kill, based upon the novel by John Grisham. While we eventually lost steam with the movie blitz (9 people X 4 movies each = overload), my film suggestion received top ratings. It’s one I’ve loved and seen numerous times, despite the grisly premise.

When Wayne and I heard that Elmwood Playhouse was undertaking Rupert Holmes’ stage adaptation, we couldn’t wait. Neither of us had caught it on Broadway. Elmwood has delivered superbly in the past (we loved Harvey!) so we expected no less this go-round. We were ready for a night of intense legal drama, Rockland County style.

Directed by Joe Albert Lima, Elmwood’s A Time to Kill featured a formidable cast of 18, whom he skillfully navigated through the three-plus-hour drama (there was one 15-minute intermission). Lima is a triple-threat: actor, playwright, and director and this is his seventh time directing at Elmwood. 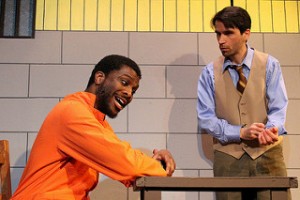 For those who might not know the premise, A Time to Kill is set in Clanton, Mississippi about 35 years ago. The play begins in the Clanton Court House, where two drug-addicted white supremacists are on trial for raping, beating, and nearly killing of a 10-year-old black girl. When her father, Carl Lee Hailey, sets a plan in motion to seek vengeance on the two, he enlists in the legal aid of young, idealistic attorney Jake Tyler Brigance. Brigance prepares a defense for Hailey despite his having very publicly gunned down the two men in the court house. Ellen Roark, a young, enthusiastic law student from Boston, and Lucien Wilbanks, Brigance’s disbarred alcoholic mentor, both assist him in this case which is fraught with countless challenges.

Having seen the film version so many times, it was hard not to have the indelible imprint in my brain of Matthew McConaughey’s iconic performance, but relative newcomer to the stage Damon Fischetti made the role his own. His southern drawl was convincing as was his portrayal of the sharp, wide-eyed attorney. Paired with the vivacious Jessica Fishel as Ellen Roark (played in the film by Sandra Bullock, Fishel also had big shoes to fill), the two danced the tango nicely, with just the right touch of sexual chemistry.

Sheldon Roberts delivered an incredible Carl Lee Hailey who was humble yet strong-willed, passionate about his family, and resolute in his decisions. He drew you into the pain of a father whose child has been so heinously wronged. His wife Gwen, played by Maiysha Jones, was his fiercely loyal and stoic partner in all things who had to accept her husband’s actions and hold the family together throughout the entire ordeal. 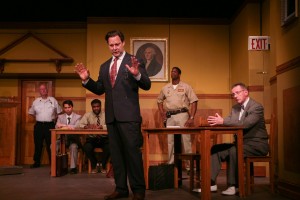 The ensemble cast also included Brigance’s nemesis, the cunning and ambitious D.A. Rufus Buckley played by Eric Fisler, who provided some of the rare moments of humor in this powerful drama, with his flashy smiles and political showboating. Scott Nangle as Wilbanks provided more of the humor with his drunken, slurred rants and Hawaiian shirts, not to be outdone by Ron Schnittker’s Dr. W. T. Bass who swooped in late in the game as the expert witness, barely off the sauce when he had to appear in the courtroom.

Hasan Gray was exceptional as the intense and fair Sheriff Ozzie Walls. Ralph Bowers led the courtroom as Judge Omar Noose (he can strike a gavel!) aided by Drew Levi as Deputy Pate who kept everyone in order. The two no-good rednecks, Billy Ray Cobb and Pete Willard, were deftly played by Ken Fishel and Sam Negin, respectively (Fishel also doubles as Terrell Grist, a Klan member who attempts to set off a bomb at Brigance’s home). Drew Tyndale played by Elizabeth Mayer is the flip public defender originally assigned to defend Cobb and Willard. Mara Karg was terrific as the stern, but ultimately flappable Dr. Rodeheaver, the expert witness for the prosecution. Ken Hesselbacher as A.D.A. Musgrove, Cliff Stiebeck as Looney, Juel Ferdinand as Norma, and Sadie Kopacz as the voice of Tonya rounded out the cast. 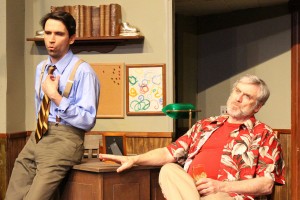 Elmwood once again proved they can bring great theatre to the community. A great job was done by Ralph Felice for set design and technical direction. It was a monumental but successful (and beautifully detailed) task to transform the modest stage into the court house, the sheriff’s office meeting room, Brigance’s office, and Brigance’s porch. Shout outs to Suzanne Potoma for costume design, Mike Gnazzo for lighting, and Larry Wilbur for sound. Thank you Elmwood for bringing on of my favorite stories to the boards!