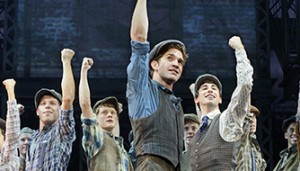 “Extra, extra, read all about it.” Read this review and, undoubtedly, many others that appear this week, and don’t hesitate to buy tickets to “Newsies.” The immature sounding title and a large cast of young actors who, perhaps, haven’t yet earned their wings might connote that this musical is kids’ stuff. Hardly. “Newsies,” based on the newsboy strike of 1899 in NYC, is gritty, dramatic, and serious in telling its story of David and Goliath (a line in the play).

Mix a little bit “Oliver” with “Billy Elliott,” then blend the two in a big Disneyesque bowl of reality and dreams, hardship and hope, charmingly flawed handsome young guy and plucky intelligent beautiful young lady and the result is delicious.

Act I kicks off with an all-boy song and dance. From there the story, character connections, pace, and purpose revv up. Act II finds a balance of poignant solos and full-chorus action, romance, dance, and laughter.

Joey Barreiro plays Jack (our lead) with charisma and street smarts. Not until Act II is his character challenged to sing his heart out. He does, and nails it. Morgan Keene (girl reporter aka Jack’s sweetheart) could very well play any Disney heroine. Yet this gingham gal separates herself from the pack in “Watch What Happens” – a Sondheim-like fast talking song. Ah, she’s no Ariel.

This musical has so many elements that make it a success, notably the sets and staging. It is difficult to believe that this touring company [say what you will about bus & truck shows, but Bushnell brings in Broadway-quality] mounts such a big musical on the day of opening night. Giant scaffolding, swinging up, down, sideways, create every one of the often-changing sets. The multi-fold arrangements of apparatus of metal and man (male dance ensemble of 25+ ) should be given credit of as one of the “leads.”

Choreographer Christopher Gattelli is a magician. Of course, large dance numbers are expected – why else are there some 30 or so characters on the stage at one time? Yet, the footwork goes above and beyond the predictable. The tap is sleek, the gymnastics are Olympian, the fighting is fresh, and the show stopping “Seize the Day” is breath-taking.

Don’t be surprised if, before orchestra plays its final notes, the audience bolts out of their seats for a standing ovation.