LEND ME A TENOR 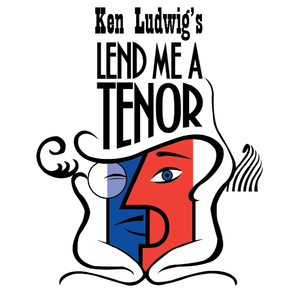 Save for some little imps who once hid in my closets (otherwise known as my children in their younger years) and but for a few adolescent door slams (thank goodness there weren’t many), my life has been pretty ordinary (ha, ha to those of you who know me!). While decorum dictates that one not hide in a closet and trample someone else’s shoes; nor should one rudely slam doors, farce on the other hand dictates that as many people as possible DO hide, DO enter and exit, and DO slam doors. And who doesn’t love a good farce with its absurd improbabilities, preposterous mistaken identities, and all-out buffoonery? I can wholeheartedly say that I do and the most recent incarnation of Lend Me a Tenor by the brilliant Ken Ludwig playing currently at Westchester Broadway Theatre has done the work exceptional justice.

With a terrific cast, great set design, and spot-on staging and comedic timing, Lend Me a Tenor is sidesplitting fun from beginning to end. And with the second act even better than the first, this show is a great way to get your head out of the winter doldrums and forget about the gray and dreary months that unfortunately lie ahead.

Farce can be formulaic and comfortably predictable, but there’s still plenty of fun in the knowing. In Lend Me a Tenor, everyone wants a piece of tenor Tito Merelli, the world-renowned singer who is scheduled to appear at the Cleveland Grand Opera House. The egotistical Merelli is, as usual, well more than fashionably late to his hotel, frustrating Saunders, the head of the company, whose pacing is about to make a permanent groove in the floor; and Max, his trusty assistant and yes-man. Max, by the way, is altogether less than enthused about Merelli’s impending arrival as his girlfriend Maggie, who also happens to be Saunders’ daughter, has a crush on Merelli, following a brief and nearly meaningless encounter sometime prior. The men are relieved when Merelli finally arrives, accompanied by his suspicious wife, Maria, who’s forever on the lookout for the presence of any young beauty who’ll surely turn Merelli’s head. But before Merelli has a chance to suit up and take the stage, a multitude of crazy circumstances arises (of course they do, it’s a farce!) and Merelli passes out, meaning someone has to take his place. All throughout, people are going in and out of rooms, hallways, and closets through slamming door after slamming door after slamming door. There’s also a bevy of beautiful ladies, more than a dose or two of mass hysteria, loads of sex (okay, that’s slightly overreaching), and above all, bellyaching laughter. 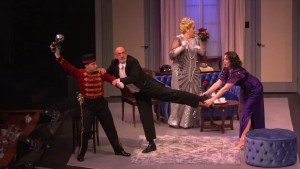 Tito is marvelously played by Joey Sorge, who slides aptly into the role of the overindulgent, overgrown man-child. Kathy Voytko as Maria is terrific as the moody, hot-tempered wife who struggles to keep her womanizing husband in line. Philip Hoffman as the blustery Saunders nails the high-strung, anxious character. J.D. Daw’s Max is mousy and hapless until he surprisingly isn’t. I must say I loved Daw in TheaterWorks Hartford’s Next to Normal and always enjoy seeing talented actors take on different kinds of roles. Molly McCaskill hits all the right notes as the idealistic and spoiled Maggie. Rounding out the cast are Sam Seferan who is great as the sarcastic, nosy Bellhop; Hannah Jane McMurray is superb as Diana, the sultry soprano who’s to appear with Merelli; and Tregoney Sheperd is hysterical as Julia, the pushy Chairman of the Opera Guild. Shout-outs also to the Standbys, Laura Cable and Duane McDevitt.

As farces cannot work without working doors, kudos to Steve Loftus for set design; also to Keith Nielsen for costume design; Andrew Gmoser for lighting design; Mark Zuckerman for sound design; Shannon Harrington for wig/hair design; Grumpy’s Props for properties; Victor Lukas as Production Stage Manager; and Duane McDevitt as Assistant Stage Manager. And last, but certainly not least, a big hand to Harry Bouvy as Director, without whom the spot-on staging and physical comedy could not have played out so perfectly.

The bottom line? Enjoy a great meal, indulge in a libation or two, and have a fantastic evening of zany laughs at Westchester Broadway’s Lend Me a Tenor!

A farce, when executed well, is a hysterical piece of theater. Successful farces work because of predictability and a rigid formula intrinsic to the genre: great comedic timing and pacing, mistaken identities, pratfalls and/or slapstick, and multiple doors and door slamming to name a few. Lend Me a Tenor at Westchester Broadway Theatre (WBT) is just that successful farce, executed with near perfection. The result is a side-splitting, belly-laughing experience that will linger long after the final bows.

The play itself, penned by Ken Ludwig, has a solid pedigree, produced on Broadway in 1989 where it received nine Tony Awards. Of course, past accolades are not enough to ensure the longevity, vitality and/or relevance to modern audiences. In order to fulfill the latter, you need great casting, excellent direction, superb pacing and a stage design that will facilitate the often very physical nature of the content. Once again, WBT succeeds on all aforementioned counts. 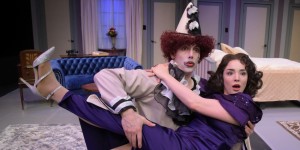 [Spoiler Alert] The plot involves the rare performance of a world-famous tenor, Tito Merelli, for a limited run of Pagliacci at a local Opera House. While Tito is more of a buffoon than a divo, his gastric issues and difficult wife prove to be no match for Saunders, the Opera House owner along with Saunders’ loyal minion, Max. Max’s almost-betrothed Maggie crushing on Tito does not help matters. More complications arise after Saunders and Max believe Tito overdosed on tranquilizers because his wife left him, and Max has to step in and play Tito’s part. Of course, Tito is not dead and for the remainder of the play, both Tito and Max are dressed as clown caricatures (obviously, Pagliacci represents a modern and politically correct change from the originally produced play that used Otello and blackface make-up) and are constantly mistaken for each other.

Joey Sorge is wonderful as Tito Merelli. He has a commanding presence as the world-famous tenor and yet can easily slide into the character of a whiny spoiled child. J.D. Daw as Max shows his formidable acting chops and wide character arc as he evolves from a nebbishy staffer into a hot lover and talented tenor in his own right – a transformation reminiscent of A Star is Born (my bad, had to throw that in). Molly McCaskill is on the mark as the star-struck Maggie as is Kathy Voytko as the delightfully difficult Maria. Shout-outs also have to go to veteran performer Philip Hoffman as Saunders and Hannah Jane McMurray as the vampy, campy Diana. Special nods must be given to the two scene stealers, Sam Seferian as the Bellhop and Tregoney Sheperd as Julia.

Harry Bouvy did a masterful job directing in ensuring that not only the performers gave their best, but that the pacing and timing were spot on.

WBT’s Lend Me a Tenor is an all-around engaging and thoroughly enjoyable experience that should not be missed.