KEVIN COSTNER and MODERN WEST at the Ridgefield Playhouse, August 22, 2016 at 8 p.m. 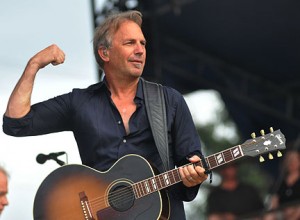 You may know him best as an Academy, Golden Globe, Emmy, and SAG Award-winning actor, director, and producer. Multi-hyphenate KEVIN COSTNER has graced the screen in such spectacularly notable roles as Eliot Ness in The Untouchables, Lieutenant John J. Dunbar in Dances with Wolves, Jim Garrison in JFK, and countless more films including Wyatt Earp, Bull Durham, Tin Cup, The Bodyguard…the list goes on and on. But what you may not know is that Costner fronts the musical group Kevin Costner & Modern West, a country rock band he began with the incredible support of his wife, Christine. About it he says, “F–k it, what do I have to lose but maybe some of the best times of my life?” About this endeavor goes on to say, “I always thought that music could build a stronger, more personal moment for me. It would create the opportunity for a genuine exchange much greater than the movie, TV interview or magazine. It would be real, full of mistakes and without apology. But most of all there would be the chance to have some fun.”

With Teddy Morgan as lead guitarist and producer; Larry Cobb on drums; Park Chisholm on vocals and guitar; and sometimers Roddy Chong, Bobby Yang, and Luke Bulla who “burn” the fiddle when they aren’t with their own bands, Kevin Costner & Modern West’s first world-wide tour was in 2007 and their first album was released in 2008 (a second was in 2010). Now, they are coming to our own backyard — appearing at the Ridgefield Playhouse Monday, August 22, 2016 at 8 p.m. You won’t want to miss it!