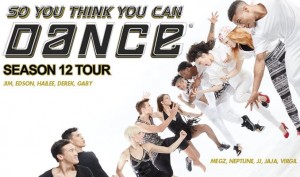 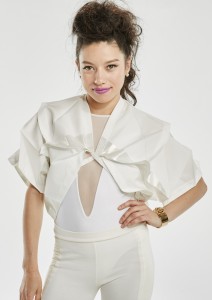 Fourteen-time Emmy Award-winning “So You Think You Can Dance” launched its Season 12 tour this past October which features the TV show’s top ten finalists from “Team Stage” and “Team Street” – the latest format had allowed dancers themselves to select whether they felt their styles were reflective of stage or street dancing. With some old favorites as well as new-for-the-tour, original routines, they all will be boogie-ing across 70 cities in the U.S. and Canada. The dance line-up includes from Team Stage: Gaby Diaz, Edson Juarez, Jim Nowakowski, Hailee Payne, and Derek Piquette; and from Team Street: Megan “Megz” Alfonso, Eddie “Neptune” Eskridge, Virgil Gadson, Jessica “JJ” Rabone, and Jana “Jaja” Vankova.

Pillow Talking had the opportunity to speak to top-ten finalist and featured dancer Jessica “JJ” Rabone this week, in anticipation of the SYTYCD Tour’s arrival in Uncasville, CT at Mohegan Sun Arena.

Thank you JJ for granting us this interview!

PT: We’ve read that you began dancing at age 17, which is a bit later than many young people start out. Tell us what that was like and how it was for you to be dancing with people who are both younger than you and likely started at much younger ages.

JR: I was born and raised in Japan. I was always dancing as a little kid, learning choreography. But I started my training when I was in high school. I had a friend who took hip-hop lessons. It was $15 to take a class; it was a fun time. I kept going back to it. When I was 21 I met a choreographer and I auditioned for his piece. I had never seen dancing like that in Japan. I moved to L.A. one month later. This is my tenth year in L.A.

PT: Wow. That must have been culture shock! What was that like for you?

JR: Everything was like SUPER culture shock. I thought I was a pretty good dancer in Japan. But I was the weakest in every class in L.A. I had to stay focused and keep practicing.

PT: What was that like? You must have been dancing with younger dancers.

JR: I realized that comparing myself (to others) didn’t help anything. And you can’t get younger, so you keep moving forward. You keep the focus on yourself as much as possible.

PT: What was next at that point?

JR: I had decided I wanted to make a living as a professional dancer. I had my artist/work Visa and I took work as a dancer; random stuff. I did music videos. It was all small (amounts of) money. I did anything to gain experience. I took any job – it was so much fun getting paid to dance. 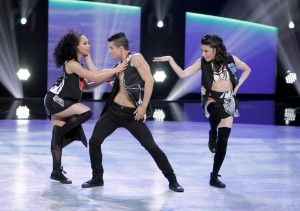 PT: We’ve read that you dance in many different styles.

JR: At first it was hip-hop. When I came to L.A. I took every class: American ballet, jazz, house, locking, popping, breaking. I don’t stay stuck on one style. I switch up my classes.

PT: Do you cross-train? Do you work out in between?

JR: I’m not a fan of working out. Some people work out for the look. When I want to build muscle for dancing I dance to work out. I do 200 relevés or pliés. I take classes and learn new steps. 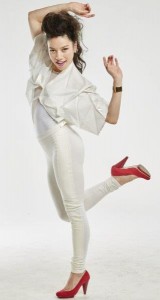 PT: So do you combine styles in your dancing?

JR: Yes. In my free-style technique I’m inspired by different styles. I can go from a pirouette to a knee-drop.

PT: What is life like for you on tour?

JR: I am working on editing my reel to post online. I sleep on the bus. We try to stay active, creative. Doing the same show over and over, we teach each other steps.

PT: What made you try out for So You Think You Can Dance?

JR: Eight years ago in Season 4 I tried out but I was cut in the first round. I didn’t even make it to the stage in front of the judges. It was a sad moment; I’d just moved to L.A. I felt good about myself. I had a lot of (dance) styles under my belt. And then I didn’t go past the first round. After that I felt I shouldn’t be dancing; waiting ten hours to audition then cut after a one-minute solo…But I always wanted to go back. I wished and wished. I pushed myself – I wanted to wait until the day I was strong enough. Then I was 29 – and I knew it was my last shot – under 30. I still thought I was not good enough but it was my last chance.

PT: And you made it!

PT: What about your family? Did you move on your own or did you have family in the U.S.?

JR: I moved by myself. My entire family is still in Japan.

PT: And are they supportive?

JR: Yes. They have always been supportive of me and my sister. My father had moved from England to Japan so he couldn’t really say anything about me moving to L.A. They have supported me in doing what I want to do. To focus. To go for my goals. To keep going. When I decided I was going to L.A. I was going to work because I needed money to move. My parents said “Don’t waste three years just to make money in Japan.”

PT: So your parents helped you financially?

PT: What did your family think about your success on SYTYCD?

JR: They didn’t know about the show. It doesn’t air in Japan. But they were very excited.

PT: Did they make it to see you perform on SYTYCD?

JR: Yes, they came to see the show. I was doing a tango piece with my teacher. We got a standing ovation. They also plan to come to see the tour in Canada. 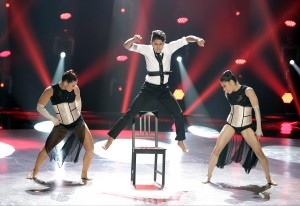 JR: We do like three shows back-to-back, or mix it up, sometimes two or four shows then a day off; we have off like one to two days a week. We travel all by bus. I sleep when the bus is moving but as soon as it stops I wake up! Over Christmas break we will fly back.

PT: How do you pass the time? And have you made any close friends through SYTYCD?

JR: Yes. I have really clicked with Jim (Nowakowski). I knew he was a cool guy from the show. On tour we are on the same bus – and we are both Asian so we are always looking for Asian food!

PT: We’ve read that you’ve done work with Pink at the AMAs, you were on The Tonight Show with Jimmy Fallon, and on The Ellen Degeneres Show. What were those experiences like?

JR: It was the L.A. lifestyle. You go on a lot of auditions. I was so excited for the Pink audition – it was old-school hip-hop. I was so into it. I got to wear sneakers and a funky outfit. For lots of L.A. auditions they want you to wear heels –  very sexy. And Pink was such an amazing person. The show went great!

On Ellen it was with the ILuminate dance team from America’s Got Talent. Ellen was so nice! She shook hands with all of us. Said “Thank you” to us for being on her show! She looked right into our eyes.

And Jimmy Fallon was with the Groovaloos. He was very nice.

PT: So what’s next for you after SYTYCD?

PT: What advice would you give to a young dancer starting out?

JR: Don’t expect things to happen your way. You never know what’s going to happen. You may not book a job. All you can do is prepare yourself for the opportunities that do come. You train hard, you focus. You keep moving forward. (You don’t get the job) but five minutes later you brush it off and wait for the next thing around the corner! 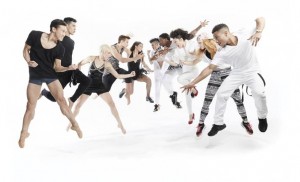 For more information about the SYTYCD Tour or for ticket information please visit: http://www.fox.com/so-you-think-you-can-dance/article/2015-dance-tour