Someday Productions LLC and Pillow Talking are pleased to present the following article from frequent contributor and guest blogger, multi-award winning Producer, Director, Writer, Author John Gallagher. John has more lifetime achievement awrds for filmmaking than a cat with nine lives. He provides advice, guidance as well as insight into the making of one of his most recent films, SARAH Q. 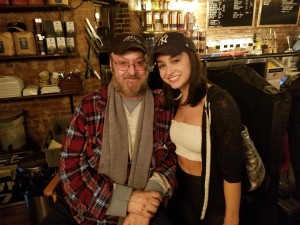 How a Young Actress Inspired the New Feature Sarah Q

But I’d be hard pressed to name an actor who inspired an entire film, unless that actor is Emmy James, who plays the title role in my latest feature Sarah Q. Sarah Q is the 18th feature I have directed and/or produced. I have also directed another 20 shorts, but who’s counting besides my mother? 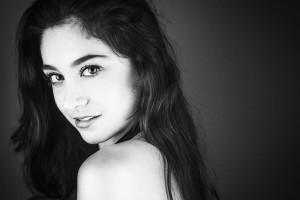 For the past 20 years, I have taught a popular film acting class at One on One in NYC where I have learned so much from the actors in my classes, earning the high praise of being an “actor’s director.” One on One has very rigid standards and I have never had a bad actor in a class. I have also cast literally hundreds of actors from these classes, either personally or through recommendations. In addition, I have had directors take my class, and the quality of performances in their subsequent work is extraordinary (too many newer directors don’t know enough about acting).

I had the good fortune to meet Emmy in one of these classes in 2016. One on One assigns an actor to run camera and computer and Emmy had been given this task. I instantly knew she had talent; it’s all in the eyes, truly, and I pride myself on spotting it when I see it. I mean, after 40 years if I can’t tell, I should just be flipping pizzas at the corner pizzeria.

So I knew. Talent, smarts, looks, and the most important qualification – the ability to take direction. That’s what I saw in Emmy James.

At the time I’d been prepping a feature titled All Mobbed Up, a drag queen mob comedy, and that’s when Emmy and I became friends. We traveled to Brightside Film Festival in Jersey City where my film We Remember was screening; we went to the premiere of a feature I co-wrote and co-produced called Sam (with Executive Producer Mel Brooks); and I then I got to know her. Emmy hailed from a Detroit suburb, trained at the American Academy of Dramatic Arts, one of the top conservatories in the country, then made her first few films on the NY Indie scene. I decided to cast Emmy in All Mobbed Up, but when financing for that film disappeared (as these things happen), I moved on to create the screenplay for Sarah Q. From day one, I pictured Emmy as the title character and crafted the story with her in mind. I enlisted in the aid of New York writer Joe Benedetto after my close friend Joey D’Onofrio suggested I see Joe’s short film Hide the Sausage in which Joey stars. Joe and I were both on the same page and we began to alternate writing scenes; I focused on the conservatory scenes and Joe focused on the more traditional, plot-oriented scenes.

Unlike Sarah Q’s Sarah, Emmy is neither gullible nor naïve, but she did completely understand the character; however, like Sarah, she hailed from a small town, made the move to New York City, and trained at an acting conservatory.

By the time we got the funding for the film, it was the middle of winter, so we were consigned to shooting in often arctic-like temperatures in the New York area. Most low-budget indies are faced with such challenges. Sarah Q was no exception. 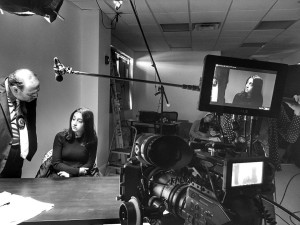 With only eighteen days to shoot, Emmy had to work every single day. Emmy’s character required 42 wardrobe changes; with each fitting, a carefully pre-designed color scheme. We’d hired a costume designer whom I did not know, and it turned out to be an almost complete disaster. At the final production meeting, she informed us that she would not appear on set. With so many wardrobe changes and a very inexperienced script supervisor, maintaining continuity for Emmy’s wardrobe would take a tremendous amount of time and attention. Not having the costume designer on set would be a near impossibility – and I had no option but to promptly fire her. Prior to this fiasco, I’d been used to working with only world-class costume designers. On another of my films, The Deli, Melissa Toth had been my designer; she went on from there to work on the films Eternal Sunshine of the Spotless Mind and Manchester by the Sea. I also worked with Catherine (Cat) Thomas on my film Blue Moon, who later went on to design for Kill Bill: Vol. 1 and Kill Bill: Vol. 2; so the unprofessionalism by our former costume designer was shocking. One of the producers then hired a friend to take her place – but as our (bad) luck would have it, he promptly lost one of Emmy’s winter coats which had been established on the first day of the shoot. Thank God Emmy is detail-oriented; she was always checking for continuity on her own wardrobe. Despite all the ups and many downs, were there complaints from Emmy? Not a one. 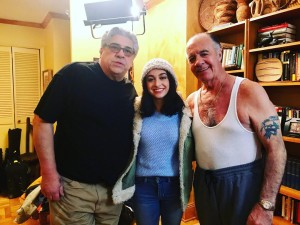 In addition, the initial plan had been for Emmy to stay with friends in the city during the filming. But because Emmy was required to work every day on some emotionally demanding scenes, Sarah Q’s investor wisely booked her and co-star, Ashlee Macropoulos, into a bed and breakfast. By the end of the shoot they’d become like sisters, demonstrating palpable chemistry in their scenes together.

While I’d always granted Emmy second takes (a request common to most actors), my only regret is the day I couldn’t. After a particularly trying scene, I felt I’d gotten what I needed and moved on. We’d been shooting far from the city and I had to be super-conscious so that we wouldn’t go into expensive, unaffordable overtime. I had to make the call that she’d given her best as we just didn’t have the luxury of doing another take. 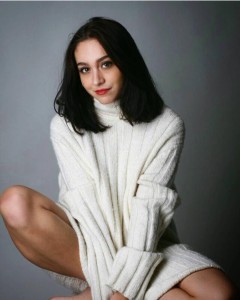 In addition to embodying the character that Joe and I had created, Emmy also made an important suggestion for the end of the film; it was much better than what Joe and I had originally written. In fact, it was brilliant, and it undeniably improved the script. Now that’s what I call a thinking actor!

So, after 18 days of shooting, Emmy returned to LA. Because I hadn’t needed to shoot much footage, the editing process went very quickly and the film had its premiere at the Golden Door International Film Festival in Jersey City. Not surprisingly, Emmy won Best Actress, beating the likes of Kelly McGillis.

Iam incredibly proud of Emmy James and look forward to working together again, but most especially, I’m looking forward to seeing Emmy enrich films for years to come!

John Gallagher just received his seventh Career Achievement award, this time from the Long Island International Film Expo. In addition to Sarah Q, he is the director of The Networker, Cupidity, Blue Moon, The Deli, Street Hunter, Beach House, and the award-winning shorts We Remember, Wink, and Want. John is also the author of Film Directors on Directing and (with Frank Thompson) Nothing Sacred: The Cinema of William Wellman, which Leonard Maltin called the best book ever written about a film director.