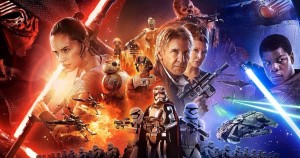 It was 1977, and I already was turning into a culture vulture, eagerly devouring any and all media at the time. I had seen Rocky and it was my all-time favorite film closely followed by The Godfather and Jaws. I liked sci-fi as long as it had some connection to Earth and humans. I was not a fan of Dune or alien worlds, and bug-like protagonists were not my cup of tea. 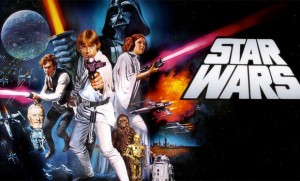 I remember going to see Star Wars in a theater in New York City – when theaters were big affairs with hundreds of seats; where only one movie was screened at a time; and the floor was so thick and greasy with butter from discarded popcorn containers that it was a feat to get to your seat without falling.

I didn’t know much about Star Wars. Back then we did not have the kind of media hype we have today, so I wasn’t expecting much. I liked American Graffiti (George Lucas’s previous film) and knew that Harrison Ford (who had a small part in American Graffiti) had a major role in the film. I also knew that Alec Guinness (from The Bridge on the River Kwai – another one of my film faves) and horror-genre great, Peter Cushing was in it. Regardless, as I said I wasn’t expecting much. 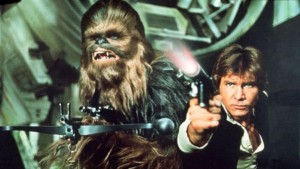 – I had become a bona fide Star Wars fan. I went out after the movie and bought the soundtrack (when soundtracks contained mostly instrumental music rather than songs by famous groups that you never hear in the film) and a poster. I don’t know how many times I saw the film after that. Let’s just say that it was a lot.

As I matured, my level of fandom for the subsequent films in the saga waxed and waned depending upon the film, but, at the very least, I always was entertained.

What can I say about the new Star Wars Episode VII: The Force Awakens movie – especially without spoiling anything? 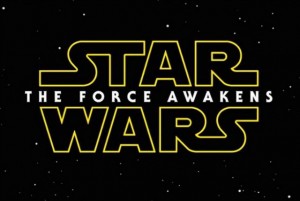 Like Stargate, I was transported back in time to the year 1977 and it was as if I was watching the first Star Wars all over again. I was back on the movie-watching spectrum, my emotions caroming from zenith to nadir. I experienced the same chills, the same excitement, the same anticipation, the same feelings of hope and despair that the characters on screen experienced.

Star Wars has been reincarnated into – well – Star Wars. Like the first one, it begins in media res and there are plenty of loose threads and unanswered questions at the end that that will provide enough fodder for tons more prequels and sequels. To say anything else would cross into the demilitarized zone of spoiler enemy territory.

J.J. Abrams, who reinvigorated the Star Trek film franchise, did a masterful job of directing, capturing all of the 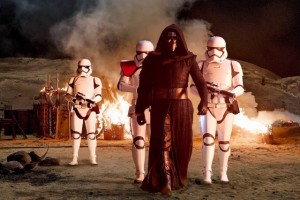 successful elements of the first film and injecting his own vision as well. New stars will rise as the young generation of actors quickly become media sensations – Daisy Ridley (Rey) was amazing; John Boyega (Finn) was endearing. Oscar Isaac (Poe) was dashing in an Antonio Banderas (stole that reference from my wife) – Sylvester Stallone type of way. Equal kudos must be given to the dark side participants as well – Adam Driver (Kylo Ren) as Darth Vader’s grandson – he has to wear a mask because his good looks will thwart your dislike for him. Domhnall Gleeson (General Hux) showed his acting chops by playing a character 180-degrees from the one he played in About Time. And what can we say about actors Harrison Ford, Mark Hamill, Carrie Fisher or the classic characters C-3PO, R2-D2 and Chewbacca? Although their mere presence was enough to elicit applause in the theatre, they all showed the same ability to slip back into the characters that made them famous. Once again, to say anything more would cross the line into spoiler territory.

Bottom line? If you are not a Star Wars fan or have never seen one, watch Star Wars Episode VII: The Force Awakens and you’ll love it. If you are already a Star Wars fan, you’ll love it even more.  And for all the armchair critics who say there is nothing original in the new movie, which is better?  A reworking of a classic tale with the same favorite characters as well as new ones? Or a remake that will never be as good as the original? 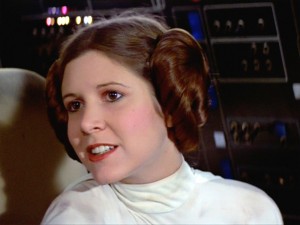 Okay, so I was very young when the first of the Star Wars trilogy (Episode IV: A New Hope) was released. I do remember enjoying it and all of its colorful characters but most of the story has been lost to me over time. (And who didn’t try out the Princess Leia side bun hairdo?) I did see the second, The Empire Strikes Back (Episode V) three years later, but by the time Return of the Jedi (Episode VI) came out, I think my interest in the epic space opera fizzled out. Further, I never got into the prequels.

But it has been impossible not to have become caught up in the frenzy of the newest Star Wars – The Force Awakens. It is a marketing machine seen everywhere: on Campbell’s soup cans, Dannon yogurt containers, Pillsbury sugar cookies, General Mills cereal, Kraft macaroni and cheese to name just a few. It’s even at Subway, and the cute commercial with the boy and his dad who lies (oh, the horror!) saying he has another son in order to get a special Star Wars kids’ meal is pretty memorable. I admittedly have been on this bandwagon – so far I’ve purchased the soup and the cookies, as well as copped two of the cute bagged meals for my TWO sons at Subway. So when Wayne suggested seeing Star Wars Episode VII: The Force Awakens I was on board (he’s usually the one responsible for choosing the “family” movie, often to the dismay of some of the brood). I can say that at the start, not all parties were thrilled with the choice… 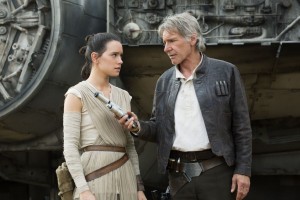 Like with other movie sequels, it really doesn’t matter whether a year has passed or in this case, 32 years, the transience of forgetting (known in psychological circles as the forgetting of rarely or un-accessed memories with the passage of time) lets us down. I remembered only VERY salient points from the first films. I personally should make it an imperative that I never see a sequel without re-watching the prior films in the days leading up to it. But as my 19-year-old daughter did say (she was one of the initially displeased) there was enough of a storyline for it to engage the audience, whether or not you’d seen the other films. In fact, she now wants to see the original trilogy! 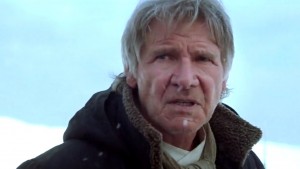 So what enchantments awaited us on the big screen? First it should be mentioned that stellar writing by Lawrence Kasdan, J.J. Abrams, and Michael Arndt is matched only by Abrams’ nailing of the film’s direction. Delivered in a way that should certainly make George Lucas proud, the nostalgic feel of The Force Awakens made me smile – the throwbacks in both plot and casting to the early films, including major screen time with the one and only Han Solo (Harrison Ford, of course), his trusty companion Chewbacca (Peter Mayhew), and Princess Leia (Carrie Fisher). Fewer but memorable moments were spent with C-3PO (Anthony Daniels) and R2-D2 (Kenny Baker); and finally with Luke Skywalker (Mark Hamill) who sets up the cliff-hanger for the next film. Performances by others such as Domhnall Gleeson as General Hux (whom I loved in About Time), Lupita Nyong’o as Maz Kanata, Max von Sydow as Lor San Tekka, provided a nice sprinkling of familiar faces. 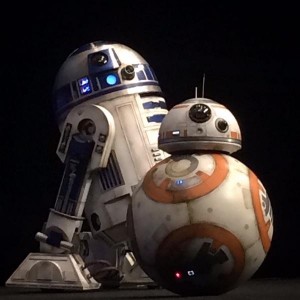 And without giving anything away (spoilers are unfair!) The Force Awakens introduces some powerful performances by relative newcomers, who no doubt were cast this way so as not to detract from the aforementioned heavy-hitters. We were introduced to the cute droid BB-8 (yes, robots can be cute!) with his human, pilot Poe Dameron (Oscar Isaac), who reminded me of a young Antonio Banderas. He blasts onto the screen with the swagger of the young Han Solo. Soon we met a fresh-faced, independent scavenger named Rey; a stunning and captivating performance by Daisy Ridley whom I predict will take Hollywood by storm the way Jennifer Lawrence did. A Stormtrooper FN-2187, dubbed “Finn,” played by John Boyega did a phenomenal job stealing scenes. And Adam Driver as the angst-ridden Kylo Ren delivered with all the bitter, raw emotion that you’d expect from a mentally unbalanced villain caught between dark and light. Ren, having been seduced by Supreme Leader Snoke (a huge holographic alien played by Andy Serkis), mirrored the ways in which a cult leader takes hold of a fragile and vulnerable psyche. 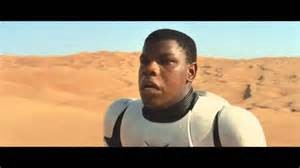 The film was action-packed and replete with layered characters. While heavily harkening back to the original, this revamping served as a way to bring a classic to a new generation of Star Wars fans; a complete story in and of itself, it leaves the audience wanting more. Star Wars Episode VII: The Force Awakens provided fabulous family fun and an opportunity both to revisit some of my childhood while at the same time, enjoy the realism and all that today’s newer cinematography and CGI have to offer. I’ve been personally re-Awakened to the Force and I anxiously will await the next installment – but in the interim, go back and re-watch the first trilogy (and then watch it all again before Episode VIII comes out!)