The powers that be at The Ridgefield Theater Barn are gamblers and risk takers. And I would know; I love gambling. But even as a gambler, I’m not sure I would take the risk that RTB took. They chose a Herculean undertaking. What was it? Choosing to do Educating Rita. First, it’s a 1980 British play. It has only two characters. It has only one setting. It’s dialogue-laden and fraught with British humor and nuances. And it’s been somewhat superseded by an award-winning film starring Michael Caine.

So did it pay off?

I am not going to play Poker with RTB, that’s for sure. I’d lose the shirt off my back. Educating Rita succeeds in educating us about the staying power and effectiveness of great theatre. 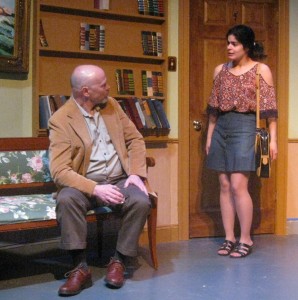 The play is a rip (and I mean that archetypes in a complimentary way) on George Bernard Shaw’s Pygmalion. For those not familiar with Shaw’s classic or the Greek he based it upon, think My Fair Lady or more recently, Pretty Woman. The play, written by Willy Russell, is about a 26-year-old woman who wants to better herself and her position in life through education. She enrolls in a university and decides to work with a mentor/tutor – a former poet/writer who is now an alcoholic, burnt out professor, barely surviving from paycheck to paycheck. Her name is Susan, but she adopts the name Rita in honor of her favorite novelist, Rita Mae Brown, author of the 1973 Rubyfruit Jungle. Rubyfruit was a book ahead of its time, dealing with explicit lesbian themes. Much like the novel, the character of Rita is wild and untamed with an unabashedly risqué sense of humor and outlook. She is in stark contrast to her mentor, Frank, who is refined, educated and conservative despite his penchant for whiskey. There is a clash of wills, values, morals and educational levels as the two embark on a year of study, work and tutoring. In the end, both student and master change and transform in ways that they never would have expected at the start of their journey. Without giving too much away, relationships rise and fall, social class structure and other institutional norms are analyzed and evaluated and ambition and love become two bookends vying for space on Frank’s shelf. 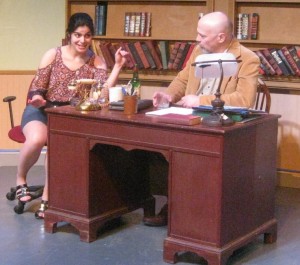 Nick Kaye (fresh from One Flew Over the Cuckoo’s Nest) as the crusty, stodgy Frank is wonderful. He had some big shoes to fill after Michael Caine’s award-winning performance in the film version, and he fills them nicely indeed. He made the part his own. His accent, mannerisms, and overall acting was impeccable. (And he’s a helluva set construction worker who had a big part in implementing set designer Timothy Hubenthal’s vision.) Lynette Victoria as the vivacious, thirsty for knowledge Rita is knock-down-drag-out fabulous. She is engaging from the moment of her entrance at the beginning of the play to her exit at the end of the play. She brings just the right mix of verve, bubbly enthusiasm, innocence and eventual sophistication to the role.

Special props must be given to the director Brian DeToma. It is an incredible task to stage and block a two character/one setting play and keep it interesting, fresh and entertaining. Mr. DeToma did a great job! Shout outs must also be given to the Producer, Panni Layton, and the Assistant Producer, Paulette Layton for producing such a wonderful show and enriching the community.

The world can be a wondrous place bursting with opportunity; and for each of us, we get to choose how much of it we want to inhabit and explore. For some, staying within their self-imposed boundaries and keeping their feet firmly planted on the ground is enough – for others who possess loftier aspirations, however, there may be an irrepressible compulsion to reach for the sky, as if it’s predestined – or even written right into their genetic code. 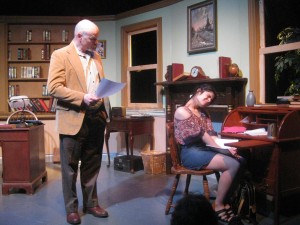 And so it is for Frank, the former; and Rita, the latter in Willy Russell’s 1980 play Educating Rita which we saw at fantastic Ridgefield Theater Barn. Frank is a disenchanted English literature professor who is caustic, bitter, and has thrown in the proverbial towel. He is tired of his students, weary of pedagogy, and most often, too drunk to care. Rita is an equally disillusioned hairdresser but she wants more out of life. She is 26 years young, married, and she doesn’t want the confines of a working-class existence, nor is she ready for children as her husband is. She is vibrant, honest, and outspoken but has little confidence in her intellect or academic abilities. So when Rita bounds into Frank’s office requesting his tutelage, neither realize much how much each will influence the other, nor how greatly both of their lives forever may be changed. 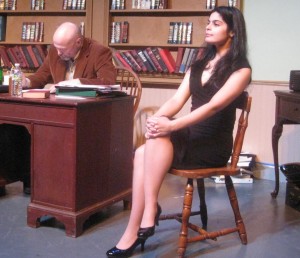 Frank, a character whose layers are peeled away throughout the play, is adeptly portrayed by Nick Kaye who is no stranger to the local theater community (see our One Flew Over the Cuckoo’s Nest review). He becomes the quintessential jaded, haggard, burned-out British academic who has grown to be something of a loner by choice. With bottles stashed behind books all over his office, it’s more than a surprise that he is able to remain afloat despite drowning himself regularly in the drink, including on class time. His world is but a dimming bulb until Rita arrives to illuminate his office, his mind, and his heart. 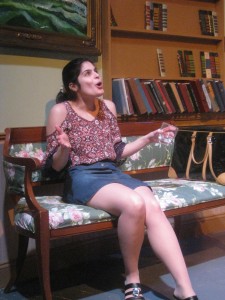 Lynnette Victoria (Rita) is a force of nature; she is dynamic, quirky, and vivacious. She embodies Rita’s Pygmalion-like naïveté while at the same time, portrays a woman with an exceptional inner strength. She spends her life following her instincts, seeming to care little about what others think. She knows she’s not a learned woman and is ready to change her entire existence through her pursuit of knowledge. And although Frank initially rejects her, she perseveres until she convinces him to tutor her. Each character comes to see traits in the other which they value, but which they don’t see in themselves; and each attempts to lift the other through their relationship. But the question becomes, will they be any more satisfied when set on this new trajectory?

On the surface, Frank as the teacher, is offering Rita a chance to become more than she is. In psychological terms this is known as finding the zone of proximal development. Rita, with assistance from a more learned person, can gain new knowledge – expand her mind – and eventually not need the help any longer. Through this, Frank offers Rita a deeper understanding of literature and in many ways, alters her view of the world. But as Rita gains this knowledge and confidence, Frank slips further into his own well of self-pity; the student surpasses the teacher. There are obvious parallels throughout the play to the changes seen in the two protagonists – an inverse correlation between her upward trajectory of growth and academic success and his personal and professional decline. 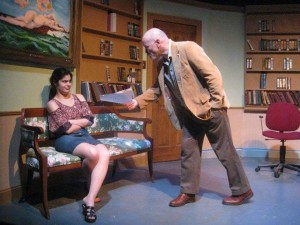 Kaye and Victoria are perfectly well-matched and they expertly play off of one another – essential ingredients in this dialogue-driven work. There are multiple scene changes, replete with Rita’s many costume changes, which sometimes seem a bit distracting, however, this is not a flaw of the actors, but inherent in Russell’s work. Of course it is designed to show the passing of a year, in which Brian DeToma directed the duo with a sure and skilled hand. A tremendous shout out must go to set designer Timothy Hubenthal and his troupe of set builders including Kaye, Panni and Paulette Layton, and Wayne Leiss as well as art by Glen River. The construction of Frank’s office, the single set throughout the production, was flawless.

As we have come to learn, The Ridgefield Theater Barn produces nothing but quality theatre – and for Educating Rita, a big hand to Panni Layton as producer and Paulette Layton for assisting. This quaint venue which offers wonderful cabaret-style seating, encourages BYO food and drink. To top it off, there isn’t a bad seat in the house. Dirty Rotten Scoundrels is up next on the mainstage and we can’t wait!