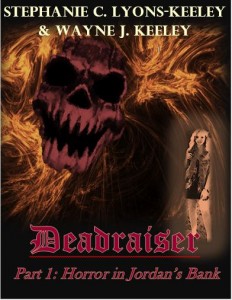 Someday Productions LLC is proud to present the launch of the novel DEADRAISER: Part 1: Horror in Jordan’s Bank on Amazon.com (Kindle) by Pillow Talking’s own Stephanie C. Lyons-Keeley and Wayne J. Keeley

Please Take Advantage of the Pre-Launch Period to Dowmload Part 1 and Review Prior to the Official Launch. Send an E-Mail to DeadraiserSeries@Gmail.com and Receive Part 2 Free When it’s Published!!

*Note: The title was changed from The Necromancer to Deadraiser prior to launch

Necromancy: an ancient black magic used for the purposes of communing with the dead. It is believed that practitioners of the dark art may harness the ultimate power of life and death and raise the departed for their own nefarious, malevolent purposes. It also is alleged that a true necromancer may realize the ultimate gift of immortality.

Deadraiser is the tale of a present-day practitioner who achieves what others have been unable to do for centuries – to raise the dead. The problem is that he must sacrifice innocent victims in order to maintain his power.

Enter Fanchon (Frankie) Manning, daughter of the late movie star Erika Manning. She is the ideal sacrificial lamb for the Necromancer’s perverse desires. The only thing that stands between the Necromancer and the girl is Christopher McGuire, a lost soul who long ago has ceased believing in anything. In order to save the child, he must somehow discover his faith again.

Stephanie is an award-winning writer, director, and producer. She has a Master of Arts in Counseling Psychology, was a former practicing psychotherapist, and was the director of a women’s work release facility in Lehigh County, PA. She currently is a professor of psychology at Western Connecticut State University and Naugatuck Valley Community College. Psychology serves as a big part of her and of her creative endeavors.

Stephanie also is a journalist, writer, editor, and has had innumerable articles published in various newspapers and magazines.

On a personal note, Stephanie is married to Wayne J. Keeley (see bio below) and they have seven children, three dogs, and a rabbit between them. Professionally they have penned countless entertainment projects for film, theatre, and TV, many of which are award-winning, and are in various stages of development. Most recently, they have written, directed, and produced both full-length and one-act plays in Connecticut and New York. As a writing team, their first fiction novel is under contract and will be published later in 2016 or early 2017. In addition, they have optioned a screenplay as well as having obtained the option for other fiction works by author Ray Hoy.

Stephanie and Wayne also have created a production company, Someday Productions LLC and a highly successful “He Said/She Said” blog called Pillow Talking. At Pillow Talking they conduct interviews with entertainment artists as well as review everything from entertainment works, culture, and travel to parenting and family. Please visit them at www.somedayprods.comand www.somedayprods.com/talking to learn more about and see updates on their varied projects.

Wayne is an award-winning writer, director, and producer. He is an attorney with a LLM from NYU and a Juris Doctor from St. John’s Law. His work in the law serves as great fodder for his entertainment works. He currently is the director of the Children’s Advertising Review Unit for the Council of Better Business Bureaus. He teaches film making and communications at Western Connecticut State University, and has taught at Fordham University, Audrey Cohen College, Baruch College, and Bronx Community College. His full bio can be found on Wikipedia at: http://en.wikipedia.org/wiki/Wayne_keeley.

Wayne’s oldest son, Wyatt, is afflicted with the disease Duchenne muscular dystrophy which often is the inspiration for many of his works with his wife, Stephanie.

We wish to thank our family (Kylie, Wyatt, Dylan, Chayce, Sarah, Aidan, and Brady as well as Joey and Elaine, Winann and Joe) for their unending love and support in all of our endeavors. We thank you for your patience and good will as we’ve jumped down nearly every rabbit hole in the hopes that at the bottom, we’ll find terrific wonderment to share with you all.

We also wish to thank our friends (you know who you are) for standing by us, coming out to support us, and for being such an important part of our extended family. We don’t know what we’d do without you all.

“If they stand by you during the bad times, they deserve to be there during the good times.” — Anonymous

LEAVE YOUR EMAIL ADDRESS AT DEADRAISERSERIES@GMAIL.COM TO RECEIVE PART 2 FREE!!!!