Review of CHRISTMAS ON THE ROCKS at TheaterWorks 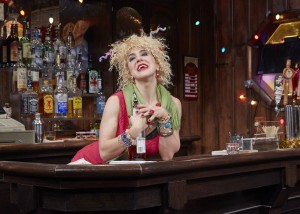 Christmas on the Rocks

For those who think that Christmas can no longer capture the magic it held when we were children, and think that those holiday television specials and old films can no longer evoke the optimism of the season, get ready to enjoy a truly original telling of old favorite stories at TheaterWorks, with their wacky, wonderful production, “Christmas on the Rocks”.

In the seven short plays with three actors playing a dozen characters, director Rob Ruggiero has given a gift to grown-ups who can remember “the good old days” through the eyes of some of the most iconic Christmas characters, all of whom have grown up themselves. The laughter is contagious and the parodies jaw-dropping, and the result is an evening of pure fun.

Seven noted playwrights including John Cariani, Jeffrey Hatcher, Jacques Lamarre, Matthew Lombardo, Theresa Rebeck, Edwin Sanchez and Jonathan Tollins authored the twisted tales that alternately bring the man (Matt Wilkas) and the woman (Jenn Harris) to a lonely bar on Christmas Eve, where the bartender (Ronn Carroll) helps lift their spirits. Each of the seven plays has a unique style and theme as the energetic actors infuse each character with vibrancy.  The first to arrive is grown-up Ralphie from “A Christmas Story,” complete with eye-patch.  When the bartender asks, “Did you shoot out your eye?” Ralphie informs him that no, it happened on the job. He’s now a “certified safety instructor for the NRA.” Get the idea?

The production team at TheaterWorks consistently realizes every detail in a production.  Michael Schweikardt gives the audience a seedy, but cheerful bar room, Alejo Vietti costumes the cast flawlessly, John Lasiter lights the stage with seasonal depth, and Michael Miceli interweaves sound clips from the old standards with contemporary music as a counterpoint to the nostalgia these stories evoke.

This is the third season for “Christmas on the Rocks” (each year’s roster of mini-plays is different from prior years,) and it deserves to become an adult Christmas classic. It is safe to say that the play(s) will make everyone feel the joy of the season, at the same time marveling at the actors’ skill and the best of holiday story-telling. This is one to definitely share with friends.

Originally posted In the Spotlight