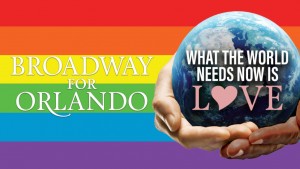 Broadway’s biggest stars united to raise their voices in support of the victims and those wounded in the Orlando shooting massacre, the worst in U.S. history, that took place at Pulse nightclub June 12—an act that targeted LGBTQ individuals and their allies.

The new benefit single, a recording of Burt Bacharach’s “What the World Needs Now Is Love,” which is produced in conjunction with Playbill at Avatar Studios, can now be downloaded at BroadwayRecords.com. It will be released on iTunes shortly.