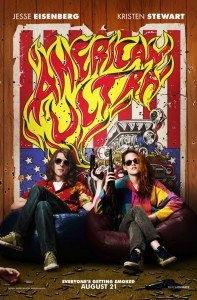 Unlike my other half, I love to go into a movie, a play, or even read a book knowing little about the plot or direction the story will go. I love to be surprised as the events unfold. And I’m always telling him – “NO SPOILERS!” for God’s sake, as each and every time he attempts to launch into giving me waaay TMI. Dodging any pre-film dialogue, I settled myself into my cozy red seat at the AMC last weekend to watch American Ultra (despite the fact that my oldest daughter had told me something about it and may or may not have shown me a trailer. Forgive me that I don’t remember; I’m the mother of four and soon-to-be stepmom of three more. Someone’s always showing me some kind of video, snapchat, vine, etc. and I may or may not be watching/half-watching – sometimes. Shhh. Don’t tell them.)

So before I set about to write this review I checked two things: #1, what the plot giveaways were so as not to SPOIL anything for you readers. And #2, the other online reviews. First, the brief synopses I read said lots more than I personally knew prior to going into the theater. And second, I disagree wholeheartedly with a number of the reviews. Many panned the movie and I can tell you, I was entertained for the entire 96 minutes. The ENTIRE time.

Jesse Eisenberg played the role of stoner/CIA sleeper agent to a T. And Kristen Stewart, despite her ups and downs both in the box office and in the media, was fabulous as his girlfriend/handler (I personally like her; please don’t hate.) The supporting cast (Connie Britton, John Leguizamo, Topher Grace, Bill Pullman, et al.) was spot on as well.

Reviews say the story didn’t know what it wanted to be; it was clear to me that it did know. It had the same conflict and gore of any other action/espionage flick, with a twist. And who was its audience, some reviewers ask? Well, taking from its “R” rating, clearly it is intended for older teens and adults. It is undoubtedly genre-blending and genre-bending. The theater could be filled with adults who enjoy action, comedy, a love story, and/or secret agent stuff, as well as those who aren’t bewildered or otherwise offended by heavy but humorous drug references.

Overall it is eclectic, at times absurd, but it’s inventive. The major players are larger than life yet amusing, even LOL hilarious at times. So often for me, movies stall or something happens which takes me right out of the story – but this one didn’t. Maybe it was mindless entertainment, but sometimes we need that. Not every movie needs to be about do-gooders or have a clear moral lesson. When I go see a film I want to be distracted. I want to leave my very harried, real-life existence for an hour or two and allow someone else to have done the thinking for me. American Ultra was a fun romp with plenty of AMC’s fresh popcorn to boot.

So America Ultra is yet another movie that has you scratching your head wondering what on God’s green earth the title has to do with the film? Obviously, the producers were targeting the same audience for Social Network and the Twilight series by casting Jesse Eisenberg and Kristen Stewart. It’s interesting that Kristin Stewart would play second banana to Eisenberg in what reportedly was a Twelve (12) million dollar budgeted flick. How far the mighty have fallen!

The plot, penned by John Landis’ “wunderson,” Max Landis, is catchy enough. A stoner living in a small town is actually a sleeper agent who gets reactivated just before the government decides to terminate him. It is “Clerks” meets “Kick-Ass.” I am certain that his day job as the clerk of a conveniences store was no accident, and I searched the credits for even a hint of Kevin Smith’s direct influence.

There are laughs. There are some great action sequences.   And both John Leguizamo and “That 70’s” alumnus, Topher Grace, are hilarious in supporting roles. So what’s the problem? The movies is missing something. Maybe it’s the pacing; slow at spots and too quick in others. Maybe it’s because the movie doesn’t know what it want to be when it grows up: a comedy? a drama? a thriller? a love story? While it mixes elements from all those genres, it feels more like an oil and water concoction at the end rather than a blended piece. Or maybe it feels unbalanced because the producers, not wanting to leave Ms. Stewart short-changed, built more of out of her character than was absolutely necessary. And speaking of character, despite at least three major reveals throughout the flick, there was very little in the way of character arcs.

Despite the flaws, the premise and acting were worth the peek.