A short, one-act play written, directed, and produced by Wayne J. Keeley and Stephanie C. Lyons was one of 30 plays featured in Manhattan Repertory Theatre’s (MRT) Fall One-Act Play Competition. Heaven Sent first competed in the fourth of MRT’s six series against four other plays. By audience vote, Heaven Sent received the highest score in its series and it moved on to the finals where it competed against five other finalists (one from each series). One finalist was removed from the competition after the first performance due to scheduling conflicts. Ultimately Heaven Sent went on to become the winning play for the entire competition.

Heaven Sent is a window into the life of a love-struck young man with early onset ALS (amyotrophic lateral sclerosis) who has been granted his one life’s wish. The play was inspired by co-writer Wayne Keeley’s eldest son Wyatt, who is afflicted with Duchenne muscular dystrophy. The play featured actors (in order of appearance) Keith DiRienzo, Emma Jean Delia, Egbert Bernard, Stephen Elrod, and Matt Heller. Alistair Ward served in the role of production assistant and all currently are of New York.

Keeley and Lyons of Danbury, CT have penned numerous other entertainment works. Of their work in theatre, most recently they also have produced and directed another short play Commuters which recently was a finalist in MRT’s Summer One-act Play Competition; and Life As She Knows It, featured with Heaven Sent in MRT’s 10th Anniversary Celebration, a non-competitive “crazy fun” event. In addition, Keeley and Lyons have optioned one of their original screenplays with indie director Austin Chick and producer Zachery Bryan of Home Improvement fame. And their production company, Someday Productions LLC, picked up options to produce screen adaptations of four thriller novels written by author, Ray Hoy. Additionally, Keeley and Lyons are bloggers and reviewers of entertainment works as well as recreation, travel, and family on their website “Pillow Talking.”

Heaven Sent was extremely well received and reviewed. Keeley and Lyons have plans to create a full-length version of the play.

Keeley and Lyons began Someday Productions LLC (www.somedayprods.com) as “A company dedicated to the creation of new and important projects for all genres in the entertainment industry.” Their myriad dually-voiced works include those for television, film, theatre, and books and are in various stages of development. Their Pillow Talking blog (www.somedayprods.com/talking) sheds light on the he-said/she-saids of everything from the entertainment industry to travel and parenting. 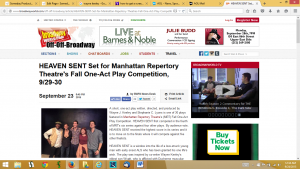 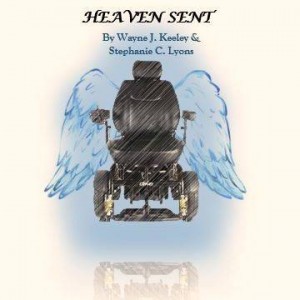 7/15  Someday Productions is proud to announce that it has optioned the film rights to author Ray Hoy’s critically acclaimed JACK FROST thriller series and three additional screenplay adaptations: “The World at Belly Button Level” (Family Series), “Maggie’s Way” (Romantic Casino Thriller based on the book by Jessie Fallon) and “The Black Rock Hotel” (Horror based on a treatment by The Sandman)

7/15  Someday Productions is proud to announce that its full length play, “WAITING FOR THE SUN” was accepted into the THESPIS WINTER PLAY FESTIVAL

7/15 Someday Productions is proud to announce that its one act play, “COMMUTERS” was selected for a reading at the LAMA Theater Company in NYC

7/15  Someday Productions is proud to announce that both its one act plays, “HEAVEN SENT” and “LIFE AS SHE KNOWS IT” have been selected to be performed at Manhattan Repertory Theatre’s  Tenth Anniversary Event

6/15  Someday Productions is proud to announce that it’s short one act play, “COMMUTERS” was a Finalist in the Manhattan Repertory Theatre’s Summer One Act Competition

5/15  Someday Productions is proud to announce that it has optioned one of its award winning screenplays to Bryant One (founded by independent Director Austin Chick and Producer/Actor Zachery Bryan).

5/15 Someday Productions:  Short one act, “Commuters” has been selected for performance in the Manhattan Repertory Theatre’s short play competition.