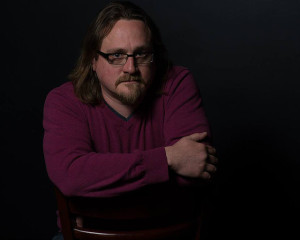 John co-founded Vagabond Theatre Company and serves as its Co-Artistic Director with his wife Tanya Feduik-Smith. A classically trained, dynamic, character actor, he has been working in CT theatre off and on for 20 years as an actor, producer, director, and acting coach. His full bio is included below. Get ready for this fascinating discussion of the passionate pursuit of art and theatre.

“We really started a theatre company, didn’t we?”

My wife, co-founder, and best friend, Tanya Feduik-Smith, said this last week during a welcome lull in the rehearsals for our upcoming production of The Scarlet Letter by Phillis Nagy. Establishing Vagabond Theatre Company hadn’t been a long and drawn-out discussion of the pros and cons that ended in a mutually agreed decision to proceed.

One day it wasn’t there, the next it was. It just simply had to be done. We had no other option.

You see, VTC was borne out of the closure of most recent incarnation of The Bijou Theatre in Bridgeport, CT. Tanya and I were brought on board as artistic consultants and producers for the upcoming live theatre season of The Bijou Actors Guild, following our well received production of One Flew Over the Cuckoo’s Nest earlier this year. In addition to all the usual administrative and artistic details associated with producing a season, we were looking at ways to expand the Guild’s programming and the theatre’s contributions to our community in downtown Bridgeport.

We started planning a schedule of staged readings for new works, to build on the success of our one-act contest the previous spring. We started designing acting, directing, and stage combat workshops. We took some preliminary steps to open a dialog with a local college about ways to work with their theatre students while another colleague had some discussions with individuals interested in finding mentors, scholarships, and in some cases auditions for the talented young adults we had come across on our stage.

If we let the Guild die, then these opportunities would wither on the vine. To us, that would have been the bigger tragedy than changing our address. There was just too much future at stake, and too much good work left to do. There was no other path for us along with a handful of other like-minded Guild members but to keep doing what we were doing.

When the final curtain came down on our time at The Bijou, we already had cast this unique adaptation of The Scarlet Letter and rehearsals had begun under Tanya’s direction. We asked the talented actors if they wanted to try and produce this thing in another venue, if we could find one. Everyone was in agreement that we should.

So we hit the ground sprinting, but the shift in schedules resulted in some serious conflicts for a few cast members which forced us to recast some roles. Once we filled those gaps, Tanya dove into directing Scarlet. The problem now was we had nowhere to rehearse, let alone perform. So the hunt was on. We found rehearsal space in a couple of cast members’ homes and then at Housatonic Community College; finally we were able to secure performance space at Fairfield University.

The constant shuffling of locations has coincidentally made our chosen name Vagabond right on the nose.

About six weeks into a frenzied pace of rehearsals, production, admin, and marketing work, we found some time to breathe, and it was in that moment Tanya asked me her question.

It was the moment we actually realized what we had started.

You see for us and the rest of our founding members, this is not a fresh start. Rather it is a continuance of the mindset and work begun with the first Main Stage show in our former home which led us to the pathway the Guild laid out earlier this year:

We have added a new item to this list since presently we are working in borrowed spaces:

To continue our progress toward these ideals, we started our first fundraising campaign a couple of weeks ago. Immediately, we had shows of support from several former castmates and colleagues. Their belief has encouraged us and breathed new life into our desire to continue producing the sort of work VTC is built upon.

The path ahead now is one of establishment and survival, not expansion, but our commitment to creating the powerful, thought-provoking work we always have has never been stronger.

We’ll just do it in a whole new space, or rather, sometimes many spaces in the span of a week.

The life of a Vagabond has proved challenging, but giving up is never an option!

Prior to founding the Vagabond Theatre Company,  John served as an Artistic Consultant at The Bijou Theatre in Bridgeport and Co-Producer of The Bijou Actors Guild. In his teens he lived in MD and attended student workshops at The Folger Library in DC and Improv Workshops with Jason Kravits and Robbie Chafitz. He also studied theatre at Slippery Rock University and Montgomery College. After marrying Tanya and moving to CT, they became involved with the efforts to reopen Stratford’s Shakespeare Theatre while taking Shakespearean technique workshops with Louis Burke. Through their involvement, they were invited to attend Playing Shakespeare USA, a weekend workshop with RSC Co-Founder, John Barton.

​Past area performances include Claudius in the repertory productions of Hamlet and R&G are Dead, Katurian in The Pillowman and Dale Harding in One Flew Over the Cuckoo’s Nest at The Bijou. He has also performed in New Haven including the title role in Hamlet and Jeff Symons in Murder in Green Meadows for Algonkuin Theatre Company, and Angus in Macbeth for Godlight Productions at Long Wharf’s Stage II. He has also appeared in productions at other theaters around CT including: Wilton Playshop, Clockwork Rep in Oakville, Town Players of New Canaan, and The Stratford Festival Theatre.