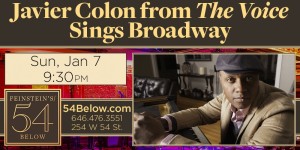 FEINSTEIN’S/54 BELOW, Broadway’s Supper Club, presents Javier Colon in “The Voice Sings Broadway” on January 7, 2018. Join the season one winner of the smash NBC television show The Voice as he makes his Feinstein’s/54 Below debut. Javier returns to his theatre roots to sing musical favorites such as “Maria” (West Side Story), “Bring Him Home” (Les Misérables), and “Hold Me in Your Heart” (Kinky Boots).

Joining the exceptional tenor for a truly unforgettable evening are several surprise Broadway guests! Additionally, music direction for “The Voice Sings Broadway” is provided by Caleb Hoyer (keyboardist for Broadway’s Anastasia); the show is directed by Broadway vet Amiee Turner; and is produced by Christine Brown and Renée Minahan.

“…while Javier might have been the first winner of The Voice, he remains one of the most talented artists ever to have graced its stage,” says AXS.Examiner.

Millions caught their first glimpse of Javier as he wowed America and Maroon 5 front man, Adam Levine, scoring a win on the inaugural season of The Voice, and landing a deal with Universal Republic Records. Since then, he’s released two full-length studio albums (Javier in 2003 and Left of Center in 2006) and a Christmas EP. Javier’s critically acclaimed Gravity was released by Concord Records in 2016. He performs all over the world for a growing loyal international fan base.

Javier graduated from the University of Hartford’s Hartt School of Music and soon after was lead vocalist for the Derek Trucks Band before launching his solo singing career. In 2017, he returned to his theatrical roots performing as Jim in a professional production of Big River, a role he also played in high school. Javier says, “When I was in high school, I had two career goals. One was to be a recording artist and the other was to be on Broadway. I’m so thankful that I can cross one of those items off my bucket list…Broadway would be a dream come true.” When not performing, Javier’s favorite role with his wife, Maureen, is as father to his children Solana, Amaia, and Mathias.

MORE ABOUT FEINSTEIN’S/54 BELOW

Feinstein’s/54 Below, Broadway’s Supper Club & Private Event Destination, is a performance venue in the grand tradition of New York City nightlife. A few blocks from the heart of Times Square and just below the legendary Studio 54, Feinstein’s/54 Below is a classically designed state-of-the art nightclub in the theatre district that hosts audiences with warmth and style. Feinstein’s/54 Below presents iconic and rising stars from the worlds of Broadway and popular music and has set a new standard for culinary excellence worthy of the world-class entertainment on the stage.

In their description of the venue, The New York Times writes, “Feinstein’s/54 Below has the intimacy of a large living room with unimpeded views and impeccable sound; there is not a bad seat in the house. Its sultry after-hours ambience is enhanced by brocade-patterned wall panels planted with orange-shaded lanterns. And the atmosphere is warmer and sexier than in Manhattan’s other major supper clubs.”

Located at 254 West 54th Street, Feinstein’s/54 Below features up to three shows nightly with cover charges ranging from $5-$105. 54Below.com/Feinsteins