The Hearse and the U-Haul by I.M. NOSFERATU 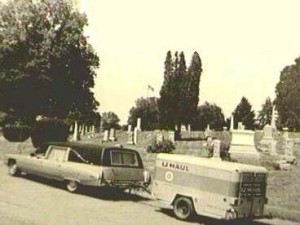 THE HEARSE AND THE U-HAUL

The hearse with the U-Haul tethered behind it

So Old Man Waters, the cheapest man in town

Only the paid cemetery workers and U-Haul driver

Were there to see him interred

Having negotiated a package deal for a refurbished

Coffin and three plots, six feet under was he while

The U-Haul with his personal belongings was parked

Over the two adjoining graves

Seventy-five years of collecting diamonds over

Wisdom and empathy left him bereft of any

Pried off by the grave robbers whose coffers

Were filled to the brim

After the first rain leaving the remains of the U-Haul

A rusted hulk of a tombstone rotting and decaying