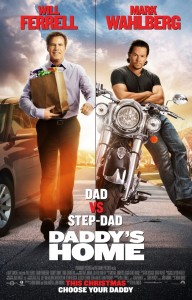 People can be categorized by the way they laugh at comedy movies. First, there are the smilers – with maybe a few ha-has thrown in; it takes a lot for these types to really laugh out loud. Next come the chucklers. Then the guffawers. And finally the loud and sometimes obnoxious belly laughers. I tend to be in the first category – the smiler with the modicum of ha-has; something has to hit me really hard to eke out the laugh-out-loud stuff. Most straight comedies I find sophomoric like 21 and 22 Jump Street, Bridesmaids (okay, it had a few laugh-out-loud moments), Dumb and Dumber, and both Anchorman movies to name a few. Straight comedy is tough; it’s subjective and difficult to sustain over two hours. I know this first-hand having directed a straight comedy-farce years ago (and swearing I’d never write or direct comedy again).

So I’m admittedly tough on comedies. Airplane and Animal House are classics. Recent favorites of mine include The Hangover, Get Hard and now Daddy’s Home. During Daddy’s Home, I morphed from a smiler to a guffawer (and even had several belly laughs – the kind that double you over and bring tears to your eyes). 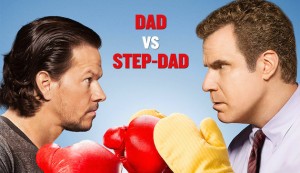 Maybe it was nature of the material that made me enjoy it so much. I just became step-dad to four children and my wife and I now have a blended family with seven kids total between us. Daddy’s Home is about average Joe (albeit a bit on the geeky side) Brad Whitaker (Will Ferell) who marries his soulmate, Sara (Linda Cardellini), and finds himself as an immediate father to her two young children, Megan (Scarlett Estevez) and Dylan (Owen Vaccaro). He is just at the point of being accepted into the role of father when their biological father, Dusty Mayron (Mark Wahlberg) shows up out of the blue with the sole purpose of usurping Brad and reclaiming his place as king of the household. Dusty is, of course, cool in every way, his style of dress, choice of transportation (a motorcycle) and sheer physical prowess. When he shows up, the game is on and it’s a hilarious battle between geek and hipster for the love and attention of the children as well as the mother. 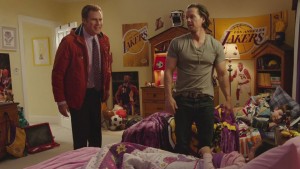 The movie raises certain serious and sensitive issues about “blended” families in today’s society but treats them in acomedic manner. While I could not relate to all of the issues, there was some common ground that was particularly relevant – like the sometimes awkwardness in communication and affection between step-parents and step-children. Like all good comedy, the movie takes relatable issues and makes them funny so that we end up laughing at ourselves. Daddy’s Home is excellent at doing this.

Part of its comedic success is the great cast. Will Ferell is generally a hit or miss for me, but in this movie he definitely scores as the mild-mannered, good-intentioned, wannabe dad. His chemistry with co-star Mark Wahlberg is tangible. Of course, Wahlberg is solid in whatever he plays, whether it be good guy, bad guy, teddy bear sidekick, or in this case, cool dad. Linda Cardellini as Sara makes the perfect wife/ex-wife caught in the middle between an irresistible force and an unmoveable object.  Special shout outs have to go to Thomas Haden Church (Brad’s boss) and Bobby Cannivale (Dr. Francisco the fertility doctor), both of whom steal many a scene.  And, finally, a special high-fiver goes out to Hannibal Buress (Griff) who’s deadpan character is knock-down-drag-out hysterical.

Daddy’s Home explores the differences between what makes a “father” and a “dad,” but does so in an entertaining and endearing way. I would rate it “5 Belly Laughs” at least.

I love a Laugh-Out-Loud kind of movie. The busy, crazy, chaos of my life deserves the occasional don’t-have-to-think-too-hard kind of escapist entertainment of a simply funny piece of film work. That’s what Daddy’s Home gave us and several of our brood this weekend. But for me, there was more.

You see, I was a single mom for a very long time. Now I’m fortunate to be married to a wonderful man who also is the stepdad to my four children. There were many scenes which rang true in the film – because for me, even though it was often pure silliness, Daddy’s Home made me pause several times. And seeing it with three of my children, it also made me wonder what they might have been thinking at the times when I saw beyond the humor and into the deeper messages. 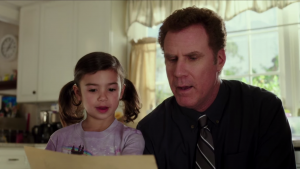 Daddy’s Home starred the inimitable Will Ferrell as Brad Taggart, the khaki-wearing, lunch-making, Ford Flex-driving, tries-too-hard stepdad to two adorably precocious children, Megan (Scarlett Estevez) and Dylan (Owen Vaccaro) who don’t immediately accept him as the man in their lives. He’s married to Sara (Linda Cardellini) who is successful, beautiful, and grateful for her children to have someone who cares about them and who sticks it out. When motorcycle-driving, fairytale story-telling, Disney Land-dad Dusty Mayron (played to a “T” by the often shirtless Mark Wahlberg) comes for a visit, all hell breaks loose. The kids are torn and lured into the maelstrom of the dads’ pissing contest.

I love Will Ferrell as the put-upon, straight man – his self-effacing, takes-it-on-the-chin nature is a role seen in 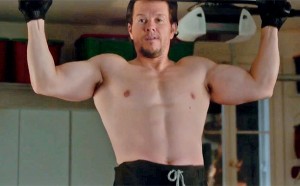 others of his films and he does it well. Brad is the endearing guy who willingly takes everybody’s s@#t – and even Dusty tells him so in the nicest of ways. And I love Mark Wahlberg as – Mark Wahlberg. This isn’t the first time he’s been cast as the adversary who is half-clothed. Mark has no problem showing off his big guns. The two of them have great chemistry and their verbal fencing over everything from Sara and the kids, to how to deal with bullies and fertility issues will have you rolling. And the final scene (no spoilers) is well worth waiting for!

The sometimes third, fourth, or even sixth wheel tossed into the veritable mix is Griff (stand-up comedian Hannibal Buress) who might have been the hired handyman off of Angie’s List, but whom Brad discharges. Griff throws numerous comic wrenches into the family works by staying on, essentially squatting in the house, raiding the refrigerator, and demanding that videos of Frozen NOT be paused.

Ultimately the question is who does it best? The “father” or the “dad”? Who can and will step up? Personally I know what it’s like to have children experience absent-parent syndrome. The dad, the one who’s present, constant, and loving wins out for me every time.

Take the time to see Daddy’s Home and see who can “stay inside the cones” – this flick isn’t likely to receive any award nominations, but it’s a fun hour-and-a-half romp and for some of us, there are a few extra layers to peel away. 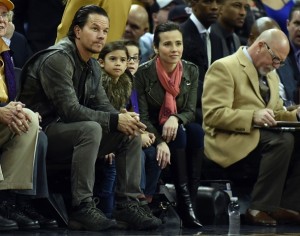