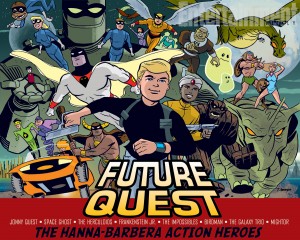 Get ready to go from Hey Boo Boo to Yabba Dabba Doo! Bringing back the days of Saturday morning cartoons, DC has created a universe of Hanna-Barbera characters the likes of the Council of Doom! Characters in the opening issue include Jonny Quest, Birdman, Space Ghost (better than his last iteration at DC), and many more. This month DC also is rolling out numerous comics inspired by Hanna-Barbera which range from Scooby Apocalypse and Wacky Raceland to The Flintstones. The best thing about this universe is that DC is revamping the characters to meet the 21st century, with new storylines and other much needed overhauls, however they keep the classic charm that made us fall in love with them all!

Jeff Parker and Evan Shaner team up once again and do both William Hanna and Joseph Barbera proud. The tone digs through all the nostalgia and the story jolts the characters into the 21st century in a seamless way. Although campy, this issue strikes some FEAR into the readers and the Quest team. It was nice to see that the art provided by Shaner recaptured the classic animation style. The issue switches artists toward the end with Rude stepping in – this still provides a nice nostalgic vibe.

Dr. Benton Quest is in the Everglades investigating strange anomalies that have sporadically appeared around the globe. He sends out Jonny and Hadji to get a closer look with the help of Race. Inter-Nation swoops in to survey the impending global crisis; however, things go south when the Quest team finds they aren’t the only ones investigating the swamp…then Space Ghost appears from the Coast (to Coast).

Great art, a revamped storyline for old favorites, and a collaboration of Hanna-Barbera characters – what’s not to love?! Another nice benefit from this comic is that regardless of your background and familiarity with these characters, everyone can get behind it and enjoy a good read!