Someday Productions LLC and Pillow Talking are pleased to present the following review of  You Are a Badass: How to Stop Doubting Your Greatness and Start Living an Awesome Life and The Universe Doesn’t Give a Flying Fuck About You 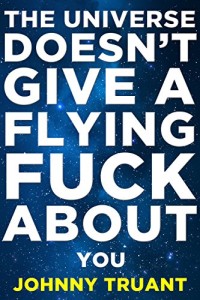 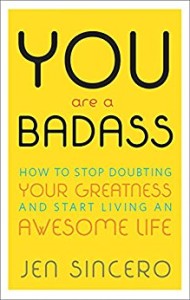 You Are a Badass: How to Stop Doubting Your Greatness and Start Living an Awesome Life by Jen Sincero

As most of us know, the book publishing business, like Hollywood, jumps on the hottest marketing trends then milks them until the cow dies and they’re forced to search for alternate sources of sustenance. That being said, it’s obvious that the book industry’s current predilection is to publish titles which include as many of the late George Carlin’s seven dirty words as possible in an attempt to get the attention of potential buyers.

I myself have read and previously reviewed The Subtle Art of Not Giving A F*ck which, despite having more F-bombs than a raunchy, R-rated comedy film, I found it to be really nothing more than traditional Buddhist philosophy in cruder wrapping paper.

The same can be said for my most recent reads: YOU are a BADASS – How To Stop Doubting YOUR GREATNESS and start living an AWESOME LIFE (the words in ALL CAPS actually are accentuated that way on the book’s cover) by Jen Sincero and The Universe Doesn’t Give a Flying Fuck About You by Johnny Truant. The former is nothing more than a rehash of just about every book on the law of attraction – from The Secret by Rhonda Byrne to Wayne Dyer’s Manifesting Your Destiny. That’s not to say the book is worthless; indeed, in many ways it serves as an excellent compilation and distillation of the tenets found in the dozens of bestsellers that have been written on the topic. So for the newbie manifester, it does have a wealth of information. But for those of us law-of-attraction veterans who have read and watched the DVD of The Secret until we could recite it by heart, there is little, if any new material or suggestions for applying the information in a different way to your life. A good example of the main thematic elements of the book can be summed up in the following paragraph:

All you have to do is make the choice to let go of everything you’re so attached to that’s not serving you and manifest the reality you want. Life is an illusion created by your perception, and it can be changed the moment you choose to change it.

How many times have you read something like that in a book on attraction and manifesting your destiny?

A similar marketing approach (or should I say tactic?) is used in The Universe Doesn’t Give a Flying Fuck About You. A heavy F-bomb title wrapped around what is, in reality, a rehash of the iconic bestseller Don’t Sweat the Small Stuff. Since we are all bugs about to be crushed by the universe at any given moment, unlike the existentialism of Nietzsche, we should be like the Greek King Sisyphus who was condemned for eternity to keep pushing a boulder up a hill only to see it roll back down. If we want to avoid being crushed, we’d better get off our duffs and do something Truant tells us. Indeed, this entire book may be picturesquely summed up in the following excerpt:

Do yourself a favor, right now, and realize two things:

This is game time, champ. You’re in. You’re in playing, right now, and the clock is ticking.

So stop wondering what it all means and how you’ll possibly ever do X and what people will think, and get on with your life already.

Stop being a pussy and go do something amazing.

How many times have you heard that before in motivational books? Well, maybe you didn’t read those exact words, but the underlying message to get out there and try something different and not be afraid to fail is a virtual staple of every self-help book ever written. Your parents probably told you the same thing, too.

Once again, it is not the content of these books with which I have a problem, but rather the way they are marketed. You think you are getting George Carlin’s seven dirty words routine and about a quarter of the way in you realize you are really just in Mr. Rogers’ neighborhood. All of these books are nothing but Oreo cookies – dark and hard on the outside and light and fluffy on the inside. It is only a matter of time before enough readers will get tired of the bait-and-switch-approach so that authors and publishers will move on – hopefully – to a more straightforward marketing approach.