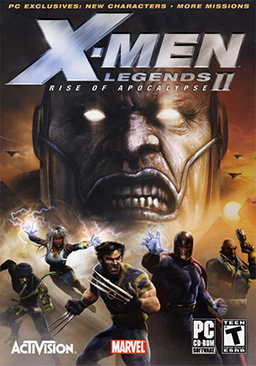 With the release of the recent X-Men: Apocalypse movie, I feel we should acknowledge the game that came out 11 years ago, X-Men Legends II: Rise of Apocalypse. As compared to the first game, X-Men Legends, on the surface it appears that with Apocalypse, they just redid some skins and added new playable characters. Many felt it was a bit of a lazy remake; however, I completely disagree. The developers may have taken a few shortcuts, much like a student doing a school project who wants to rush to finish, but I feel the story is clearly expanded and it is more enjoyable to play through than the first game. Plus Apocalypse opens up the chance for gamers to not only play their favorite X-Men but also their favorite Brotherhood characters.

There is a great deal of diversity in this game with over 18 playable characters (depending whether you play console, PSP, or PC). If you unlock every one, you can create some interesting teams out of all the characters. For example, you can have Professor Xavier and Magneto be on the same team or you can have all the Elementals characters team up for an ultimate combo of punishment with different ways to burn your enemies. With the ability to choose over 81 different team rosters, it makes gameplay interesting for hours.

Besides the various player choices for your team, another interesting element definitely is the story. You can travel to Greenland, The Savage Land, New York, and even Egypt. All the while, you can play through a multitude of interesting and complex villains who either want to fight you because they are with Apocalypse or simply because you happen to be at the wrong place at the wrong time.

As for some of the game’s negatives, there are characters whose abilities play out very similarly to one another and it does make things a bit boring at times. Also, character movement on maps sometimes is a bit blocky and you even can fall through floors or walls. Furthermore, this particular style of gaming is something that takes a little bit to get used to.

I think it’s a shame that there never was a sequel to X-Men II: Rise of Apocalypse because I feel it was an unfinished story. There could have been any number of follow ups, including Apocalypse’s return; or Mister Sinister could have stepped as a main super villain instead of staying something of a weasel in the shadows; or they could have added some other villain. I’d personally like to have seen Dark Phoenix as a mastermind villain who plays everyone from start to finish.

Overall, I wish they had delayed the release of this game so that they could have worked on it a bit more, making it longer and perhaps smoother, and they possibly could have added more playable characters. I also wish they had made Professor Xavier in his wheelchair instead of giving him a battle suit that gives him the ability to walk. Sometimes the simplest thing can be the coolest thing; in this case, a man in a wheelchair stopping all-powerful villains. That would bring a smile to my face, bub.