It’s every parent’s worst nightmare. You send your child to school, expecting that for six or seven hours a day, five days a week, 180 days a year, they’ll be in the protective care of educators, in an enriched learning environment, where they may also have a bit of fun and socialize with their peers. But suddenly your world is shattered – you get a phone call, or you hear an alert on the news – there’s been a shooting. You’re frantic. You can’t get any information. Police and other emergency personnel fill the school grounds. What is happening? Where is your child? Has she been wounded? Has he been killed?

The lists of such tragedies are endless: Columbine, Virginia Tech, Sandy Hook, Marjory Stoneman Douglas, along with countless others whose names I don’t know but feel that I should, because each one of those heinous incidents deserves to be remembered and every life taken, never forgotten. And somehow, some way we all need to do our parts to ensure that events like these will not continue to happen – that the words “school” and “shooting” are never again uttered in the same sentence.

Playwright Matthew Greene expresses these sentiments and his passion about the issues is evident in his powerful production Thousand Pines. In his program notes he states, “To be honest, I’d love for this play to stop being ‘relevant.’” Because he says, “that would mean we had found a way to overcome the scourge of public shootings.” But since one man alone cannot take on nor accomplish such an enormous task, he has instead chosen to spread the word, helping to increase public awareness through his compelling, artful storytelling. 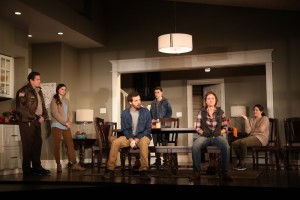 The searing Thousand Pines is at the same time simple and complex. It is a tightly packed, layered, evocative piece that intertwines the stories of three families who have all been impacted by one middle school shooting incident. Greene uses the same six actors in separate but overlapping scenes; they are referred to in the program only as Actors 1-6. It occurs to me that this namelessness suggests these individuals could be any of us; and while we should never experience this kind of horror, the upheaval and our subsequent emotional responses might be just like theirs if we did.

The drama opens in the dining room of a beautiful suburban tract home on Thanksgiving day. We learn this is the first holiday celebration since the unspeakable tragedy and each family must find a way to fill a different yet similar void. They all have lost someone – a boy – at the hand of a gunman. Everyone and every family has been shattered. They are all are bumbling about, trying to get through this particular day as well as the rest of their lives. At the outset, we have no idea how they are connected, except through their shared experience and their resultant pain.

It is no surprise Greene has opted to tell the tale around the Thanksgiving table; holidays are apt to bring out both the best and the worst in people. For these families, it is like that on steroids. A dark shadow has been cast upon the festivities, on a day when most are considering what it is for which they are thankful. While zipping around the holiday bird with all its trimmings, the characters are traversing the minefield of Elisabeth Kübler-Ross’s stages of grief. Some are stagnated in the stage of denial while others are just plain angry. Depression also rears its relentless and overpowering head; but for a few, there may just be a hint of acceptance. For the audience and as voyeurs to the action, however, theirs is a pain so visceral, that unless one has lived through it, the depths of it cannot possibly be fathomed.

Greene’s writing is truly exceptional. He’s successfully conceived three very distinct family scenarios, illuminating the vast range of human nature and the markedly different way people cope in this type of aftermath. He displays in many ways that while grief is universal, individual human responses are not. Greene also keeps some secrets from us – some things are close to the vest and are later revealed as the story unfolds. This is an integral part of his storytelling, enabling the audience not to be distracted by detail, and to instead connect with each character’s personal emotional rollercoaster. 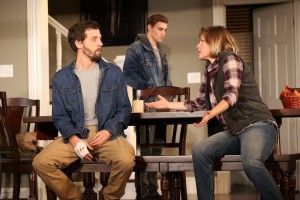 Thousand Pines director, Austin Pendleton, whom I fondly remember as the oddball public defender in the iconic film My Cousin Vinny, is also a playwright and teacher. He uses a steady, expert hand in guiding the six talented actors through Greene’s complicated dance. Kelly McAndrew (as Actor 1) is the central character in each scenario – a mom, albeit always a very different one. She superbly transforms herself from the humming, denial-laden Martha Stewart matriarch, to a tortured (step) mama bear, and finally to the single mom who now can barely find the energy to put on her pants each morning. William Ragsdale (Actor 2), Anne Bates (Actor 3), Joby Earle (Actor 4), and Katie Ailion (Actor 5) appear in each scene as different friends, family, and support people, also with excellent transformations. They all adeptly do so even while the backdrop of the identical homes does not change. Andrew Veenstra (Actor 6) is the only performer who remains as a singular character, serving as the thread which eventually ties each story together. It’s an ending that will practically take your breath away.

With impeccable attention to detail, kudos for the flawless set go out to Scenic Designer Walt Spangler. Shout outs also to Barbara A. Bell for costume design; to Xavier Price for lighting design; to Ryan Rumery for sound design and as Composer; Michael Rossmy as Fight Director; Roxana Khan as Production Stage Manager; and to Tara Rubin Casting.

I remember the date December 14, 2012, all too well – the day armed gunman Adam Lanza opened fire at Sandy Hook Elementary School. Less than 20 miles from my home and a short drive on the interstate, I heard the news and was beside myself; I couldn’t wait to embrace my four children (then ages 16 to 7, the youngest being the same age as some of the Sandy Hook victims) when they were released from school. Despite living so close to the incident, I only indirectly knew one of the victims; she was a young substitute teacher with whose mother I had worked for a number of years. I can say it took a very long time to recover from the tragic events and to feel secure in my own children’s school’s safety protocols.

Thousand Pines brought back some of those feelings – and it has also led to much dialogue after the lights came up. School violence continues to be an ongoing issue and if Greene’s thought-provoking work does nothing else, I sincerely hope that it addresses the need for more conversation as well as calls to action to protect our children and us all.

If push came to shove, I am not so sure that I would define the world premiere of Thousand Pines at Westport Country Playhouse as simply a play. It is certainly an analysis of grief and how three families deal with it; a cautionary tale; and a morality tale for today’s society. To be more accurate, it is a searing, thought-provoking, electrifying theatrical drama. It is one that stays with you like a wound that just will not heal no matter what you do.

The action takes place in the dining room of three identical tract houses (hence the clever need for only one set) on Thanksgiving day a year after a random violent act of violence at a middle school took the lives of three children. Yes, it involves a school shooting, but the incident is not the focus of the drama, rather it is the launchpad into an intense study of the aftermath of such a horrific event and how grief has affected the nuclear and extended families of the three dead children.

The cast is wonderful. Six actors (with the exception of one) triple as the diverse set of characters in the three sets of families. Without giving away anything, clever casting of the actors in the various roles serves as its own conceit for moving the story along as well as underscoring exposition. The cast which are simply known as Actor 1 through Actor 6 include: Kelly McAndrew, William Ragsdale, Anne Bates, Joby Earle, Katie Ailion and Andrew Veenstra. Each actor exhibits incredible control over their instrument as they play characters who are as different as night and day. 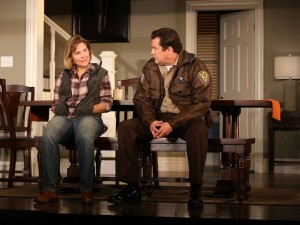 The writing by Matthew Greene and direction by Austin Pendleton are brilliant. Indeed, Mr. Pendleton, veteran of both acting and directing, has created an almost surrealistic atmosphere which, like putting together a massive jigsaw puzzle, becomes clearer and more visually realistic as time goes by. (I was going to use the metaphor of ice on a windshield which totally obscures any view until it melts away, gradually revealing reality. While the drama is more akin to a puzzle than a car, although the gravamen of both metaphors is appropriate). Indeed, Mr. Pendleton takes the audience on a game of sleuthing, where Easter egg – or more appropriately, clues – are dropped throughout the piece until the final denouement is revealed. And what a reveal it is.

Thousand Pines is a heavily layered and nuanced play that cannot be adequately dissected or analyzed in a mere review. It needs to be seen, experienced, thought about, and discussed – which is precisely what it is meant to do. If there is only one intense drama that you can see this year, this is the one.