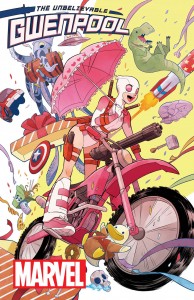 Who??? Don’t worry she is relatively new borne of a Gwen Stacey variant in Deadpool’s Secret Secret Wars #2 just last June. Marvel’s design went viral and they had little choice but to put her more in spotlight. She isn’t Gwen Stacey – just to make things clear she’s Gwen Poole! She’s reckless, she’s irresponsible, but most importantly she’s Gwenpool! Though she has been around for less than a year, she has appeared in a few titles including her own one-shot this December. It is an honor when a character is bestowed their first series!

That being said the story eh…it’s not terrible but it isn’t that great either. At times it seems as if Marvel is trying too hard to make a comparable version of DC’s Harley Quinn. But the story seems like a Deadpool rip-off with a few exceptions. First, she thinks she’s in a fictional world and treats it like, Stop me if you heard that before. At first Gwenpool thinks there are no consequences for her actions but after experiencing a few tragedies, she starts to get the hint. So I wasn’t too thrilled with this issue, although the combination of her and MODOK going forward might improve the story (but don’t hold your breath).

The only reason this comic isn’t a total waste is due to the art stylings of Gurihiru. The manga inspiration of the group lends very nicely to the overall theme of Gwenpool!

While other reviewers might rate higher on this comic, I likely break that trend as my sense is it is merely a rehash of the same old same old. The bottom line for me is it’s not great, it’s not terrible – I can take it or leave it.