Pillow Talking’s Review of THE PURGE: ANARCHY by I.M. Nosferatu

Someday Productions LLC and Pillow Talking are pleased to present the following review of  THE PURGE: ANARCHY by I.M. Nosferatu 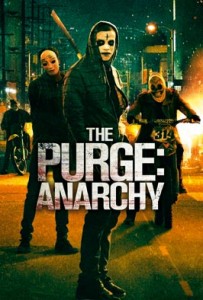 With the July 1, 2016 release of The Purge: Election Year, written and directed by James DeMonaco, I went back to give you a piece of my mind about his first in the series, 2013’s The Purge. Now I’m going to rant about the second installment, 2014’s The Purge: Anarchy. What can I say? I’m a fan of genocide (okay, the fictional kind) – don’t hate.

So it’s back to the kill-who-you-want-with-no-repercussions spree of glee as I dubbed it in my review of the first film in the series – but that doesn’t mean it’s just some re-masticated version of the same…because in Anarchy it’s not bullsh*t, stuck-in-the-house, wipeout-a-single-whimpering-family, jump-out-of-the-closet kinda stuff. C’mon, for real this ain’t some rated-G, kiddie hide-and-go-seek, weak-kneed, pseudo thriller…this time around it’s what I’d hoped to see with #1 (not that I didn’t enjoy the first, because I did). But now we have The Purge on steroids. You know, the sick, badass juice that feeds aggression and pumps up endurance and performance – yeah! Yeah! YEAH! It pumps it up to Krugerian Level goings-on. 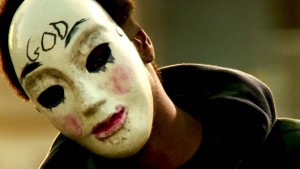 So here we are; it’s fast forward to 2023 and time for the 6th annual killer-lust fest – and DeMonaco takes us out on the street where there’s nowhere to friggin’ hide; not your barricaded apartment, not the underground subway caves, not your friend’s house, NO WHERE! No matter where you go, there are sick mo-fos ready to take you down, blow your brains out, and splatter them to kingdom come. Even the old man in the moon was wearing the RED like it was a Halloween masquerade party (more like Halloween massacre). I’ve gotta ask, are there other people exist in this world who have my same gray matter? I thought I was the only one who lives, breathes, and loves the excitement of death and dying – call me and DeMonaco twin thanatomaniacs separated at birth.

There’s mama/waitress Eva Sanchez (milf Carmen Ejogo) and her mini, Cali (the sassy, sharp-tongued Zoë Soul), who are devastated to learn that terminally cancer-ridden Gramps (woe, poor John Beasley) has decided to sell his body (and ultimately his soul) for a measly $100K to a pack of wealthy elitists for their sick pleasure in a family bonding, country club-style Purge (formal dress, plastic sheets, machetes, and all). Then the pair are attacked by the lecherous pig, building superintendent Diego (you dog, Noel G.) but he sure as hell gets his when some whack-a-do paramilitary dudes end up breaking down the walls of the crap-hole apartment. Diego had that mess coming and suffice it to say, it was like a shark attack. But poor Eva and Cali are in dire straits with no protection out on the streets from “Big Daddy” (a terrifying Jack Conley) who yearns for his own personal Purge and the pleasure he gets feeding off their fear – love that dripping butcher’s apron and the shades, ya freak (channeling some Corey Hart “[I wear my] Sunglasses at Night”). Damnit to hell when the not-so-goody-two-shoes, man on an entirely different mission Sergeant Leo Barnes (a Ripper smooth Frank Grillo) reluctantly comes to their rescue. They’re safe, at least for a while.

You’ve also got the bickering, on-the-verge-of-divorcing couple Shane (be a man Zach Gilford!) and Liz (hottie Kiele Sanchez) who can’t get their wedding rings on straight. Really? You just went shopping together, how bad can it be? Get your heads out of you’re a**es, they aren’t hats, people. Figures they wouldn’t notice when those masked biker scums in the parking lot were screwing with their car – which, duh, breaks down not minutes away. And now they’re pitifully trying to hoof it to safety before the sirens blare to start the annual festivities. Nope, a pair of sneakers and some fancy heeled boots ain’t gonna get you far when these psychos are on a no-one-left-standing mission with weapons and wheels.

Everyone’s doing the annual on a big scale this time. It goes well beyond getting rid of the lower class, or even taking down your haters because of childish playground vendettas, getting back your boss for not giving you the bigger office, or “I’m gonna get you for running over my dog I should-a had on a leash” – this definitely ain’t no theme for a Carrie Underwood country song. These sickos in Anarchy don’t even need a reason – just the passion for the kill – they’re like my kinfolk from other mothers.

And in Anarchy you’ve got it all out in the open like I said before; but you’ve also got pyrotechnics, lots of fancy-dressed blue bloods, pill-popping, heavy imbibing, family squabbling, adultery, sororicide (look it up), vigilantism, and human hunting – think Hunger Games on the ’roids. It’s a roller coaster of fun – my kind of fun, and I don’t need no nad-shrinking gym candy to feel this burn. I’m personally injected to the cosmos without it.

But what you don’t need is to have seen the first to appreciate the depraved, violent politics here – the country’s New Founding Fathers who’ve generously offered the masses a special kind of catharsis to kill and commit crime during a 12-hour no-penalty period. Their redonkulous purpose is the same: keeping unemployment and crime down the rest of the year. In Anarchy, the years have marched on and the government has fine reasons to keep the Purge going because it’s working – it continues to be good economics. The only thing is, there’s now a hitch because there’s some kind of anti-Purge resistance group trying to stop it and that is just not okay with me – or the vagrant from the first movie, Edwin Hodge as The Stranger, who’s suddenly not a lone wolf looking for refuge. He’s fighting to end the Purge alongside the group’s leader Carmelo Johns (the cool-as-ice Michael K. Williams) and kill anyone who gets in the way.

Kudos DeMarco, you amped things up – the pace, the body count, the adrenaline rush…

I can’t wait to throw The Purge: Election Year at you. Soon, peeps, soon. Don’t stroke out waiting for it. See the first two and maybe throw in a few Halloweens or Friday the 13ths for good measure. I’ll be back (said with the Terminator’s fine guttural articulation).