Pillow Talking’s Review of THE PHANTOM 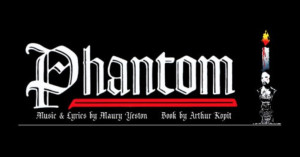 I fell in love with Broadway when I was in my teens, seeing many of the classics during those years: Cats, Les Misérables, and The Phantom of the Opera. In fact, with the exception of Evita which I saw much earlier when on an elementary school field trip, I attended all the aforementioned productions twice, each of which left an indelible imprint on my culturally-ripening mind.

Since that time, I’ve experienced countless other theatrical productions, both professional (Broadway, Off-Broadway, and regional) as well as community and school. I’ve gone on to see film versions of both Les Misérables and The Phantom of the Opera, and also recently saw the sequel to The Phantom of the Opera, Love Never Dies, both of which were written by Andrew Lloyd Webber. But what I’d never seen and knew very little about is the less oft-produced version of the story known simply as Phantom, created by Tony Award-winners, Maury Yeston (music & lyrics) and Arthur Kopit (book). Reading the backstory of Yeston and Kopit’s journey is a tale in and of itself, but in a nutshell, finances and timing had been against them and Lloyd Webber planted his very large stake on the Great White Way first. Yeston was quoted as having said about his and Kopit’s version that it was “the greatest hit never to be produced on Broadway.”

Their quite different story is a favorite to many and perhaps most especially to the creatives at Westchester Broadway Theatre (WBT). Just a little over a year after the musical was resurrected and hit the stages of the Theatre Under the Stars in Houston, WBT mounted it themselves in 1992 where it ran for a record nine months (it went on to play there twice more in 1996 and in 2007). And for those of us who never had the opportunity to make those trips to the Elmsford, NY dinner theatre for it, it is back yet again! I guess owners and executive producers Bob Funking and Bill Stutler (and their audiences) can’t get enough of a truly spectacular thing!

As someone with an education and career in psychology as well as an avid interest in what makes people tick, Yeston and Kopit’s Phantom takes the proverbial cake (or cape as the case may be, wink, wink) with a story that is complex and compelling and digs deep into the personal history and the psyche of the troubled Phantom. Unless you’ve been living under a rock and just haven’t any theatre knowledge, just about everyone knows the basic premise of either version of the tale, both of which are based upon the book The Phantom of the Opera by Gaston Leroux. Erik is a disfigured man who lives beneath the Paris Opera House. While no one has seen him, most believe him to be a ghost who wreaks havoc on the Opera House. When young ingenue Christine makes her way to the Opera House, Erik is lovestruck and he’ll do anything to have her and her angelic voice.

The score and the tale are poignant, haunting, and unforgettable – but very different than the larger-than-life The Phantom of the Opera by Lloyd Webber. In Phantom, this journey delves into the mind of this troubled man who has spent his life in the catacombs and is therefore void of social refinement – as a result, murder and mayhem replace his discomfiting and unfamiliar feelings of passion and romance. But Erik stops nothing from getting in the way of his obsession with Christine – not Alain Cholet, the new Opera House manager nor his wife Carlotta, the new untalented diva. WBT delivers a Phantom that is both mesmerizing and heartbreaking with a first-rate cast, exceptional scenery that makes incredible use of its moving floors, and music and staging that are near perfection.

Kayleen Seidl as the naïve Christine Daeé is outstanding. Her heartfelt, soaring vocals will captivate you. Matthew Billman as the possessed Phantom is the perfect combination of dark yet vulnerable; disturbed as well as exposed. Like Seidl, he can hang notes in the air that create such rewarding musical frisson you’ll feel as if your goosebumps have goosebumps. Sandy Rosenberg is a superb Carlotta – she’s one you love to see get her just desserts and she adds a great touch of comic relief to a somewhat heavy production. Kilty Reidy as her husband, Cholet, is wonderful as the deceitful and detestable manager. James Van Treuren’s is fantastic as Erik’s compassionate protector, Gerard Carriere, the man who’s been carrying a heavy secret for decades. Larry Luck’s Count Philippe de Chandon is also excellent as the handsome, charming opera benefactor.

If you’ve never seen any stage version of Leroux’s The Phantom of the Opera, let this be your first. If, on the other hand you have, you must see Yeston and Kopit’s as it stands well on its own – and not as “The Other Phantom,” but as a compelling and complex exploration into the human condition. Westchester Broadway Theatre has outdone itself and it’s in a word, phenomenal.

I will pull the mask off my face and reveal who I truly am, much like The Phantom of the Opera. No, I was not always the sharp-witted, culture vulture, reviewer, quick-on-the-uptake with gossip, trivia, and a knowledge of theatre who would make any dramaturg green with envy. At one time, believe it or not, I was kid from New York who was a horror cinephile with a subscription to Famous Monsters magazine, a member of the neighborhood “Monsters, Ghouls and Ghosts” club, and saw just about every Universal and Hammer horror film ever made (including the dreadfully awful Trog starring Joan Crawford). Although it was before my time, I remember the iconic revealing of the Phantom by Lon Chaney (Senior not Junior) and even had an Aurora plastic model of him.

The above is a necessary preface to my review inasmuch as Westchester Broadway Theatre’s (WBT) Phantom is not the Andrew Lloyd Webber version. Rather, it is the highly popular Yeston and Kopit’s Phantom which missed the train to the Great White Way solely because of timing. In other words, Andrew Lloyd Webber’s version made it to Broadway because it was ready a smidge faster than the one by Yeston and Kopit and not because of any deficiencies vis-à-vis content. Indeed, while there is some overlap regarding plot points between Lloyd Webber’s The Phantom of the Opera and Yeston and Kopit’s version (both musicals were based on the novel by Gaston Leroux), there are many more differences in tone, style, staging, and even music.

I was a Westchester Broadway Theatre patron long before I was reviewer. (Yes, I remember when there were buffets and leisure suits at WBT.) Consequently, I feel justified in saying that Phantom is one of the best staged, best performed and best plays to have treaded the boards at this fine theatre.

Let’s start with the characters of the Phantom and Christine. Both Matthew Billman and Kayleen Seidl are brilliant. Apart from the fact that they have singing voices to die for, their chemistry on stage is palpable. Mr. Billman, with the help of Ms. Seidl, is able to elicit empathy on the part of the audience for the Phantom despite the fact that he is a murderer. But rather than focusing on the fact that the Phantom is a deranged, murderous, deformed monster (as many versions have done in the past), this version portrays him as a tortured soul. As a result, while we cannot condone many of the actions undertaken by the Phantom in his “mad” obsession with Christine or the Opera House, we can at least understand his motivations and how he became the person that he is.

Pillow Talking has seen Kilty Reidy in several WBT productions. As expected, he gives a wonderfully nuanced performance as Alain Cholet, the new owner of the Opera House. Complementing his comedic flare and timing is Sandy Rosenberg as Carlotta, the garishly opulent, no-talent diva. (Watching the pair on stage, I kept thinking the “Ropers” from the now vintage Three’s Company television sitcom.) Larry Luck was perfectly cast as the suave and handsome playboy, Count Philippe de Chandon, who more than held his own in the love triangle which develops between him, Christine, and the Phantom.

Another divergence from both Lloyd Webber’s version and the original novel is the relationship between the Phantom and the former Opera House manager, compassionately played by James Van Treuren. Without giving out spoilers, it is via their relationship that we discover much about Erik aka the Phantom’s background. Stuart Marland and Roger Preston Smith give equally solid performances as, respectively, Inspector Ledoux and Jean-Claude.

The direction by Tom Polum is complex, insightful, and visionary. How could it not be? If Mr. Polum could bring Troma’s no-budget flick The Toxic Avenger to Off-Broadway, then he is capable of pulling off anything.

Finally, kudos must go to Musical Director Bob Bray as well as a tight book by Arthur Kopit and thrilling music and lyrics by Maury Yeston. In many ways, Phantom is more operetta-like than Lloyd Webber’s stage version and somewhat closer to the screen adaptation that featured a veritable unknown at the time – Gerard Butler – and a very young Emmy Rossum.

Yeston himself is claimed to have said that his Phantom “is the greatest hit never to be produced on Broadway,” yet is credited with 1,000-plus productions regionally. All I can say is that whether you’re a Phantom-phile or not, this play needs to be experienced!