Pillow Talking’s Review of THE OTHER PLACE 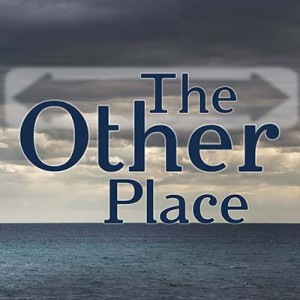 If you cannot find peace within yourself, you will never find it anywhere else. – Marvin Gaye

The Other Place is a taut, psychological drama written by Sharr White that premiered on Broadway in 2013. Elmwood Playhouse’s production of The Other Place is simply stunning both visually and emotionally. Director Michael Edan has succeeded in creating a Hitchcockian foray into the human psyche and familial relationships with poignant alacrity that will touch your innermost emotions. Indeed, you’d better be prepared to have a tissue with you – just in case.

It’s hard, if not impossible, to talk about plot without giving away major spoilers. Suffice it to say that the play revolves around a brilliant fifty-two year-old scientist, Juliana, her husband, and daughter. It opens with Juliana giving a speech at a medical convention. It soon devolves into a collage of past and present scenes each tinged with vital exposition and, like a complex jigsaw puzzle, the scenes eventually meld together into a searing denouement. Much like the film Black Swan, reality and illusion clash head-on and the audience is cast in the role of both voyeur and detective. 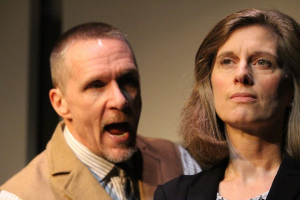 The small but highly talented cast is pitch perfect. Emma Laurence was mesmerizing as Juliana, a part which required her to be on stage the entire play. She brought her formidable acting jobs to bear on the role as she seamlessly vacillated between past and present all the while remaining in character. The on-stage fusillade of emotional changes between different periods was accomplished seemingly effortlessly by Ms. Laurence. Veteran stage actor and graduate of the American Academy of Dramatic Arts Daniel Charest was wonderful as Juliana’s husband and physician. He had an easy way about him that oozed a supportive and calming bedside manner totally appropriate for his character. I would definitely want him as my physician. Rounding out the cast was Anne Marie Goulding who did a splendid, heartwarming job as The Woman; and Stavros Adamides who did an equally stellar job as The Man.

The Other Place is an intensely layered piece. I was reminded of Robert Redford’s directorial masterpiece, Ordinary People, where we see what appears to be a normal, well-adjusted family on the surface, but as time goes on, like Shrek’s onion analogy, the layers are peeled back and we see what dark secrets are just below the surface waiting to explode. “The Other Place” in the story is a Cape Cod cottage where Juliana hopes to find certain answers to the problems and situations in her life. Metaphorically, of course, The Other Place Represents a kind of safe harbor or nirvana where we may not only find a respite for a while but real, lasting peace. The true essence of the play is captured in Mr. Edan’s Director’s Note –

And while the specifics of our stories may differ, we are still bound in the human dilemma of sometimes being lost, desperately seeking some kind of solace or anchor while feeling we are adrift on a vast, dark ocean without the assistance of stars to navigate us toward something called home….Perhaps that ‘other place’ resides somewhere that words cannot easily access, in the deep, ineffable mystery of being alive.

Special nods go to Rob Ward for his masterful set design and Tim Reid for his carefully nuanced lighting design which really underscored the events taking place on the boards.

This play is about so many things. It’s about life, love, loss, grief, illness, caregiving, and, ultimately, hope. See Elmwood’s The Other Place before it disappears like Brigadoon.

I’ve often acknowledged that while I love all kinds of theatre, my passions are works that explore relationships and psychology, and into which may be woven varied other creative and intelligent themes. I’m also a huge fan of playwrights who dare to take unique, even somewhat circuitous routes to storytelling. I want to be entertained, but I also want to think and I want to feel; I want something to stay with me long after I’ve exited the theatre – in fact, I hope to still be gnawing on a piece the next day or even days later. Sharr White’s The Other Place at Elmwood Playhouse is that dynamic, heady sort of production.

What’s more, the play’s protagonist, the redoubtable, accomplished Juliana Smithton, a pharmaceuticals scientist who seems to have it all, is a complex and tremendously layered character. We are introduced to her from the moment the play opens as she delivers a speech at a conference in St. Thomas about a new drug her company has developed for dementia. Juliana is a brilliant, confident orator who adeptly commands the room of (mostly) men in suits. Until she doesn’t…

Something. Has. Gone. Wrong.

Something plagues Juliana. And that something attaches itself to your psyche and holds on for the entire 75-plus minutes, while Juliana herself remains ever-present, never setting foot off the stage, with life continuing to happen all around her. 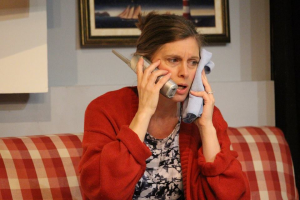 For most of the taut, fast-paced, single-act work, we learn through flashbacks and frozen moments that Juliana’s world may not be what it seems. Does she have it all, or is everything crumbling at her feet? What is reality? Or more accurately, what is Juliana’s reality? She accuses her husband of cheating on her and then tells her doctor he’s divorcing her – but is he? Is she paranoid? Many years earlier, the couple’s 15-year-old daughter disappeared with one of Juliana’s research assistants but now mother and daughter are communicating again – or are they? And their cherished vacation home on Cape Cod, the other place, serves as a repository for wonderful family memories – but does it still? Were they all wonderful? Does it even exist?

Sharr White tells a beautiful and often heartbreaking story about love, life, and loss. Further, it questions the idea of identity – are we simply a collection of all of our life experiences? Those real, tangible events that make up our personal history? But what happens when something goes awry? When our mind is fragmented, distorted, broken? Who are we? What will we become? How do others navigate these minefields with us and around us?

Through masterful direction by Michael Edan, The Other Place is intoxicatingly potent and often unsettling. Edan assembled an exceptional cast who embody their roles with tremendous authenticity. Emma Laurence is brilliant as Juliana, who’s got both a razor sharp tongue and wit; she’s clearly the type of determined, uncompromising career woman many would refer to as a bitch – but she’s got a heart and for reasons that continue to surface throughout her haunting performance, it is a heart that is torn to shreds (as yours will be). Daniel Charest as Juliana’s husband, Ian, is fantastic. He’s alternatingly patient and puzzled, frustrated and furious. As his wife continues to have “episodes” he’s both her advocate and her guide in helping her to determine their root, but one may wonder why he doesn’t turn tail and run.

In the supporting role of “The Woman,” Anne Marie Goulding (whom we saw as a terrific Nurse Kelly in Elmwood’s Harvey) captured each of the three characters she portrays – she’s Juliana’s doctor, Dr. Cindy Teller (with whom Ian may or may not be having an affair); the couple’s estranged daughter, Laurel; and a distraught woman into whose life Juliana intrudes while bumbling about on her unstable journey. Stavros Adamides is great as “The Man” – playing both Richard Sillner, the research assistant with whom Laurel has disappeared, and a nurse. 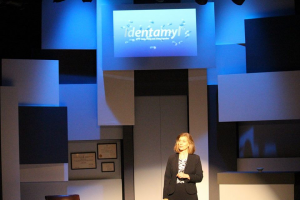 In addition to the stellar acting and direction, there are many other elements which make this compelling drama work – the scenic design by Rob Ward was spot-on. A piecey set which moves seamlessly into place not only takes us from St. Thomas to Juliana’s home to her daughter’s home to the hospital to the other place and finally to St. Croix, but the almost disjointed backdrop mirrors the fragmenting divide of Juliana’s mind. Lighting by Tim Reid, video by William Cusick, and sound by Larry Wilbur also perfectly evoke the feeling, time, and place. Kudos also to Janet Fenton as costume designer (Juliana’s sharp suits also complement her sharp demeanor), John Gray as technical director, Allison Schneider as production stage manager, and Kathy Gnazzo as producer.

In the director’s note, Edan talks of individual human stories – and how we all are at times lost and adrift, yet we must continue to be present even through painful and terrifying unknowns. The Other Place speaks to this, but also to those times when for unfathomable reasons we cannot be present – when dark impasses impede our journey. Life, like the mind, is a mystery. But I highly recommend you find a way to navigate to The Other Place at Elmwood Playhouse before it exists no longer.