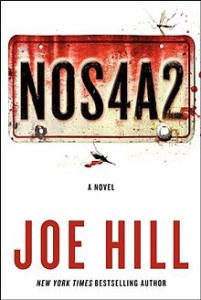 For the longest time I resisted the gnawing at my rotten and decaying insides to read Joe Hill’s NOS4A2. And why shouldn’t I? He stole my shorthand nomenclature and used it as a title for his book. (My email is IMNOS4A@gmail.com – keep those messages, memes, and death threats coming!) I was thinking that maybe I should sue, but of course I realized later that the book came out before my email was created – so sue me, I was unique but not original. But still! How dare he usurp my unique identity?!

I’d first learned of Joe Hill after he wrote the novel Horns. I didn’t read it but had heard that it was my kind of sick horror.  When I saw the movie version I only was mildly impressed – I thought it fell apart at the end (but that’s for another review). So I chose then to put anything Joe Hill back on the shelf with the other things that I would maybe/someday/never get to – or else in another lifetime.

And then – news flash! I heard that Joe Hill was Stephen King’s son! At that point, I had no choice but to see how far the apple fell from the tree. (Or, to put it in chess terms, how close is the novice to the Grandmaster?) I may not like every single thing that Stephen King has written, but there is no doubt that he is a supreme master storyteller and many of his horror tales have reached iconic and truly Jasonian proportions – Carrie, Salem’s Lot, Misery, and The Shining just to name a few.

The next thing I knew I was cracking open NOS4A2 with the sole intent of seeing just how well-written (or not) the opening chapter might be. I really wanted it to suck big time. How much talent can come out of one family? Remember, Tabitha King (Joe’s mother) is a novelist in her own right. Please suck, please suck, please suck was my evil mantra until I hit page two.

Like the proverbial fly caught in the spider’s web, I was a goner – zombified – as if I had been given zombie powder laced with tetrodotoxin – and I was at once enslaved as a Joe Hill worshipper.

Excellent horror writing, to put it simply, is great literature with horrific and/or supernatural themes and elements. The green-eyed monster rages within me as I admit that NOS4A2 was a sick read (I wish I had written it), rising to the level of a Jasonian epic. So the apple doesn’t fall far from the tree – if it falls at all. Indeed, if I were doing the Coke/Pepsi taste challenge and adapting it to the King family, I would be hard pressed to say who wrote what given an anonymous piece of writing by each. Yes, Joe Hill is that good. He has inherited the storytelling writing gene from his mom and his dad. And like his father, Hill tends to be verbose, as if he, like Charles Dickens, was getting paid for the word rather the finished product (The Stand was just too long – let’s admit it). Hill slow builds suspense one stiletto stab at a time just like Stephen the Great. There is the same type of artful character development and major arcs of the main protagonists. Pop culture references also abound in Joe Hill’s work. The sickest similarities, however, are the doppelganger-like writing styles and thematic elements. I wish I had an ounce of blood for every time I thought of King’s haunted car, Christine, while devouring NOS4A2 with its haunted 1938 Rolls-Royce Wraith.

Of course, if I were on the guillotine about to be beheaded, I’m sure I could conjure up some legitimate differences to save my neck. For one thing, Hill tends to be cruder and more graphic than his dear old dad – probably a generational thing. He also pushes the envelope more with story elements which, in turns, stretches verisimilitude and the credibility of the story into maximum overdrive (no pun intended).

On the surface, NOS4A2, like Christine, is about a haunted car. But like all Stephen King novels, NOS4A2 is populated with subplots, quirky characters, topical references and twists and turns, some predictable; some not. The main protagonists have the power to create constructs – places and things in their minds – which can then intersect with reality. As Hill explains in one expositive section, it’s much like a musician who hears music in his mind and then creates it in our world. These special people need the help of some haunted object to facilitate their power – whether it be a 1938 Rolls Royce Wraith, a Triumph motorcycle or a simple Scrabble game.

The evil Charles Talent Manx collects young tweens, takes them in his Rolls Royce to a dreamscape (or rather nightmare-scape hes’ mentally created) called Christmasland. – but Christmasland is more like a holiday in Tim Burton’s The Nightmare Before Christmas than Tim Allen’s in The  Santa Clause. The tweens are robbed of their youth and become permanent fixtures in his perverted, bizarro world where Christmasland is just a synonym for Hell with amusement rides like the Sleighcoaster and kiddie games like scissors-for-the-drifter are the main attractions. Victoria “Vic” McQueen is the only child in history who’s ever escaped from Christmasland and is instrumental in bringing Manx to justice. But as we’ve seen in Harry Potter and Star Wars sequels ad nauseum, evil like Lord Voldemort or Darth Vader can never truly be vanquished. Charlie Manx manages to escape both prison and death and is now Hell-bent on getting revenge.

What follows is the typical algorithmic, archetypical structure – Good (personified by Vic McQueen) vs. Evil (embodied by the Wraith and Charlie Manx) with Innocence in between (represented by Victoria’s precocious son Wayne).

All in all, despite the fact that Hill stole my moniker, NOS4A2 is a sick, Rippersmooth read that horror aficionados will greedily suck dry like the book’s namesake, Murnau’s Nosferatu. You don’t have to be a Joe Hill or a Stephen King fan to like it – but it certainly couldn’t hurt.