Pillow Talking’s Review of THE KING AND I 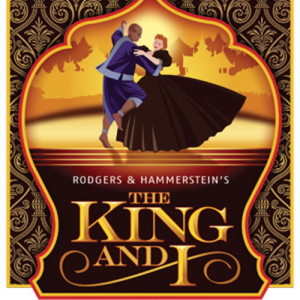 If there is one theatrical production about which I have heard more than almost any other, it is Rodgers & Hammerstein’s The King and I, the origins of which go back to my early childhood. As the offspring of former professional dancers, my parents often regaled us with the many stories about their time performing, including having been in this iconic musical during 1960s summer stock theatre with actor J. D. Cannon. (My mother also danced with the famed American Ballet Theater and my father with National Tours; both were at the New York World’s Fair, and at different times worked with countless notables such as Liza Minelli, Chita Rivera, and Morgan Freeman, among others.) And it was from their experiences with The King and I that our family also gained some wonderful lifelong friends. But there’s an odd element to this tale – I’ve never seen a production of The King and I. That is, until recently.

So it was with excitement and anticipation that I had the good fortune to attend an utterly resplendent performance at The Bushnell Center for the Performing Arts – and now that has become an indelible memory against which I will measure all future experiences.

When English widow and schoolteacher Anna Leonowens (Laura Michelle Kelly) and her young son Louis (Graham Montgomery) sail to Siam, they are dismayed to learn that the King and her employer (Jose Llana) doesn’t intend to adhere to all of the agreed-upon terms of Anna’s service. The King’s prime minister, the Kralahome (Brian Rivera) escorts her to the palace where she voices her dismay. Unused to being questioned, the King is frustrated by Anna’s persistence; yet despite her consternation, she begins tutoring the King’s children and their mothers. The King has many wives, the most notable of whom are his head wife, Lady Thiang (Joan Almedilla) and his newest, Tuptim (Manna Nichols), who was a “gift” from the King of Burma.

But not having her own house is but one of the issues plaguing Anna and the King – the crown prince Chulalongkorn (Anthony Chan) is impossible; Tuptim has no desire to be part of the King’s collection and is in love with a young man named Lun Tha (Kavin Panmeechaq); the West deems the King a barbarian; and Anna and the King have, well, a thing for each other. 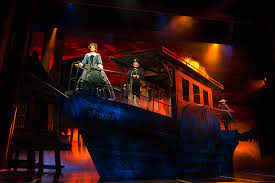 As the show opened, if the audible gasps around me indicated anything, it was that the full effect of the moving ship in the opening scene struck awe among audience members. With an incredible cast, magnificent costumes (by Catherine Zuber), and even more stunning set pieces (kudos to Michael Yeargan), the story of Anna and the King of Siam (the actual title of the original novel by Margaret Landon upon which the musical is based) unfolds in truly grand fashion. Expertly directed by Bartlett Sher, this incarnation gave me chills and I found myself grinning straight through to the final curtain (punctuated by a few tears as well).

As Anna, Kelly’s voice is impeccable and one wonders how she is able to glide so effortlessly across the stage in her luminous, albeit voluminous dresses. She is the soft, graceful, poised, yet strong-willed complement to Llana’s King – the imposing and unyielding leader to his people who wishes to find some balance between East and West, tradition and modernization. Llana offsets his commanding and forceful presence with his often unexpected sense of humor.

Almedilla is a wise and dignified Lady Thiang and Rivera’s excellent portrayal of the Kralahome is as strong, protective, faithful advisor and servant to his King and to his culture. The determined Tuptim played with entrancing urgency by Nichols is a delight as one half of the star-crossed pair; and her chemistry with Panmeechao as the impulsive and imprudent Lun Tha is palpable. Chan’s Chulalongkorn has the perfect amount of arrogance and vulnerability as one might expect of a youthful heir. Montgomery is charming as the wide-eyed Louis. Sir Edward Ramsey is the British diplomat who comes to assess the King’s purported barbarism and is played by Baylen Thomas (who also plays Captain Orton); he’s perfectly dignified and still warms to Anna as they reunite in Siam.

The entire majesty of this production works because of the acting, singing, direction, choreography (Christopher Gattelli, based on original choreography by Jerome Robbins), and staging, but also because of powerful other elements such as lighting (Donald Holder), sound (Scott Leher), wig and hair design (Tom Watson), orchestrations (Robert Russell Bennett), music coordination (David Lai), musical conduction (Gerald Steichen), and dance & incidental music arrangements (Trude Rittmann), as well as the many other hands that went into its mounting.

A powerful production such as this is always timely, bringing to the forefront the varied issues of cultural diversity, racism, sexism, acceptance, love, and family which are woven throughout like the stunning threads of both the Eastern and Western garments worn by its characters. Striving to keep one’s identity amid pressure to change and showing respect to others is key to all of the characters. The King and I captivates not only in its large-scale splendor, but also in its universal messages. If it’s not already on or been checked off your bucket list, it should be. It’s finally been checked off of mine.

Growing up in the sixties and seventies as a film and theatre buff, there was only one King of Siam and his name was Yul Brynner. I will never forget his commanding presence even on celluloid in The King and I, with those piercing eyes and that booming voice. Seeing rough community theatre productions of it over the years only confirmed that Yul Brynner was truly the one and only King (just like Edmund Gwenn, for me, will be the one and only Santa Claus in the 1947 Miracle on 3th Street, but I digress). As I grew older (and my memory dimmer), I began to see that the world is full of talented actors who may be able to at least hold a candlestick to Mr. Brynner. I was lucky enough to marry into a show biz family where both my father-in-law and mother-in-law toured with a summer stock company back in the sixties and often regale me with stories of how great J.D. Cannon was as the King. For those of you who did not, like me, eat, drink and watch hours and hours of television, J.D. Cannon played Dennis Weaver’s boss on the seventies TV Show McCloud. I was like, No way could he be the King of Siam! (He played a good detective, but the King?) But they tell me he was great! And then when Pillow Talking had the opportunity to interview Lou Diamond Phillips last year, we discovered that he has 600-plus performances to his credit as the King and holds the record for most performances among living actors (Yul Brynner played the role in over 4,000 performances!) I could see Phillips as the King. So I began to think Yul Brynner’s crown might be up for grabs. Of course, the part of the King has always been a pivotal one – if he is weak, then the show is weak.

I am happy to report that the National Tour of The King and I at the Bushnell was simply fantastic. The King, played by Jose Llana, oozed strength. Like Mr. Brynner, he had a commanding presence that was palpable. Indeed, you could feel his strength – I’m sure even in the nosebleed seats. But it wasn’t just his on-stage strength of character that was hypnotizing, Llana brought a special charm and sensitivity to the character which contributed to his overall charisma. 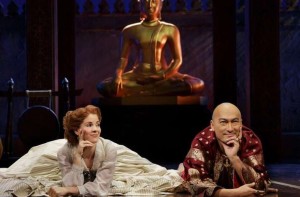 The King and I is about the King of Siam who hires an English tutor for his many wives and children so he will be better thought of by his contemporaries, like President Lincoln. Of course, sparks fly when East meets West and culture shock abounds. The King is obviously not used to the modern English woman who feels that women are just as important and equal to men. There is a nice Romeo-and-Juliet type of subplot that underscores and facilitates the clash of cultures and customs. Certainly, W.C. Fields who once said, “Never work with animals or children,” would have refused the role of the King inasmuch as there are so many young children in the cast. In fact, this show is one of the most difficult to pull off simply because of the number of children needed in the show. 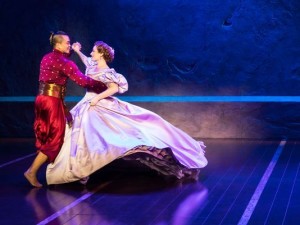 The National Tour, however, pulled it off with an incredibly talented cast including many youngsters.  Laura Michelle Kelly was wonderful as Anna. She held her own both as a character and as an actress with Llana. The young Romeo and Juliet couple played respectively by Kavin Panmeechao as Lun Tha and Manna Nichols as Tuptim, served as a nice counterpoint (as well as foil) to the growing relationship between the King and Anna. While the entire cast and ensemble are too large to name individually, shout outs must go to Joan Almedilla as Lady Thiang, the King’s principal wife; Brian Rivera as the Kralahome, the King’s advisor; Anthony Chan as Prince Chulalongkorn, the heir to the throne; Graham Montgomery as Anna’s son Louis; Baylen Thomas as Captain Orton/Sir Edward Ramsey; Darren Lee as Phra Alack; and Rylie Sickles as Princess Ying Yaowalak; as well as the rest of the company including the Royal Court Dancers, Fan Dancers, Royal Wives, Townspeople, Guards, Monks, Royal Children, and Ballet Dancers.

Scenic design is so important and sometimes we (even as reviewers) take it for granted and think of it as an afterthought at best. Let me correct this faux pas and state that the scenic design is as much a part of the show as the flesh-and-blood actors. The ship that brings Anna to the mainland of Siam was staggeringly beautiful both in detail and functionality. (I was so impressed by the ship that I kept wondering for the rest of the evening how they would assemble and disassemble it and then transport it for their five-day tour runs.) Kudos also must go to the giant statute of Buddha which appeared a few times throughout the play.

Of course, as one would expect from a National Tour, the music, singing, and choreography was Broadway caliber.

The King and I is as relevant today as it was when it was first produced way back when in terms of inclusion, accepting others’ beliefs and customs and, ultimately, how to co-exist in our very diverse world. It is a family-friendly show that has lessons for all of us. Indeed, I learned for once and for all that the King of Siam can be capably played by actors other than Yul Brynner!