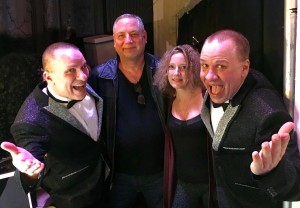 Pillow Talking’s Stephanie and Wayne with the Edwards Twins

I’ll admit it – I get a little bit crazy when I meet celebrities. Not over-the-top, all-out-ridiculous, fall-all-over-them, fanatical kind of crazy; but privately, on the inside, the heart beats fast, I get weak in the knees, and yeah, I swoon. And that’s just when I meet one. So imagine what might happen if I had the opportunity to meet multiple superstars at the same time…I’d just about stroke out.

Recently I encountered that level of thrill at Danbury, CT’s Palace Theatre – the ecstasy of celebrity in excess. Celebrity in the personages of Bette Midler, Neil Diamond, Cher, Sonny Bono, Barbra Streisand, and Andrea Bocelli. But it wasn’t what it might have seemed. In truth it was not six, but actually only two stars – two unabashedly and exceptionally gifted brothers who transform themselves into myriad of the most talented performers of our time – it was The Edwards Twins in their dynamic show “Christmas with the Stars.”

Anthony and Eddie Edwards are masters of impersonation – something at which they’ve worked passionately since they were school kids exploring their backyard “playground” outside of the TV studios in Burbank, California. They watched stars such as Carol Burnett, Tim Conway, and Sonny & Cher going in and out of the studios and began their mimicry as young boys, entertaining friends and family. As they matured, they honed their craft; but they aren’t just breathing versions of a Madame Tussauds creation — they don’t only look like other celebrities – they sound like them and they act like them. Taking their time to study, practice, and downright nail the voices, gestures, mannerisms, and even the subtlest nuances of each of the personalities they impersonate; it is as if Anthony and Eddie become each one of them as they were in their prime. Then they nostalgically transport their audiences back in time, skillfully recreating some of the most spectacular moments in entertainment history. 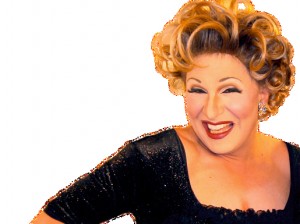 And there I was – a part of it all. Eddie, whose voice is a bit higher, fashions himself into the female personalities, and Anthony into the male. In front of the glitzy, tinsel-laden curtain, the night started out with a flirtatious, kiss-blowing, red-headed Bette Midler sauntering onto the stage and singing her classic “From a Distance” before eventually bringing a bit of Christmas fun to the evening. Neil Diamond followed with the one and only “(Coming to) America,” several Christmas favorites such as “Jingle Bell Rock” and many more of his classics including “Forever in Blue Jeans” and “Sweet Caroline.”

It’s amazing to think that these two men, in record time, not only can change makeup, wigs, prosthetics, and 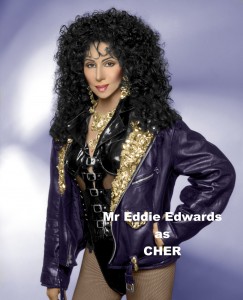 costumes, but also morph their own vocal chords to sound like over 100 different stars – but they do and they nail it every time. Eddie returned in a swinging dress of silver icicles and a monster head of black curls as Cher belting out “Winter Wonderland” in her iconic contralto voice, then eventually singing a parody of “Blue Christmas” with lyrics such as “…now that you’re a boy…” “…facial hair makes you look funny…” “…voice sounds like Sonny…” and “…decking the halls with new Christmas balls…” It was an amusing but well-meaning shout out to Cher’s son Chaz Bono (formerly Chastity, born female) whose gender reassignment was the fodder for many tabloids back in the early 2000s. Cher finally was joined by the late Sonny Bono; the duo performed several songs together including “Jingle Bells” and their unforgettable, “I Got You, Babe.”

While I, and I’m sure the audience, waited to see who’d come on next, Anthony entered the stage simply as himself. 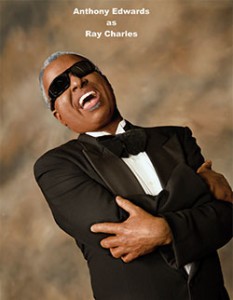 With little more than a prop here or there, he wowed with his transformational singing prowess as he brought us Rod Stewart with “The Christmas Song (Chestnuts Roasting on an Open Fire)”; Perry Como with “It’s Beginning to Look a Lot Like Christmas”; the Bee Gees’ classic “Stayin’ Alive”; Andy Williams and Johnny Mathis with “It’s the Most Wonderful Time of the Year.” Then donning a braided wig, he became Stevie Wonder with “Part Time Lover”; followed by Burl “Mr. Christmas” Ives crooning “Holly Jolly Christmas.” And for our amusement, Dean Martin barely knew into which to sing – the microphone or the martini glass with “Let It Snow”; then Ray Charles gave us “Rudolph.” Mr. Blue Suede Shoes himself (Elvis) brought the house down with “Blue Christmas.” We even had the pleasure of everyone’s favorite amphibian, Kermit the Frog, singing “Merry Little Christmas” before the frenetic Tom Jones ended the run with “I Saw Mommy Kissing Santa Claus.”

A night of impersonation wouldn’t be complete without a visit from Barbra (Streisand) – and again, Eddie mastered 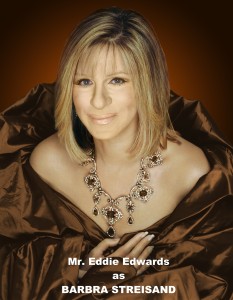 her. Classics like “Evergreen,” “Enough Is Enough,” and “Rain on My Parade” were interspersed with Christmas tunes. Anthony’s Andrea Bocelli joined her with “A Time for Us” and he continued on his own with “Oh, Holy Night” while Eddie prepared a wonderful surprise: an original song written for him (which he tweaked) as a tribute to his relationship with his father.

Eddie emerged in a blonde wig and a blue dress, sat at his vanity, then unmasked – all the while as he sang about what it was like to have his father discover his predilection for dressing in “drag” and his yearning for his father’s approval. It was full of emotion and wonderfully moving.

Anthony and Eddie Edwards, these “copy cats” as they’ve referred to themselves, provided us with a truly amazing evening – and to top it off, they are incredibly gracious, humble, and exceptionally appreciative of their fans – even thanking some unknown benefactors for picking up their check at a diner the last time they were in town (the woman behind me screeched, “That was us!”) When we had the fortunate opportunity to sneak backstage for a quick hello and a hug, Wayne and I were blown away at seeing their makeshift “dressing room” set up in the narrow space behind the curtain. What these two unmatchable talents are able to execute is nothing short of remarkable. No two shows are ever the same they say…so we plan to return again and again and again…

Mark Twain once said that the difference between the “right” word and the “almost right” word was the difference between “lightning” and “lighting bug.” The same range of difference exists between entertainers who do “impressions” and those who do “impersonations.” One can do an impression of someone by trying to capture facial gestures, mannerisms, voice.  But entertainers who “impersonate” literally counterfeit the subject, using prosthetics, wigs, costumes, etc. Impersonation is total mimicry.

I grew up watching some great “impressionists.” Frank Gorshin (better known as The Riddler from the 60’s Batman TV Series), Rich Little, Robin Williams, and Jim Carrey have been just some of the entertainers I have enjoyed. But I had never seen actual entertainers who “impersonate” until my wife and I saw the Edwards Twins.  All I can say is – REMARKABLE, ENTERTAINING, ENTHRALLING! 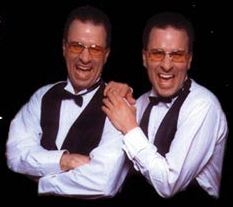 The Edwards Twins (whom we had the pleasure of interviewing on our Pillow Talk blog) were simply amazing. Anthony Edwards specializes in men; his twin brother, Eddie, specializes in women. Together, they are fantastic.

The twins performed in front of a shiny, holiday decorated curtain. We were lucky enough to go backstage after the show and to our utter amazement, there were two dressing tables directly behind the curtain. The twins apply all of the make-up, wigs, and prosthetics themselves – and in record time.  They don’t just perform in the show, they are the show. 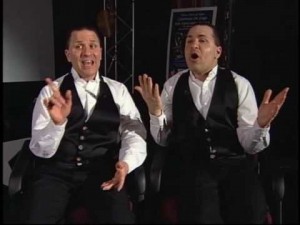 show. Consequently, they never do the same show twice. We attended their holiday show which featured six celebrities: Sonny and Cher, Neil Diamond, Andrea Bocelli, Barbra Streisand, and Bette Midler. Each “impersonation” was spot-on; looks, singing voices, and mannerisms. Remember the old Memorex commercials where Ella Fitzgerald would sing and shatter glass and then they would play her voice back again on Memorex and a new glass would shatter? The tag line was, “Is it live or is it Memorex?” The tag line for the Edwards show could be, “Are they really imposters or did the celebrities actually show up to surprise the audience?” The impersonations were flawless.

While I thoroughly enjoyed each and every impersonation, the act that got to me most and gave me goose bumps was Eddie’s last impersonation. He came out liveried as an unidentified attractive female singer. It was announced that he was going to do an original song written specially for him titled, “What Makes a Man” –  a song about a son’s quest for his father’s love and approval. Throughout the song, Eddie metamorphosed (by shedding wig, dress, make-up, etc.) before our eyes into himself. It truly was an effective and touching piece.

The Edwards twins are true entertainers who aim to please. They packed the house and received them a well-deserved standing ovation. You really have to see them to believe them.