Pillow talking’s Review of TAKE ME OUT 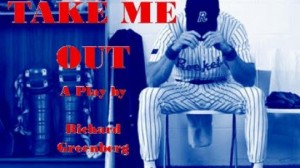 In the wake of the recently passed House Bill 2 (HB2), with positively everyone having something or other to say about who should and shouldn’t be allowed in what intimate spaces, Richard Greenberg’s Take Me Out couldn’t be more relevant and timely. Often termed the “gay baseball play,” the 2002 Tony Award-winning work brings to light themes centering on homosexuality, homophobia, masculinity, racism, class, and celebrity, and ultimately ventures into some pretty dark and unexpected places. 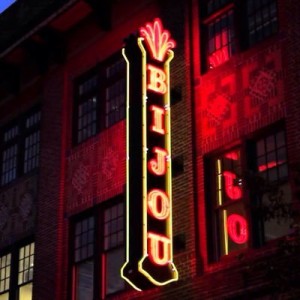 This uniquely socially- and politically-sensitive work was skillfully directed by Richard Mancini and bravely staged (explanation to follow!) at The Bijou Theatre, the cabaret-style gem in the heart of Bridgeport. The Bijou is run by Executive Producer Christine Brown and Artistic Director Tony Stimac and the provocative production was produced by husband-and-wife team John R. Smith, Jr. and Tanya Feduik-Smith. With a cast of all men, there was a great deal of exposure – locker-room style. Most of the cast at one point or another appeared completely in the buff – which could have been shocking or off-putting (it wasn’t) if not for the fact that it was a very necessary device to drive home the play’s chief point – how do testosterone-driven, over-masculinized males in sports feel about sharing America’s favorite pastime (as well as the locker room) with – gah! – a gay man?

That gay man is Darren Lemming, a biracial, top-of-his-game centerfielder with the fictional team the Empires. That gay man who, up until his coming out, was friend, co-player, idol, and all-around-beloved guy, perfectly welcome to share the space and the shower with the rest of the team. That gay man who didn’t change at all – the only thing that changed was others’ perception of him.

The play opens after the whole mess started – and unfolds in flashbacks narrated by the fourth wall-breaking shortstop “Kippy” Sunderstrom, “the most intelligent man in Major League baseball,” played to articulate perfection by Christopher Finch. Mildly miffed that Lemming didn’t tell him before the illustrious press conference, he doesn’t let it stop him from helping his best friend/teammate navigate the backlash through some deep and philosophical conversations. Lemming, authentically played by Ainsley Andrade, is equal parts ego, detachment, acerbity, and internal tumult. You believe his every word, you feel his anguish, and you root for all of the “teams” on which he plays.

In addition to Kippy, Lemming’s best friend outside of the Empires is Davey Battle, the star player on a rival team. Battle is played by an excellent Brian Alvarado and it is he, who through his proselytizing discourses, encourages Lemming to be his true self. He is a married, religious man who believes in the power of threes. Lemming also is supported by team manager Skipper, played skillfully by Tom Torpey (we loved Torpey as Martini in The Bijou’s recent One Flew Over The Cuckoo’s Nest). 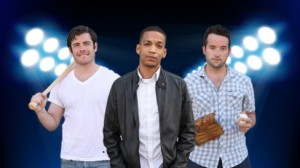 Another wonderful Cuckoo’s Nest vet, Geoffrey Gilbert, was flawless as Mason Marzac, the green, newly-appointed business manager to Lemming. Also gay, Marzac initially knows nothing about baseball, but becomes an exceptionally enthusiastic devotee. And the major foil to Lemming’s plan is the dim but antagonistic redneck, Shane Mungitt, played superbly by Mike L’Altrella. Mid-play, Shane’s horrific childhood is exposed, yet it doesn’t excuse his derogatory, foul-tongued slurs and aggressive behaviors which create most of the injurious ripples in the media as well as the Empires’ solidarity.

The rest of the cast were equally phenomenal. The grumbling team members are as follows: Tim Brandt as the overly obnoxious and homophobic Toddy Koovitz; Qesar Veliu as the newbie, at-times humorously effeminate Jason Chenier; Juan Ayala as Martinez and Enrique Rivera as Rodriguez, the non-English-speaking, seemingly inseparable twosome; and JiMin Moon as the Japanese, somewhat mysterious, seventh-inning bungler Kawabata. Each added important elements and can I say this without a groan? They all hit it out of the park – really.

Many often wonder about the oft-referenced “butterfly effect” – does it exist? What perturbations may cause it? Where will it lead? Take Me Out takes some startling twists and turns and ultimately leaves audiences a bit unsettled. We can’t help but wonder why the whole mess ended as it did.

Shout outs also must go to Assistant Director Cindy Hartog, Stage Manager Maig Smith (daughter of co-producers), light, sound, and set design by Feduik-Smith, and set construction by the Smith trio. Light on set, the locker room, replete with showers, moveable pieces to create the feel of the ballfield/dugout were appropriate for this unique black box.

My advice? Catch Take Me Out – it is thought-provoking and relevant. It shows both the bright and dark sides of social acceptance. And no matter what, it is all around good theatre!

Take Me Out. A verb, pronoun, and adverb. One of the main definitions of out is a direction away from the center or middle. Three words which, when put together, can mean a plethora of things including: take me out of a situation; take me out on a date; take me out as in kill; take me out of the closet; take me out to the ballgame. Or, it can mean The Bijou’s production of Richard Greenberg’s Tony Award-winning Take Me Out, a play which encompasses all of the aforementioned.

Take Me Out premiered on Broadway in 2002. At the time, the theme of the play – a male sports figure coming out of the closet publicly — was ripped from the headlines (I’ve always wanted to use that). Although today, the general public may be less sensitive to gay sports figures, the principal themes of the play – racism, gay bashing, bullying, media-hype – are still very much relevant to today, maybe even more so now than 15 years ago. Massive kudos must be given to Artistic Director, Tony Stimac, Christine Brown, Executive Producer and the play’s producers Tanya Feduik-Smith and John R. Smith, Jr. for bringing this mature play to our community. Tanya did such a great job directing One Flew Over The Cuckoo’s Nest, I was really excited to see how she would do wearing a different hat. I am happy to report that both Tanya and John made what I know is a tough play to produce look like child’s play. 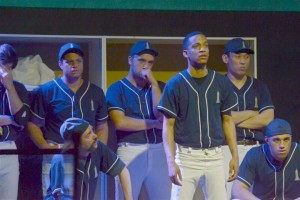 Act one sets up the basic story and characters. Most of the exposition is given by one of the players, Kippy Sunderstrum and by Mason Marzac, a financial advisor to the star player, Darren Lemming, who decides to publicly come out. It is done in such a way that is engaging and humorous; no heine itch thankfully! And then Act two comes in like a steamroller and flattens you with its forcefulness and power. It’s so hard giving any plot points in Act two that would not act as spoilers. Suffice it to say, don’t blink and don’t go to the bathroom.

Veteran forty-year director Richard Mancini put together a gifted cast and staged a great piece of theatre. His staging and blocking was spot on – in more ways than one, as the necessary nudity was handled with taste and subtlety. 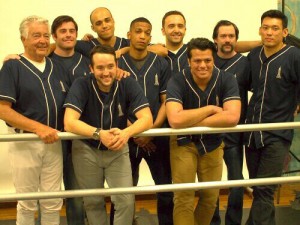 The cast, several of which were in Cuckoo’s Nest, acted as a true team. Ainsley Andrade hit just the right tone as the lead baseball player who decides to announce he’s gay. Geoffrey Gilbert, who was so good as the rough and tumble RP McMurphy in Cuckoo’s Nest, does a 180 here playing Ainsley’s somewhat awkward but at all times endearing financial advisor (who also happens to be gay). Skipper is adeptly played by veteran actor, Tom Torpey (talk about 180s, his stand-out performance in Cuckoo’s Nest and his vastly different portrayal here showcases his incredible range). Although JiMin Moon as the Japanese player had very few lines since his character did not speak English, he nevertheless had great stage presence (a special shout out must go to him since he is not Japanese, but Korean, and had to learn several lines in Japanese). The character Davey Battle who was Darren Lemming’s best friend was very capably played by Brian Alvarado as is the character Toddy Koovitz by Tim Brandt. Qesar Veliu has good comic timing as Jason Chenier, as the possibly gay newbie on the team. The ensemble is rounded out by Enrique Rivera as Rodriguez and Juan Ayala as Martinez. They do a great Spanish-speaking sequence together.

It’s hard to single out any one actor since the strength of an ensemble cast is that they work together as a whole, or in this case as a team, with no star players. That being said, special shout outs must nevertheless go to Chris Finch as Kippy and Mike L’Altrella as Shane Mungitt. Chris did double duty as one of the player’s and Darren’s best friend on the team, and the narrator of the story. As the narrator, he would often break the fourth wall and speak to the audience. His oratory skills are considerable and will serve him well in his real life pursuit of a law degree (are you sure you want to b an attorney? It’s not too late. As an attorney myself I can ask those questions!). As for Mike L’Altrella, he hit a home run as the rather dimwitted, hillbilly, and much maligned Shane Mungitt. Watching his performance, I was reminded of a young Scott Wilson in Truman Capote’s In Cold Blood.

It is rare indeed for artistic directors, theatres, and producers to bring such a daring play to community theatre. When it does happen, as in this case, you should have someone Take You Out to see it!