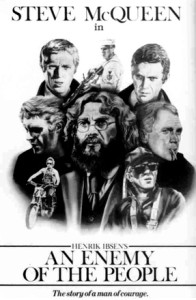 Steve McQueen in An Enemy of the People 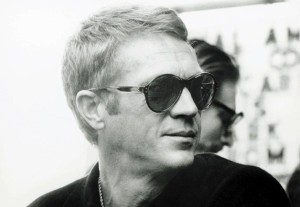 Growing up a film buff is sometimes a tough road, since one is constantly torn between favorite actors, actresses, movies, genres, remakes, sequels, etc. For me, however, one thing was certain: Steve McQueen was just about the coolest actor there ever was. Indeed, Wikipedia calls him “The King of Cool.” We’ll forgive him The Blob, but instead think about some of his other performances: Bullitt, Cincinnati Kid, The Thomas Crown Affair, The Towering Inferno, The Getaway, Papillion, The Sand Pebbles, The Magnificent Seven, and An Enemy of the People. Wait – back that up – did The King of Cool really do Ibsen’s An Enemy of the People? We forgave him The Blob because that was at the beginning of his big screen career (he was also pretty cool in the TV series Wanted: Dead or Alive). But An Enemy of the People was at the height of his “cooldom.” What gives? 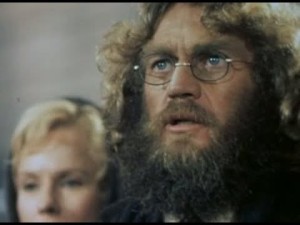 It seems that McQueen, at least according to his former wife, Ali McGraw, had developed a taste for the classics and read Chekov, Strindberg, Ibsen, and others. Apparently, he was tired of playing the same cool guy in the same cool films and wanted to show the public he also had a sensitive and intellectual side. (It was like when Sean Connery at the height of his Bond career in 1965 decided to play British military prisoner in The Hill. Never heard of The Hill? Exactly my point.) McQueen insisted, in fact, on doing Ibsen’s An Enemy of the People, took a pay cut to ensure distribution by Warner Bros, and was even credited as Executive Producer.

The film had a very limited theatrical release circa 1978, bombed at the box office, and fell into relative obscurity until it was resurrected by our content-driven digital age. I had never seen him in An Enemy of the People – primarily because it was gone in the blink of an eye. Those were the days before DVDs, videos, cable, and other assorted ancillary venues for watching obscure and/or forgotten films. Needless to say, it always was on my bucket list to sit down one day and watch it from start to finish.

The urge to move it up the list occurred after my wife and I, as part of our blog, reviewed a production of An Enemy of the People at the Yale Repertory Theatre (see Pillow Talking Review). Reg Rogers played Dr. Thomas Stockmann (the part that Steve McQueen played in the film) and Enrico Colantoni played his brother, Mayor Peter Stockmann. The chemistry between these two talented actors was exceptional. After seeing the arc of the character and Mr. Rogers’s extraordinary performance, I just had to see my former idol in the role. I went home and prayed to the demigod Vudu, and lo and behold it was part of my digital collection in a matter of minutes (with the payment to own).

I was actually surprised by the authenticity and casting of the film. McQueen, himself, personally oversaw certain details of the production from the look and application of his makeup to the construction of the sets. The incomparable stage and screen actor Charles Durning played his brother, Peter Stockmann, and Bibi Anderson was cast as his wife. George Schaefer directed the film based on an adaptation by Henry Miller. 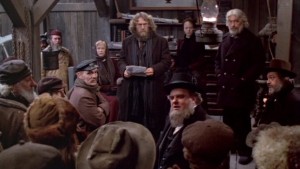 Although it was still Steve McQueen playing a relatively “cool” (maybe tepid is a better adjective) Dr. Stockmann in much the same way he had played dozens of action heroes in the past, it was not a terrible performance at all. In fact, if truth be told, had I not seen Reg Rogers’s stunning performance and had no basis for comparison, I would have thought that my idol gave a very credible characterization. Even his diatribe to the angry mob at the end was quite passionate (although there were multiple camera takes – a luxury not available in stage plays).

All in all, I enjoyed it. If Steve McQueen’s performance as the idealistic Dr. Stockmann was not as popular as the action heroes he was used to playing, at least his choice to try something different was heroic. And of course, I could scratch this one off my bucket list!