Someday Productions, LLC and Pillow Talking are pleased to present the following review of STARWARS BATTLEFRONT Game by Nicholas Dunn 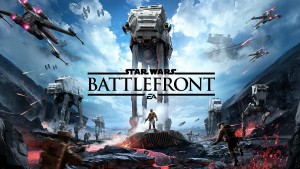 The Star Wars saga has been something that draws you in no matter what generation you are from; it always seems to capture your imagination and wonder. When I first heard they were bringing back the Star Wars Battlefront game to the new consoles all I could think of was my childhood and all the good moments I had with the old games on the PlayStation 2 console. Whether it was being a droid, a clone, a rebel, or a storm trooper, I always was ready to dive in to any battlefield and show I didn’t need the force to be a badass. When I first turned on this game I was astonished by the amazing graphics. Their stunning and elegant beauty would make any fan think they were in the Star Wars universe. You also get a decent variety of choices when creating your character. Even if it takes forever to unlock the true skins or abilities you want, it is still something spectacular.

Unfortunately that’s pretty much where it ends. The gameplay is similar to any other present FPS today and they took out a lot of what people loved from the original two games. There is no campaign in which to indulge yourself and no classes to strategize yourself against opponents. The fact that there were no space battles was a huge loss because it could potentially have set this game separate from many other FPS. They only used the original trilogy (which is the best of course) but when looking at past games, the Clone Wars trilogy did bring some of the best maps to previous Star Wars games. I loved fighting on Kamino or Mustafar and being surrounded by those extreme elements which made the fight more intriguing. The online is very hostile and you really never can get anything done in modes like “Supremacy” or “Walker Assault” unless you’re in a vehicle; other modes like “Droid Run” feel miniscule when it comes to action. The selection of weapons all are those we as fans have seen in the Star Wars movie universe but when it comes to gaming that’s not always a good thing, especially when they all feel the same. When it comes to weapons and loadouts, gamers want diversity and a decent variety to work with so they can find their own strengths. Gamers also like to see what weapons their opponents are using so they may see the potential for how they may be used.

There are some decent modes as well like “Heroes vs. Villains” or “Fighter Squadron” where we get a taste of what we really want from a Star Wars game whether it be becoming a well-known character facing off against other characters or flying that X-wing or TIE fighter you always piloted in your dreams.

Overall the game simply falls short of what I believe gamers and Star Wars fans might want. They were on the right track but I feel it stopped short of something truly beautiful and something that fans could appreciate for years to come (like the original two Battlefronts did). The one thing they did right was with marketing and the release date which was a month before the next movie installment was released. Thanks DICE and EA, but you should know for future reference, a game shouldn’t need 4 DLC packs to make it a decent game – and even at this point, I feel it still falls short of what we actually want in a Star Wars Battlefront game.