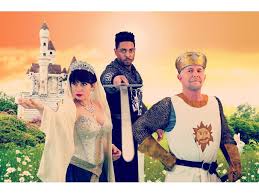 When I was growing up in the ’70s and ’80s, raucous comedy was like Dickens’ A Tale of Two Cities. There were only two main sources for off-color, riotous, risqué, raunchy humor (and I don’t mean Paris or London). One source was America’s own Mel Brooks; the other was England’s Monty Python. In both places you could find guilty pleasure belly laughing at dark comedy, ethnic and gender issues, semantic tomfoolery, and of course, toilet humor.

I am happy to report that the raunchy, riotous, racy humor has held up well over the years as evidenced by Connecticut Repertory Theatre’s new production of Spamalot. The play, written by Eric Idle, is an adaptation of Monty Python’s feature film Monty Python and the Holy Grail. The name Monty Python is shrouded in conspiracy theory today as to whether or not there is indeed such an individual or if it is a name which was made up by the comedy troupe from the ’70s that included Graham Chapman, John Cleese, Terry Gilliam, Eric Idle, Terry Jones and Michael Palin. The troupe was synonymous with sketch comedy which later turned into a multi-million dollar franchise that included everything from T-shirts to Broadway musicals. 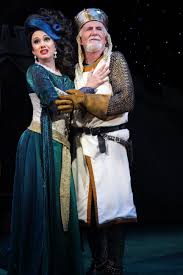 CRT is unique to the extent that it joins veteran actors and student amateurs in a collaborative theatrical endeavor with the third-party beneficiaries being us – the audience. CRT’s Spamalot is simply wonderful. It’s fresh, engaging, witty, offensive (in a good way), passing smiles, chuckles and guffaws to downright belly laughs on the laugh-o-meter. Veteran stage and screen stars Ricard Kline (see our interview) as King Arthur and Mariand Torres as The Lady of The Lake were a pure delight. They played their parts tongue-in-cheek (how could you not with a number titled Diva’s Lament “Whatever Happened to My Part?”. I especially enjoyed when they ad-libbed and broke the fourth wall with both the audience and the band.

Having directed both professional actors and amateur actors in the past, I know there are different issues that can arise in both types of situations. Directing a mixed cast of veteran stage performers and students, however, brings up its own set of challenges. Richard Ruiz, the director, was more than capable of handling the task. He created a seamless, professional product that merited the standing ovation at the end. 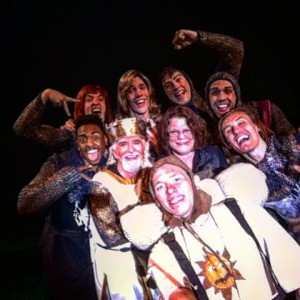 And what about the rest of the cast? For many this may be the first time there names are in a theatre review, but I am certain that it won’t be the last. Richard Ruiz, being an actor himself, brought out the best in his cast, whether it involved acting, singing, or dancing. Special shout outs (in no particular order) must go to Bryce Wood (Sir Lancelot/Tim), Nick Nudler (sir Robin), Gavin McNicholl (Patsy), Jeff DeSisto (Historian/French Taunter), Zack Dictakis (Dennis’ Mother), Joon Ho Oh (French Mime/Sir Not-Appearing-in-this-Show), Ryan Rudewicz (Prince Herbert), Kent Coleman (Sir Belvedere/Concorde), Scott Redmond (Not Dead Fred/French Guard/Lead Minstrel), Derrick Holmes (Finnish Mayor/Guard), Curtis Longfellow (God/Black Knight/Herbert’s Father), Susannah Resnikoff (Knight of Ni). And hats off to the rest of a brilliant and talented cast including Mikaila Baca-Dorion, Valerie Badjan, Juliana Bearse, Olivia Benson, Tabatha Gayle, Sarah Jensen, Kristen Keating Liniger, Chester Martin, Meredith Saran, Ben Senkowski, and Ryan Shea.

Props also must be given to Broadway veteran choreographer and stage manager Tom Kosis (who did an absolutely fantastic job with the dance numbers) music director John Pike, and voice and accent coach David Alan Stern.

Artistic Director and Department Head Vincent J. Cardinal should be both pleased and proud of the valuable contribution CRT makes to the theatre world and the efforts to pass the baton of live theatre to young and passionate newcomers.

The show has given me an earworm since I’ve seen it. I find myself constantly singing (not pretty at all and I’m driving my wife crazy) “Always Look on the Bright Side of Life/Death” – even as I write this review. I can still see the end of the Monty Python’s Life of Brian from where that song is taken with the screen filled with crucified individuals on crosses singing and swaying to the music. Only in a Monty Python project can something like that be pulled off successfully. Cheers Monty to whoever the Hell you are! 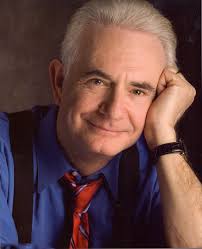 Unlike the line from the film Monty Python and the Holy Grail, I don’t eat Spam a lot. In fact, I’ve never even tried it, nor do I really think I’d like it. But what I did like, in fact thoroughly enjoyed, was Connecticut Repertory Theatre’s (CRT) current mainstage production (and final show of the 2015-2016 season), Spamalot. The goofy, spoofy musical comedy headlines Richard Kline (from one of my all-time favorite television shows, Three’s Company) who reunites with his former co-star of Broadway’s Wicked (one of my all-time favorite Broadway shows!), Mariand Torres, along with a large and tremendously talented cast of actors from University of Connecticut’s MFA and BFA programs. Who could ask for more?

Full disclosure: I’m not an authority on Monty Python nor was I all that familiar with Spamalot, the 2005 Tony Award-winning Broadway production written by Eric Idle, with music by John Du Prez and Idle. But in direct contrast to my husband/co-reviewer, I rather enjoy the surprise of watching a story unfold without knowing beforehand where it is going. I must say, however, that with a fantastically silly, often inane, riotously over-the-top production like this, there was virtually no way to predict what kind of nonsense was going to happen next. It is escapist entertainment at its finest.

And that’s because where else can you see Knights of the Round Table, Marcel Marceau, killer rabbits, flying cows, The Phantom of the Opera, Vegas showgirls, Laker cheerleaders, Jews, soiled wooly tights (don’t ask how), farts, disco dancing, and shrubbery? I usually am not a fan of sophomoric humor either – but like an adolescent, I LOL’d for the entire two hours – and I certainly was not the only one as there were knee-slapping guffaws all around me. 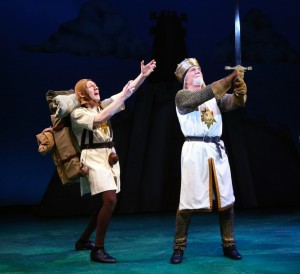 So whose show is it anyway? If she’d have her way, it would be all about Torres’ Lady of the Lake – who, like the “Broadway diva” she portrays, belts out lyrics with tremendous gusto and a ton of humor. But of course it is King Arthur’s story, of his quest to find faithful knights to accompany him in his search for the Holy Grail. Kline is divine as the leader of the ragtag pack; part bumbling idiot, part charming, and always spot-on as he deals with every conceivable (and inconceivable) hitch and glitch along the way. And what a great coup for UCONN’s up-and-coming troupe of actors to have these heavy-hitters share the stage with them!

Spamalot was directed by Richard Ruiz, a 1998 UCONN MFA acting alum whose credits include Off-Broadway, regional theatre, and national tours. Learning that this was his directorial debut came as quite a surprise considering the immense and dynamic nature of this production. It was an incredible undertaking to cast 25 students in the various roles (many of whom doubled, as is customary for Spamalot). While there was not a weak player in the bunch, notable leads were: Gavin McNicoll who was as comical as he was the straight man as Patsy, King Arthur’s trusty servant and coconut-clacking steed; Bryce Wood was phenomenal as Sir Lancelot and Tim the Enchanter – and he has quite a remarkable set of abs! Nick Nudler nailed his performance of Sir Robin, including some very impressive vocals and some creative stage exits after repeatedly soiling his pants. I loved Chester Martin as Sir Dennis Galahad in his fetching blond locks, and Kent Coleman as Sir Bedevere, Concorde, and Ensemble. Zack Dictakis tore up the house as Dennis’ Mother, with her swaying and sagging breasts (he also doubled as Ensemble). Ryan Rudewicz was perfectly flamboyant as Prince Hebert (and he also appeared as a French Guard and Ensemble). Jeff DeSisto mastered his English accent as Historian and also 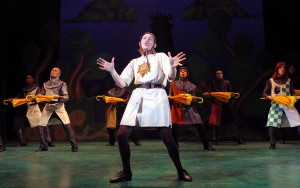 Kudos to Abigail Copeland for very impressive scenic design, Adam Lobelson for lighting, Heather Lesieur for exceptional costumes, Joel Abbott for sound, Josh Winiarski for projection, and Shane McNeal for puppets (UCONN is one of few schools in the country to offer BFA and MFA puppet degree programs). A tremendous hats-off to Tom Kosis for choreography and stage management.

With an outrageous plot to engage, plenty of song and dance to enthrall, and tons of talent to captivate, CRT created a night of truly great theatre. CRT provides its student actors with an opportunity to work with and learn from visiting professional artists in a distinctive and wonderfully developed program environment. Thank you CRT, Richard Kline, and Mariand Torres! 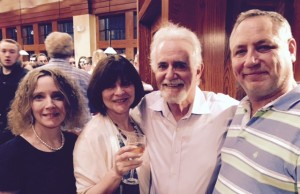