Pillow Talking’s Review of SOMETHING ROTTEN!

Someday Productions LLC and Pillow Talking are pleased to present the following review of SOMETHING ROTTEN! at The Bushnell 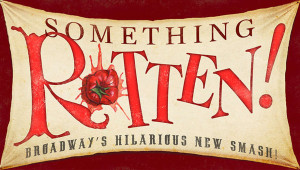 Now is the winter of our discontent… – William Shakespeare

Just google why people hate Shakespeare and the posts are endless. Some will say it’s simply because it was forced upon them in high school. Others will say his work is just too difficult. It’s the language…it’s outdated…it’s long…boring…wordy…incomprehensible. The criticisms are endless. But most of us know that The Bard has been deemed the greatest writer in the English language and the world’s preeminent dramatist. Dial back to the Renaissance, however, and some were not altogether convinced.

Among his harshest enemies, ah, critics is the head of a Renaissance theatre troupe by the name of Nick Bottom, the protagonist of the wildly popular Something Rotten!, a madcap farcical musical at Hartford’s The Bushnell Center for the Performing Arts, directed and choreographed by Casey Nicholaw with book by Karey Kirkpatrick and John O’Farrell and music and lyrics by Wayne Kirkpatrick and Karey Kirkpatrick. Nick and his awkward but talented brother Nigel are eager to create the next big thing but must compete with the popularity and smarmy charm of theatre god William Shakespeare. To add insult to injury, good old Will may also be a thief – how could he possibly have penned Richard II when Nick and Nigel had been mid-production of a work of the same title? What are the brothers to do?

Down the Alice in Wonderland­-esque rabbit hole they go. Driven to succeed and to one-up the obnoxious Will, Nick visits a soothsayer, or so he says he is (he must be, after all he’s the nephew of the one and only Nostradamus), to find out what Shakespeare’s next hit will be. They intend to do it before he can. Lord Clapham, the brothers’ primary patron has had it with their weak works and they’re barely putting food on the table. Before long, Nick and Nigel find themselves working on a musical à la Thomas Nostradamus – a breakfast-themed musical to be precise. “And if music be the food of love – play on!” (Shakespeare, Twelfth Night). Thomas says musicals are next to be the biggest thing since sliced bread, or danishes, or omelettes.

O’Farrell and the Kirkpatricks have thrown in everything including a host of colorful characters and zany plot points, PLUS the proverbial kitchen sink. And it’s an incredibly wild journey. Bea is Nigel’s hilarious and hard-working wife whose plans to defy Elizabethan gender roles produces as many opposite-sex costume switch-ups as Shakespeare’s plays when she disguises herself as a man to help support the struggling household. Shylock is the Jewish money lender with a love of theatre – but the law won’t allow him to throw his money in the pot, so the Bottom brothers have to figure out how to make it happen. Brother Jeremiah is the prissy, prudish Puritan who struggles with maintaining a completely virtuous life (Dr. Sigmund would have a field day with all his Freudian slips) and forcing it upon his wayward and beautiful daughter Portia, who has an affinity for the arts and for Nigel.

With a narrating minstrel, perfectly placed dance breaks (as all musicals must have them despite the fact that they do nothing to move along the plot!), a foursome of handsome back-up singers/dancers (Will Power Backup Boys), and some perfectly whisked eggs, your head will be spinning, but in a good way! There also are endless references to popular musicals – no doubt you’ll pick up on everything from Lés Miserables, Seussical, Anything Goes, Annie, A Chorus Line, Cats, and more. Something Rotten! is a rollicking ride with a host of triple-threats who not only can act, dance, and sing, but who will make you laugh until your sides ache. Rob McClure as Nick Bottom and Josh Grisetti as Nigel Bottom are an incredible pair – the former, endearingly petulant and driven, and the latter, gawkily hopeful and lovestruck. Adam Pascal as Shakespeare is a true rock star – arrogant and swaggering. Maggie Lakis as Bea, is self-assured with wonderful comedic timing. Joel Newsome as Lord Clapham (and as Eyepatch Man and Ensemble), Blake Hammond’s Nostradamus, Jeff Brook’s Shylock, and Scott Cote’s Brother Jeremiah are equally uproariously ridiculous. Autumn Hurlburt as Portia is simply adorable.

If you missed Something Rotten! on Broadway, it’s here in Hartford, but not for long. There’s nothing rotten here – catch it while you can!

Something Rotten! with book by Karey Kirkpatrick and John O’Farrell, is a satirically fictional take on how “The Bard” came up with one of his most famous plays, Hamlet. Much like a disgruntled Salieri, Nick Bottom, who was once Shakespeare’s mentor, is so jealous of his protégé’s success, that he takes his life savings and pays a soothsayer, Thomas Nostradamus, to tell him what will be Shakespeare’s most famous play. Apparently, Thomas is not as good as his uncle, the famous Nostradamus, and while he can see into the future of theatre, his visions are not as clear as crystal. Although he divines the creation of the “musical,” he “sees” Shakespeare’s Hamlet as Omelette: the Musical. Nick runs with the info to his creative younger brother, Nigel Bottom, and schmoozes him into doing a musical about rotten eggs. Nigel, the real brains behind the operation, does not take the Omelette prophesy literally and, instead writes the real Hamlet. Without giving away significant plot elements, suffice it to note that there is a “rub,” “the pen is mightier than the sword” and “all’s well that ends well.”

The recipe for the success of Something Rotten! cannot miss. Take a little bit of Mel Brooks (or maybe a lot) mix it with a few tablespoons of the comedy of Monty Python, have a great musical score by Wayne Kirkpatrick and Karey Kirkpatrick, to-die-for direction and choreography by Casey Nicholaw and – voila! – Something Rotten! is something delicious!

So if you want to see the complete antithesis of something rotten in theatre, see Something Rotten! (I know it’s a cheesy ending. I tried to make it iambic pentameter, but I’m no Shakespeare.)