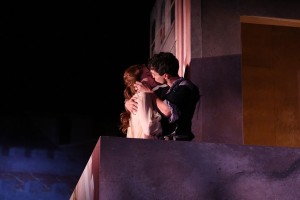 I’ve seen Shakespeare done in all periods and in countless settings. Ditto that for Romeo & Juliet.  I’ve seen it performed in just about every period and era possible from the roaring twenties to war torn Italy to 2050 on Mars (no, just kidding about the last one). I must say it was refreshingly wonderful to actually see Westport Country Playhouse’s version of Romeo & Juliet done in a traditional way with all of the classical trappings including costumes, wigs, a real balcony, sets reflecting the actual time period, etc. In fact, I think the last time I saw any play by Shakespeare performed was back in the 70s when I saw Richard Dreyfuss in Julius Caesar at the Brooklyn Academy of Music (BAM). A major reason for so few adaptations with a classical bent is due to the economics involved in putting up such a production. To be successful, the production must drill down through a veneer of verisimilitude and actually hit the bedrock of realism.

Westport has accomplished a Herculean task in doing just that and a generous amount of kudos must be given to Director Mark Lamos for not only taking on such a task, but completely nailing it.

Well-cast, well-acted, well-staged, this adaptation of Shakespeare has some of the best costumes and wigs (Fabian Fidel Aguilar), scenic design (Michael Yeargan) and set dressing (Faye Armon-Tronsoso) that I have ever seen in a traditional Shakespearian production. It has the ABSOLUTE BEST fight choreography (Michael Rossmy) as well.

James Cusati-Mayer (Romeo) and Nicole Rodenburg (Juliet) are perfectly cast as the ill-fated, star crossed lovers. They both have just the right mix of vulnerability, charisma, and naivete to pull off these iconic roles – and their chemistry is palpable. Patrick Andrews (Mercutio) and Dave Register (Tybalt) show not only their acting chops but also their formidable swordsmanship in the fencing duels. Triney Sandoval was one of the best Capulets I have ever seen. When he threatened his daughter with severe sanctions if she failed to marry Paris, I believed him (and gave a sigh of relief that he was not my dad). Memorable performances also were given by the rest of the supporting cast including Chris Bolan (Montague/Apothecary); Alison Cimmet (Capulet’s Wife); J. Kennneth Campbell (Escalus); Tyler Fauntleroy (Benvolio); Peter Francis James (Friar Laurence); Felicity Jones Latta (Nurse); Jim Ludlum (Samson); Cole Francum (Paris) and Barbara Hentschel (Montague’s Wife). Where would classic films like Kirk Douglas’s Spartacus be without its multitude of background actors (before CGI and the creation of virtual crowds)? The creation of the busy streets of Verona would not have been possible without the creative use of the Ensemble including Adam Coy, Peter Molesworth, Clay Singer, Emily Vrissis, and Jamil Zraikat. A special shout-out must go out to Becca Schneider who Pillow Talking loved in Big River.

As Shakespeare said, All’s Well that Ends Well. (Spoiler alert for maybe the handful of individuals on the space station who have never seen Romeo & Juliet) even though the play does not end well for its principals, it is nevertheless worth the journey back in time to follow the path of these famous star-crossed lovers.

My previous Pillow Talking review of Romeo & Juliet began as this one will, because I cannot help but secretly wish with all the liberties taken in the myriad iterations of Shakespeare’s works, that someone will elect to give it a Hollywood ending. I love the Romeo & Juliet story – a timeless classic – and I know I’m being ridiculous, but the final scene always wrecks me. Alas, star-crossed lovers who are happy and alive and who go off into the sunset together is just the stuff of fanfiction websites and hopeless romantics like myself.

So keep your tissues at the ready, because Westport Country Playhouse stayed true to the Bard – not just in the ending, but also to the original period about which it was written. Playhouse Artistic Director Mark Lamos directed the larger-than-life, iconic work, guiding this production with a sure hand. No stranger to Shakespeare, he led the cast of twenty through the eloquent dance of love, family, conflict, life, death, and fate in the grandest of style.

The story of Romeo and Juliet needs little introduction because as nearly all of us know, it is in fair Verona that despite the feud between the Capulets and Montagues, true love blossoms; but like a flower, it’s time to bloom is limited. For these two young lovers, it withers far sooner than it should – in a mere three days – Romeo and his dearest Juliet meet, marry, and soon die in each other’s arms. 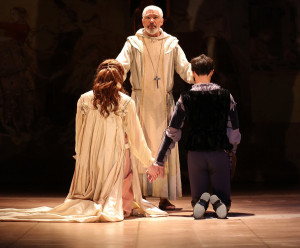 James Cusati-Moyer as Romeo plays the handsome suitor and is endearingly lovestruck by the beautiful Nicole Rodenburg, who is exquisite as Juliet. Their love feels genuine. Cusati-Moyer and Rodenburg capably portray impetuousness of youth, still vulnerable and naïve to the ways of the world, yet knowing and wise at the same time. Felicity Jones Latta as Nurse (also Ensemble) is over-the-top in all the best ways. She is impassioned, dramatic, and often hysterically funny as Juliet’s caregiver. Not to be outdone in the in-your-face department is Patrick Andrews as Mercutio (also Ensemble) – he is an actor with personality-plus. Peter Francis James is a terrific Friar Laurence (also Ensemble), the caring and loyal holy man who doesn’t make the best of choices. 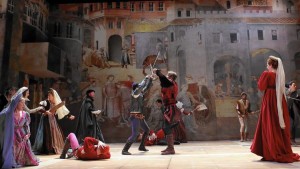 In all of my visits to Westport, I’ve never had an experience when they didn’t deliver, in spades. Whatever the genre and whomever the playwright, you can expect top-notch productions that move and entertain you.