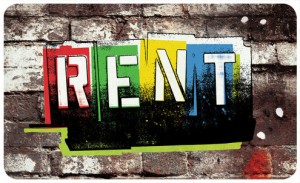 [T]he self-conscious aim of Life is to find expression. Art offers it certain beautiful forms through which it may realize that energy. – Oscar Wilde

We live in a social world where human connection and communication are, like a heartbeat, vital to its existence; a world that simultaneously is fragile and needs attention and hard work to maintain its health and balance. As humans, we may accomplish this through heightened social consciousness, when we value and embrace others, and when we also accept others’ differences. But the world and those of us in it are imperfect and we may need reminders from time to time; art, especially live theatre, often provides us with such cues when it tackles sensitive social issues while likewise providing entertainment to its diverse audiences. Rent is one such production.

Heavily influenced by Puccini’s La Bohème, with direct parallels between most of the characters, Rent is a compelling, socially relevant, heavy “rock musical” which illustrates the resilience of the human spirit under the shadows of much darker themes. It addresses the topics of homelessness, LGBTQ lifestyle, HIV/AIDS, art and finding one’s self through it, passion and love, acceptance, as well as hopes, dreams, fears, and mortality. And while that may be a rather long laundry list, it works – this 1990s Tony Award- and Pulitzer Prize-winning masterpiece whose book, music, and lyrics were written by the late Jonathan Larson (who tragically passed away of an aortic aneurysm at the age of 36, the night before Rent’s Off-Broadway premiere) is among Broadway’s longest running shows. Ivoryton Playhouse, under the direction of Jacqueline Hubbard (who also is executive/artistic director), with musical direction by Michael Morris, and choreography by Todd Underwood, took on the monster task of bringing this powerful piece to Connecticut’s boards. 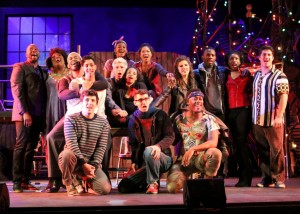 With an exceptionally complex first act, Rent introduces us to its colorful yet mostly marginalized main characters in New York City on Christmas Eve. East Villagers Mark Cohen (Tim Russell) and Roger Davis (Johnny Newcomb) are starving artists who are utilizing an “illegal wood-burning stove” (a trash can) as they try to stay warm in the apartment for which they haven’t paid rent in a year. Mark is an aspiring filmmaker and Roger is a recovering addict and struggling singer/songwriter and guitar player who is HIV-positive. Their former roommate and friend Tom Collins (Patrick Clanton) is a professor and anarchist who is living with AIDS; his plans to pay them a visit go awry when he is mugged and beaten on the street. Angel Dumott Schunard (Jonny Cortes) a young, transgender and pure-of-heart street drummer finds and helps Tom and for the two it is love at first sight. Mimi Marquéz (Alyssa V. Gomez), a young dancer and junkie who also is HIV-positive, shows up at Roger’s apartment to ask for his assistance; there are romantic sparks, but Roger is hesitant as he has just recently lost his long-time girlfriend to suicide after she’d received an HIV diagnosis. Maureen Johnson (Stephanie Genito), Mark’s ex-girlfriend and ex-roommate, is a quirky performance artist who now is in a relationship with her polar opposite, a public-interest attorney Joanne Jefferson (Maritza Bostic) and plans to stage a protest to stand up for the local homeless. Benjamin “Benny” Coffin III (Collin L. Howard) also was the former roommate of the group, until he married money and now is the “sell-out” sleazy landlord of the building.

Rent follows the hardships of the characters in two acts which span over the course of a year, ending on the following Christmas Eve. Love, loss, and the bumpy road of self-discovery trouble the group which are illustrated in the plethora of pulsating musical numbers (forty two in all). There are multiple, intersecting storylines which initially can become a bit confusing and muddled, although like untwisting a tangled cord, it is a relief as they eventually smooth out in Act Two. The characters all are passionate in a multitude of ways – but for each, their paths are highly individual. For some, money, fear, and self-doubt are their hindrances. For others, it’s living on the edge – and contracting HIV and AIDS are the price they pay. 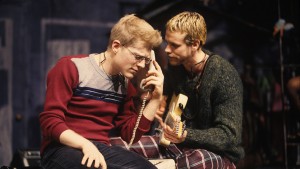 The production was well cast and for the most part, capably took on the task of the intense musical score for which Rent is famous. As for the male leads, Russell as Mark who also is the show’s narrator is excellent as the nerdy friend to all; he takes few risks and is most comfortable when he’s engaged behind the camera lens rather than in the real world. Newcomb is a terrifically angst-ridden and sullen Roger; his shattered dreams and fears are written all over his face much like the song he’s desperate to compose. Clanton as Tom is sincere, passionate, with a voice that soars through playhouse with true depth of emotion. Cortes brought captivating authenticity to the role of Angel, the charismatic, pure, self-assured, lover of all things love. Additionally, the chemistry between Tom and Angel is both palpable and heart wrenching. Finally, Howard’s Benny is spot-on as the bulldog who’s caught between the avarice and friendship.

And for the female leads, Gomez’s Mimi is pure delight. She brings a youthful sexiness and spunk to the character who at the same time is a vulnerable waif who’s lived a hard life and one whose “candle” because of AIDS in the 1990s, is sure to be snuffed out before her time. Genito as Maureen lays it on thickly as the brazen, cheeky, self-assured, and flirtatious artist whose rendition of “Over the Moon” was sidesplittingly Over-the-top in the best of ways. And Bostic’s Joanne is feisty and firm, as she holds her own against her devil-may-care partner.

Fabulous scenic design by Martin Scott Marchitto set the perfect tone for the East Village apartment and surrounding areas, making wonderful use of Ivoryton’s modest stage with costumes by Lisa Bebey which added to the bohemian vibe. Kudos also to Marcus Abbott for lighting, Tate R. Burmeister for sound, Elizabeth Cipollina for hair/wig design, and also to Laura Lynn Knowles as stage manager.

Ivoryton successfully brings Rent to life as the layered tale that it is, told with sincerity and fervency. Despite the fact that many of its characters are living on borrowed time (as we all are) its messages are to embrace life and live it genuinely and to its fullest. It is a moving piece that is well-worth seeing.

Rent was the show that made me want to write. Or that showed me you’re allowed to write. – Lin-Manuel Miranda

Rent can mean a lot of things. It can be the sum a tenant pays his landlord – probably the most common meaning. But it also can be something that you pay someone for the use of something. Less common, it can mean torn apart.

All of those definitions and more apply to Rent the play, one of the longest running musicals of all time. The producers paid a great deal of rent (pun intended) in housing Rent on Broadway since it played over 12 years and five thousand-plus performances. The book, music, and lyrics were written by Jonathan Larson and it is based very loosely on Puccini’s opera La Bohème. The story revolves around a group of artists and bohemians in Greenwich Village at the height of the AIDS crisis. Paying the rent becomes a literal metaphor for not only surviving in New York City, but life itself.

Still fairly controversial because of its content after all these years, Rent also presents somewhat of a risk for regional and community theatres. Director Jacqueline Hubbard and Ivoryton Playhouse should be commended for their choice in bringing this important piece of theatre to the community (even over the objection of some local residents according to the grapevine).

Overall, the play is well-directed and well-acted. There are some confusing moments in the first act, however. I wasn’t sure if it was the audio or the pacing, but it was somewhat difficult to follow the multiple story lines and characters. The second act, however, is quite dynamic, and ultimately resolves any remnants of confusion from the first act. 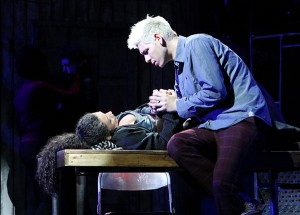 While the talented cast is too large to comment on every actor’s performance, there were several standouts. Johnny Newcomb as Roger and Tim Russell as Mark, the two main characters and roommates, are excellent. Alyssa V. Gomez killed the role of Mimi Marquez, the exotic dancer and Roger and Mark’s neighbor. The pivotal role of Angel is touchingly played by Johnny Cortes. Patrick Clanton’s portrayal of Tom Collins, Angel’s lover and later caregiver, is simply wonderful. The rather mix-matched couple of Maureen and Joanne are played spot-on with great chemistry by respectively, Stephanie Genito and Maritza Bostic. Sandra W. Lee, whose performance Pillow Talking enjoyed in Avenue Q, is equally enjoyable as Mrs. Cohen (Pillow Talking salutes her as a real-life disabled vet who continues to take on challenging acting roles). Finally, Collin L. Howard is terrific as Benjamin “Benny” Coffin III, the guy you want to hate, but his charisma just won’t let you.

“Seasons of Love,” the main musical number of the show which opens the second act, is both powerful and moving. Special shout outs for this number go to Sheniqua Denise Trotman Soloist 1 and Jamal Shuriah, Dance Captain and Soloist 2. The staging of “Seasons of Love” both at the beginning and end of Act II is particularly effective. In fact, despite the large cast, the staging, blocking, and choreography is creatively and economically used thanks to Jacqueline Hubbard, Music Director Michael Morris and Choreographer Todd Underwood.

It is both a shame and ironic that Jonathan Larson died suddenly at a young age the day before Rent opened on Off-Broadway. Sadly, Mr. Larson’s lease on life was cut prematurely short. However, his legacy lives on thanks to bold and progressive theater venues like Ivoryton Playhouse.