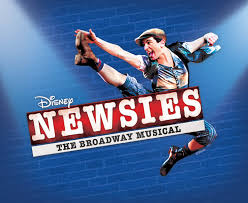 Having reviewed hundreds of theatrical productions, from straight plays to musicals, from dramatic to comedic, and from Shakespeare to Disney to new works, there are few surprises that cross my path. It can also be a challenge to see productions for the second, third, or even fifth or sixth times and come up with something new to say about them. But then there’s a gem – a play or a musical that just stands out – one that from start to finish is a polished, masterful confection featuring a great story, multi-talented performers who can both tear up the boards and blow the roof off a theatre, dazzling sets, and staging and direction that truly knock your socks off. Westchester Broadway Theatre’s (WBT) Newsies, under the guiding hand of skilled director Mark Martino, is one such production. And while I usually wait until the last line of my review to say so, RUN, don’t walk to your computer or the box office to get your tickets before they’re gone!

With a lively book written by Harvey Fierstein (based on the Disney film written by Bob Tzudiker and Noni White), Newsies is about the real newsboys’ strike of 1899, when young orphaned and homeless pape-toters stood up to tycoons Joseph Pulitzer of The World and William Randolph Hearst of The Journal to demand fair wages and acceptable treatment. After the Spanish-American War ended, the unscrupulous publishers found themselves with little to fill their pages in order to continue lining their own over-filled pockets, so they instead elected to raise the price per paper, resulting in a drastic reduction to the poor newsboys’ profits. The pennies they’d been earning barely allowed them to eke by as it was, and they had no other options to survive. But, with strength and support in numbers, the boys (and at WBT, girls, too!) pushed back! They organized a union and staged a strike. “If we stand as one / Someday becomes somehow…” is the poignant line from the song “Seize the Day.”

The icing on the proverbial cake and that which makes Newsies even more incredible are the songs and choreography – it rises to the level of spectacular. With music by Alan Menken and lyrics by Jack Feldman, orchestrations by Danny Troob, incidental music and vocal arrangements by Michael Kosarin, and dance arrangements by Mark Hummel, WBT’s production also features choreography by Shea Sullivan and musical direction by Bob Bray. Newsies is a high-energy, non-stop creation that never hits a lull. Am I gushing? Yes, and it’s well deserved.

Newsies stars Daniel Scott Walton as Jack Kelly – a triple-threat who brings swagger, charisma, and heart to the role of the leader of the newsboys. His chemistry with co-star Mary Beth Donahoe as Katherine Plumber is palpable (and they looked like the thoroughly enjoyed every one of their many liplocks!). Donahoe’s sharp-tongued, smart and sassy Katherine flexed all the brawn necessary for a girl to be seen, heard, and taken seriously during an era that did not embrace females in the publishing industry. Jack’s best friend Crutchie, played by Patrick Tombs is the sweetly optimistic and hardily resilient newsie who doesn’t allow his disability to define him (except perhaps where it gains sympathy to sell more papes). Tombs is a terrific talent, who brings to light the importance of casting actors with disabilities.

Alec Cohen as Davey and Benjamin Wohl as Les are a fabulous duo as the brothers who enter the newsies’ world for different reasons. Despite having a family, they’re compelled to bring financial aid their struggling parents – and they offer considerable support to the newsies in helping organize the strike and establish a union. Stuart Marland as Pulitzer is great as the arrogant, unsympathetic man you love to hate; Galyana Castillo is a superb Medda Larkin (and also a Nun), good friend to Jack and the larger-than-life saloon singer who offers her theatre to the newsies. 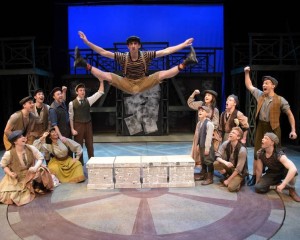 As always, WBT provides a great night of dining (if desired) and a show – but this one ranks up there with the best of them. Whether or not you’ve seen Newsies elsewhere, take my word for it, you won’t want to miss it!

HEADLINE: EXTRA! EXTRA! READ ALL ABOUT IT! WESTCHESTER BROADWAY THEATRE’S NEWSIES IS A TOUR DE FORCE – A MUST SEE!

This pretty much sums up the rave review I am about to give Newsies at Westchester Broadway Theatre (WBT). There was not a weak link in the entire production. The direction, casting, singing, acting, and choreography are all show-stopping in their own way.

Of course, it did not hurt that Newsies is a fabulous show when done properly, based on the Disney film written by Bob Tzudiker and Noni White with music by Alan Menken, lyrics by Jack Feldman, and a fantastic book by none other than Harvey Fierstein.

The story follows the group of rag-tag “newsies” who sell papers for the wealthy publishers like Pulitzer. (Since our novel Going All In written by me and my co-reviewer/wife Stephanie C. Lyons-Keeley did not win a Pulitzer, I feel justified in taking a few pot shots at the character who, for the most part, is played with just the right amount of greed and dark triad narcissism by Stuart Marland.) But I digress. Back to the plot. 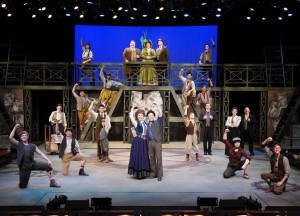 Daniel Scott Walton is Mastercard priceless as Jack Kelly, the leader of the newsies who eventually becomes a union organizer. He has the whole package which he displays throughout the play: acting, singing, and dancing. He and his love interest and fellow lead, Mary Beth Donahoe (Katherine Plumber) have great chemistry – so much so that their kisses actually had me squirming a bit in my seat! A special shout must also go to Patrick Tombs whose heart-rendering portrayal of a disabled teen on crutches underscored the emotional drama and historical context of the play.

Kudos also must go to the engaging musical direction of Bob Bray and, of course, the masterful direction of Mark Martino whose vision was palpable. Perhaps it was the set design by Steve Loftus and the brilliant choreography by Shea Sullivan, but every inch of the stage was used to good measure and I must add sitting in the second row was better than any 3-D rendition at an IMAX theatre.

In sum, two words about Newsies – SEE IT!