Someday Productions LLC and Pillow Talking are pleased to present the following review of the world premiere of NECTAR by Katie Bladwin Eng at Axial Theatre, NY 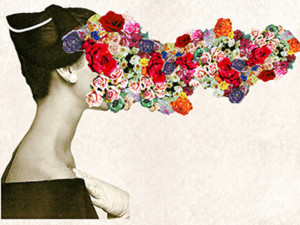 The word “nectar” can be defined as a sweet liquid that is often inside flowers, where it serves to attract pollinators and is used by bees to make honey. In Greek and Roman mythology, it is the drink of the gods, literally meaning “to overcome death.”

As a symbol of spiritual nourishment, nectar may be the sustenance we require to be fully alive; it can uplift, transform, and transcend. And in playwright Katie Baldwin Eng’s Nectar, this intoxicating essence does just that – and it emerges from the most unusual of places. A play about love, loss, growth, healing, and magic, this rare, mystical nectar is something akin to an enchanted lifeforce which also exists for Baldwin Eng’s characters within the physical realm.

Audrey is a very pregnant woman from the Midwest who is on her babymoon with her husband in Europe. One day on her way to get a loaf of bread, she runs into diva film star Veronique on the street and the two hit it off in an hours-long chat over wine and tea, despite vast differences that lie between them. They do, however, have one common thread – both had an intensely passionate relationship with the same man: the elderly and dying Max, who now lies in a coma in hospital room 101.

Max, whom we never see, is a prolific artist and an even more prolific ladies’ man. Even near death, his captivating force draws all the bees to him – it seems everyone he’s ever touched (literally and/or figuratively) has been forever changed and none will ever forget his potent impact.

A story rife with symbolism, told with quick, sharp dialogue, and bold, often graphically sexual humor, Audrey and Veronique aren’t the only past or present lovers who appear at his bedside. We soon meet Nastya (short for Nasturtium, as she is indeed a flower), who speaks an entirely different language, understood only by the fertile Audrey. She is a fragile, vulnerable soul, who like nasturtium, dies back then reemerges anew. There also is the peculiar hospital Nurse who just has known Max since he’s been on the verge of death, but is the only one who has the key to his room.

Enter Christopher, the flamboyantly gay man who’s also had relations with Max (again, told in explicit detail). Soon he and Audrey bond in an entirely different, bizarre and inexplicable way, but you’ll have to see Nectar to find out how. Even the Pope appears at Max’s bedside, and one wonders from his allusions about the circumstances surrounding their relationship. Chloe, Max’s wife, arrives and we are to believe she is something of a saint (or a certain idiot) as she’s loyal to her philandering husband to a fault; she’s accompanied by her petulant adult daughter, Margot. Chloe appears to have some deep, unfathomable understanding of her husband’s heady effects on these people and is also somehow okay with it. Finally, Henry, Audrey’s husband, enters in the final moments, as the peculiar circle of life realigns the entire group.

Kudos to Baldwin Eng for this thought-provoking work. To Isabelle Coler for costume design (and the chuckle I got from the piece I called the “Rainbow Brite” pregnancy belly); to Diana Dávila as Technical Director; Sabrina Fuchs as Assistant Stage Manager; Cat Hickerson as Stage Manager; Dijon Jackson as Carpenter; Sam Kaseta for sound design; Devorah Kengmana for unique and impactful lighting and projection design. Also to Heather Kornreich as Set Designer, Mary Cate Mangum as Production Manager; Casey Alexander Smith for props design; and Jeff Tang for music.

As a symbolic representation of one’s existence and living fully present, nectar is that which can be extracted from what blossoms in our lives. Just as one needs to open oneself to grow one needs to experience Nectar with an open mind. It is truly, quite an experience!

Everything you can imagine is real.   – Pablo Picasso

We are one, after all, you and I. Together we suffer, together exist, and forever will create each other  – Pierre Teilhard de Chardin

I consider myself a literate person. After all, I’ve read a plethora of classics in my tenure as a culture vulture, from Dante to Stephen King and everything in between including Milton, Shakespeare, Camus, and even Anthony Trollope (including the Sparknotes for each) – always useful for cocktail chit-chat. My eclectic tastes range from existentialism and quantum physics to Elvis Presley movies. Needless to say, I am always on the hunt for really mentally challenging art. I found such a piece in Axial Theatre’s World Premiere of Nectar by Katie Baldwin Eng. To coin a phrase from Steve Martin’s Meteor Shower (which I was reminded of while watching Nectar), I walked out of the theatre with exploding head – there was just so much mental fodder vis-à-vis motifs, symbolism, characterizations, etc. with which to wrestle Indeed, Nectar is a play which haunts you to the point where you may find yourself waking up at three in the morning exclaiming, “I get it!”

The breath of Nectar can be summed up like the metaphysical opening of the classic TV show, Ben Casey, where actor Sam Jaffe, as an omniscient voice-over narrator draws the following symbols on a blackboard at the start of each episode: Man, Woman, Birth, Death, Infinity. That just about covers everything in both the universe and Ms. Eng’s imaginative play.

The story follows the very pregnant Audrey on her vacation in France. She happens to bump into an aging diva, Veronique, who is the mistress of the uber-charismatic and internationally known author, Maximilian. This chance meeting dredges up fond memories of Audrey’s own affair she had with Max twenty years ago. Before you know it, the two mistresses are swapping lascivious tales about Max like members of The First Wives Club. Veronique discloses that Max is in a coma and invites Audrey to accompany her to hospital to see him. The two soon find out that they are not the only ones who had emotional and physical relationships with Max. It seems that everyone who came into contact with him eventually came to know him in the Biblical sense, whether they be female, male, or a human female morphing into a nasturtium – a flower, my wife and co-reviewer told me.

Who is Max? We know that he is in room 101 – the starting level for any subject in life. Like Kevin Costner who played the uncredited corpse in The Big Chill, we never see Max in the flesh, but his presence is felt throughout the play. Is he a devil (like Harvey Weinstein) or saint (like John Travolta as the archangel in Michael who has an affinity for human lust)? While it is never made clear, it is definite that Max has the irresistible nectar of life that everyone seems to want to imbibe. According to Merriam Webster, the definition of nectar is the saccharine section of a plant, which attracts the insects or birds that pollinate the flower. Nectar also has been defined as the drink of the gods. Religious undertones abound including a not-so-subtle appearance by the Pope himself dressed in full regalia and burning incense.

Nectar is a funny, thought-provoking and richly metaphorical coming-of-age story in the tradition of the Pulitzer Prize-winning playwright, Paula Vogel. It is one that needs to be experienced before its petals, like the ones in Beauty and the Beast, wither away.