Someday Productions LLC and Pillow Talking are pleased to present the following review of MIDSUMMER at TheaterWorks Hartford. 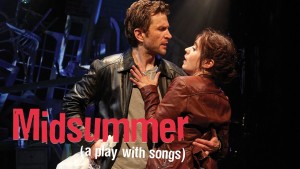 Midsummer may already have passed us by, but Midsummer (a play with songs) at Hartford’s TheaterWorks is in full swing and simply stated, it is utter rapture. But before I wax poetic, I’m compelled to say at the outset that I’ve not spent a more enjoyable evening at the theatre (or anywhere for that matter) in a very long time. For me great theatre means I’m transported somewhere wonderful; somewhere I may lose myself in another’s life story and for the entirety, I’ll not think for a moment about returning to my own. This experience went well beyond great on the theatre meter and shot up to the level of incredible, amazing, tantalizing stage work.

The title of the play is fitting for so many reasons. “Midsummer” or the summer solstice is when the play takes place and is the occasion when Mother Earth is released from winter’s icy grasp and thus comes the onset of summer; along with it, there also is hope for renewal and rebirth. The longest day of the year (and subsequently, the shortest night), it is a time to celebrate and a time to play; it’s when passions are fueled and when romance is in bloom. Love is in the air.

But love can be capricious as Shakespeare tells us in A Midsummer Night’s Dream, and his Helena was at the center of such inconstancy. And for David Greig and Gordon McIntyre’s Helena in Midsummer (a play with songs), love is equally as impulsive and unpredictable. Because who could guess that this Helena, a wealthy divorce lawyer with a penchant for the drink and married men, would pursue (and ultimately fall for) “Medium Bob,” a “piss artist” (a drunken storyteller) who works on the fringes of Edinburgh’s criminal underworld and who has not a single defining feature? Who could guess that after a night of wild abandon and weekend to follow, the two who seemingly have nothing in common would have everything in common? And who could guess that Cupid might shoot his arrow straight through the two damaged hearts and heal them both?

Alas, their path would not be an easy one… “Ay me! for aught that I could ever read, Could ever hear by tale or history, The course of true love never did run smooth.” (William Shakespeare, A Midsummer Night’s Dream). But it was a raucous good time!

With just two actors on a beautifully intricate but at the same time simple and static set (except for the shuffling of a few chairs which represent bar stools, cars, a park bench, etc.) it is a show that is as unique as it is delightful. Straying from the straight play or musical formats, it is neither and it is both, at least somewhat. In an interview with Greig, he’d said, “Most musicals I know have about 20 numbers in them and we’ve got six…In a musical you have an orchestra; we have two actors playing their acoustic guitars. If a musical has a chorus line, we have dancing lobsters.” And what you also have is witty repartee, simulated sex, height challenged mobsters, bumbled wedding parties, goths, bushy eyebrows, and as Greig said, boogying shellfish.

At the crux: Helena has a problem – rather she has many. But right now she’s sitting alone watching the rain fall with an expensive bottle of Sauvignon blanc at Edinburgh’s Whighams Wine Cellars after being stood up by her unreliable married lover (shocking). She’s childless, unfulfilled, often drunk, and not too keen about her life’s trajectory. She decides to take a gamble on another problem child who sits across the bar, a man whose body is tied up in knots: Robert Victor Morris Liddell Hope Macartney (Bob), who’s reading Dostoevsky’s Notes from the Underground and awaiting word from Big Tiny Tam Callaghan’s messenger about his next dirty job. For Bob, life went soaring downhill after high school graduation and there he’s remained, both feet firmly planted in the muck at the bottom.

For the next hour and half, we are mesmerized while we gleefully follow the unlikely pair as they tell their tall tale – directly to us, the audience. There’s no fourth wall from the outset, broken from the moment the lights go down in the theatre and go up on the stage. Each with their Taylor guitars, Helena and Bob strum, sing, and chatter away both with each other and individually, bringing us into their lives with such incredible authenticity, you feel as if you also are a patron at Whighams listening to them carry on while you share that bottle of Sauvignon blanc (and probably several more). There is not a single dull moment and you honestly won’t want it to end. 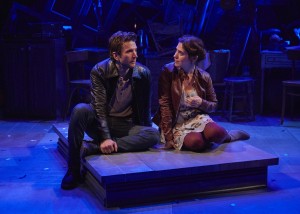 Tracy Brigden masterfully directed newcomers to TheaterWorks, Rebecca Hart as Helena and M. Scott McLean as Bob who are a director’s dream: actors who embody their roles as if they are the characters, whose chemistry is palpable, and whose performances are beguiling. They also are triple threats with stellar acting chops, as well as lilting voices and adept guitar-strumming fingers, perfect for the folksy song score. They have excellent comedic timing as well and I especially loved when each morphed into other characters as part of the other’s monologues – namely when Hart crouched down as Big Tiny Tam and McLean as Helena’s Elmo-loving, vomit-fearing nephew.

Narelle Sissons designed simple costumes which reflected the core of each character’s personality, despite the fact that there were “scene changes” (if only because of their piss artistry) and from time to time, there were headbands, hats, and bushy eyebrows plastered on – quite humorously, I might add. Sisson also was responsible for the excellent set. Kudos to Andrew Ostrowski for lighting and Elizabeth Atkinson for sound; Michael Morris for music coaching and Gillian Lane-Plescia for dialect coaching (Hart and McLean nailed their Scottish accents so much so, that I was surprised to hear them speaking with American accents in the post-show talk-back).

With cheeky songs titled, “The Song of Bob’s Cock,” “The Hangover Song,” and “Japanese Rope Bondage,” you can expect uproarious moments that are not exactly PG – but each works so sidesplittingly and pricelessly into the narrative. Ultimately, Helena and Bob teach us that change is possible (or more accurately, it is a parking meter that doles out such profundity); but the underscore of any good romantic comedy is “Love will break your heart (but I’ll take my chances with you)” and this is why we are attracted to rom-coms in the first place. Thank you TheaterWorks and producing artistic director Rob Ruggiero for always coming through – for bringing what we’ve come to expect as distinctive, thought-provoking, and top-notch theatre to Connecticut.

You will need to know the following from the Midsummer (a play with songs) mini-thesaurus in the play’s program to fully understand this review:

Piss Artist – a storyteller, often a person who is especially loquacious when drinking

Bog-standard – used to describe something which is perfectly ordinary.

Chum – to accompany someone

Jings – an exclamation equivalent to gosh or golly

Midsummer (a play with songs) is a brilliant tour de force that defines what musical theatre and romantic comedies should be. 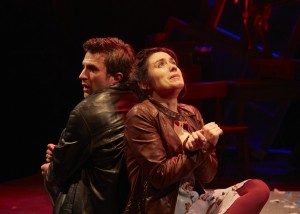 Before I gush more, let me explain. My wife and co-reviewer maintains our schedule on a weekly basis. Consequently, I rarely know what we are seeing in advance. When she told me we were seeing Midsummer at TheaterWorks at Hartford, my initial reaction was yet another adaptation of Shakespeare’s A Midsummer Night’s Dream. When she told me that it was a play with songs and involved a criminal, a lawyer, a love story, and was Scottish, I thought it wasn’t an adaptation of Shakespeare, but more like a bastardization of the Bard. And Scottish? Sure, I’m a Sean Connery fan and I loved The Molly Maguires, but I just didn’t see how it all fit together. Then I read the description of the book on Amazon: Midsummer is the story of a great lost weekend of bridge-burning, car chases, wedding bust-ups, bondage, miscalculations, midnight trysts and self-loathing hangovers. And the play was only ninety minutes with two characters.

Jings, now I was convinced that there was just no way this play would captivate, much less entertain, much less make sense. Three strikes and I was out at the plate. I was so wrong. Midsummer DID captivate, DID entertain and DID make perfect sense. Moreover, it was thoroughly engaging from start to finish. I walked away with the green-eyed monster hanging off my shoulder, jealous that I did not write, direct or cast this wonderful play.

Midsummer is actually a misnomer. It should actually be called When Bob Met Helena in the classic romantic comedy tradition of When Harry Met Sally. It was that good.

The play was written by virtuoso Piss Artists David Greig and Gordon McIntyre and was masterfully directed by Tracy Brigden. The writing was sharp, economical, and witty. The staging and blocking were perfect. The casting was simply superb. The performances rendered by M. Scott McLean as Bob and Rebecca Hart as Helena were stunning; MasterCard priceless. Indeed, the chemistry between them was palpable. Their Scottish accents, like their singing, guitar playing, and acting, were impeccable. And their comedic timing was flawless; two actors working in perfect synch with each other.

Overall the play was side-splitting hysterical, touching, and a totally feel-good event. The talking head routine (and I don’t mean the one that houses the brain) ranks among comedy routines like “Who’s on First?”  I did not want the show to end. My only regret is that we saw the show relatively late in its run – “Aye, the nights are fair drawing in” — and thus we do not have as much time as we’d like to piss art all of the play’s positive attributes. See this show with some Chums before it disappears leaving only Bog-standard fodder as alternatives.

Kudos to Artistic Director Rob Ruggerio and TheaterWorks for bringing another example of great theatre to the area.