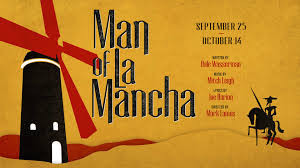 For More Information or Tickets

Too much sanity may be madness — and maddest of all: to see life as it is, and not as it should be!  ― Dale Wasserman, Man of La Mancha

Some say that “madness” is the key to creativity. While the psychological community’s jury is still out in that regard, madness or rather, mental illness, may instead simply be the key to a more open mind – a mind without filter; a richer essence that travels outside the proverbial box and that which is not inhibited by the everyday mental constraints most of us impose upon ourselves.

Nevertheless, there isn’t anyone who isn’t a prisoner to their own psyche. We are each bound by a unique consciousness that reflects our innermost thoughts and feelings and ultimately controls how we gauge the world in every action and interaction. On the one hand, we might view life through rose-colored glasses; on the other, perhaps they are of a jade hue (we are therefore, jaded). Through his Man of La Mancha, American playwright Dale Wasserman (along with Mitch Leigh, music; and Joe Darion, lyrics) might have wanted us to consider the potency of this phenomenon as well as the incredible power that positivity holds in our lives. Perhaps his character of Don Quixote is less madman and more teacher – a man who leads by example; and he surely must know something the rest of us don’t. In incredible tragicomic La Mancha, Quixote is a man who believes not what is before him, per se, but instead what he wishes to believe – and it’s often quite unlike the reality everyone else perceives. He is an eccentric who at times borders on absurd, but through optimism, generosity, and kindness, he endeavors to trump the all the ills which surround him.

My most recent excursion to Westport Country Playhouse proved to be a night to remember, because despite having seen Man of La Mancha numerous times, Westport, under the guiding hand of director Mark Lamos, did a phenomenal job bringing the beautiful story to the stage. With exceptional talent, soaring vocals, and brilliant staging, Man of La Mancha will give you chills of the very best kind.

Set in the late 1600s during the Spanish Inquisition, tax collector Miguel de Cervantes (who is also a failed poet and playwright) finds himself in a dungeon alongside his manservant after the two have foreclosed on a church. When his fellow prisoners put him “on trial” and threaten to relieve him of his possessions, Cervantes requests a defense. He is granted it and attempts to prove himself to the aggressive bunch by staging a play (Wasserman utilizes the device of a play-within-a-play), using the other prisoners as his cast. He helms the production, assuming the role of Alonso Quijano, a chivalrous albeit addled gentleman who believes himself to be a knight-errant who dubs himself Don Quixote de La Mancha. His manservant, Sancho Panza, accompanies him in his adventures.

The two set out, first battling the “Enchanter” (an evil magician who is actually just a windmill). They continue on for a stay at a castle (which actually is a run-down inn) where they meet Aldonza, a serving wench, who is constantly propositioned by a pack of brutal muleteers. Quixote quickly falls in love with her – and he chooses to call her his “Dulcinea.” He is eventually knighted although in the end he falls ill, and must contend with his disloyal and disapproving family.

Lamos, who is also Westport’s Artistic Director, leads the incredible cast in the masterful production. Philip Hernandez takes the stage in an unforgettable portrayal of Cervantes/Quijano/Quixote. As for the prior productions I’ve seen, he triumphs above all (it should be noted that Hernandez is the only actor in Broadway history to pay both Jean Valjean and Inspector Javert in Les Miserablés). Gisela Adisa is enormously moving as Aldonza/Dulcinea, authentically displaying the character’s rough outer layers which peel away to expose the gentle heart that beats beneath. Tony Manna as Sancho Panza/Prisoner is wonderful as the devoted yet idiosyncratic manservant and nodding minion to his master.

David Sattler as Governor/Prisoner is superb as the heartless leader of the dungeon. Michael Mendez is outstanding as the Innkeeper/Tenorio/Prisoner. Clay Singer is terrific as The Duke/Carrasco/Prisoner. Carlos Encinias as the Padre/Prisoner is exceptional. Ceasar F. Barajas as Pedro/Prisoner is detestable, as he should be, leading the muleteers’ attack on Aldonza (and can he crack a whip). Paola Hernandez as Antonia/Prisoner nails it as Quijano’s self-interested niece. Lulu Picart does a wonderful job as Maria/Housekeeper/Prisoner/On Stage Guitar Player. Ian Paget as Captain/Anselmo/Prisoner is perfectly imposing. Esteban Suero nails it as the comedic Barber/Jose/Prisoner. And finally, Michael Scott Gomez as Paco/Guard/Horse/Prisoner and Jermain Rowe as Guard/Juan/Horse/Prisoner are quite special, most notably as the horses.

Human potential is endless, limited only by our will. Not only does Man of La Mancha and the story of Don Quixote teaches us this, but Westport mirrors the same as they continue to create on stage magic, production after production. This one is not to be missed.

There is an exhibit at the Bronx Zoo which leads you down a dark and narrow hallway to a glass enclosure with a sign announcing in bold letters, “The Most Dangerous Animal in The World.” As one peers with some trepidation into the enclosure, the visitor is shocked to see his or her own visage staring back. Now you may be saying what on Earth does all this have to do with a review of Westport Country Playhouse’s Man of La Mancha? Well, years ago I may have said, “Nothing.” Having matured and seen several versions of the play, I can now say with some degree of confidence, “Everything.”

Yes, I could boast my culture-vulturism or my predilection towards intermission chit-chat by regaling you with the play’s motifs about reality versus surrealism via the play-within-a-play structure – but it’s all been done better by other critics and can be easily found in the Spark Notes. What struck me about this particular version was the Black Knight that was created out of a series of gigantic mirror-like armaments – one of which (the shield) ultimately brings Don Quixote back to his “senses” and presumably, to reality.

I now see the play as larger than perhaps the idealism of its major character and the effect he has on the other characters of the play. Indeed, it represents a bold statement that we should not look at the world as it is – or in the mirror – but to “see” it as it ought to be and act accordingly. In our current divisive society, think about the healing effect of such an outlook. I dare say, if everyone followed the play’s motif that the world should be seen as it ought to be rather than what it is, what a different world it would be.

Having waxed philosophical, I can now get to Westport’s version of Man of La Mancha and state categorically that it is one of the best I have ever seen. The direction, casting, and staging all are stunning. Philip Hernandez as Don Quixote has some big shoes to fill (Tony Award-winning Richard Kiley being just one of the many brilliant performers who has played the role in the past). Yet Mr. Hernandez fills those shoes as if they were custom made for him. While he has a strong, commanding presence, he also exhibits the vulnerability and even at times insecurity that the character must have. I always know how good an actor playing Don Quixote is by his rendition of one of my favorite songs of all time, “The Impossible Dream.” Mr. Hernandez was off the charts and a double layer of goose bumps sprouted on my forearms.

The entire cast was simply wonderful. Gisela Adisa not only gave an amazing performance as Aldonza, but she proved she could hang notes in the air with the best of them. Her reprise of the musical number, “Dulcinea” was hauntingly beautiful. Tony Manna as Sancho Panza, loyal minion to Don Quixote, played the perfect comedic foil and sidekick to Quixote. I also really liked his solo, “I Really Like Him,” pun intended. Carlos Encinias was perfectly cast as the Padre. He had an angelic voice that reached empyreal heights during, “The Psalm.” The cathedral-like illusion was handsomely enhanced by Pedro, forcefully portrayed by Ceasar F. Barajas who played a crucified Christ on the cross. Rich characterizations and additional comic relief were supplied by Esteban Suero as the Barber and Michael Mendez as the Innkeeper. Props must go to the remainder of the talented Ensemble which included Paola Hernandez (Antonia/Prisoner), Ian Paget (Captain/Anselmo/Prisoner), Lulu Picart (Maria/Housekeeper/Prisoner/On stage Guitar Player), and David Sattler (Governor/Prisoner).

As Ludwig Mies van der Rohe said, “God is in the details.” With that in mind, special shout outs must go to Jermaine Rowe and Michael Scott Gomez, who, among other roles, played the Horses for Don Quixote and Sancho Panza. Their characterizations were spot-on and it is these types of details that ultimately lead to the overall verisimilitude of the play.

To say that Mark Lamos did a great job of directing the book by Dale Wasserman would be greatly underplaying the strength of the direction as well as being an insult to Mr. Lamos. He did a fantastic job of breathing new life and new meaning into a play that has been around for a long time. The scenic design by Wilson Chin was knock-down-drag-out superb as was the musical direction by Andrew David Sotomayor.

Westport’s version of Man of La Mancha is more than just a fabulous revival of a musical. It is a portal, a mirror if you will, and a metaphor for how we should see the world as it is supposed to be rather than simply seeing it as it is and being passively apathetic.