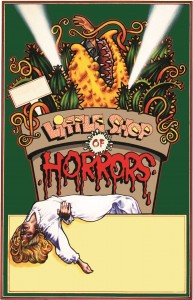 I’d had the cognitive itch “Feed Me Seymour” running through my temporal lobe for weeks since receiving the invitation to review The Windham Theatre Guild’s production of Little Shop of Horrors, with book and lyrics by Howard Ashman and music by Alan Menken. This phenomenon, also known as an earworm or a phonological loop, is one that usually strikes my husband/co-reviewer (and much to my chagrin, he often incessantly sings – off-key, I might add – a plethora of show tunes both before and after the musicals we review). In any case, I’d never seen Little Shop on the boards before, although I’d seen the 1986 film remake starring Rick Moranis, Ellen Greene, and Steve Martin several times and loved it. I was eager to see how the fantastical elements might be handled in live theatre as well as how different the two versions might be.

So unless you yourself are from another planet, you must know that Little Shop is a sidesplittingly funny, farcical confection (originally based upon the 1960 Roger Corman black comedy film) about a ginormous, loquacious, and insatiable man-eating plant who really is from outer space and who has plans to take over the world. This cult classic deemed a “horror comedy rock musical” was breathed new life in Connecticut under the sure-handed direction of Victor Funderburk with a cast who were doubly endowed with great vocal pipes and spot-on acting chops. But the real star (sorry to the flesh-and-blood, two-legged others), “Audrey II,” is a feast for the eyes – pun intended. The puppets (plural, as “she” grows in size), created by Susan Betz, Derrick Mantie, and Linda Worthington-Valdes, quite literally devour the audience as well as her costars. 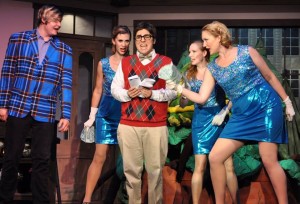 Nerdy, incompetent, well-meaning Seymour Krelborn (Jason Phillips) can’t seem to please his gruff boss, flailing floral shop owner Mr. Mushnik (Steve Ossias), or get the girl, Audrey (Kathleen Narowski). Like Bill Murray in Groundhog Day, he’s just plodding through a boring, empty, day-by-day existence on Skid Row until something unexpected changes his life dramatically. While buying flowers in the wholesale flower district, he comes upon a unique and as-yet unidentified plant that appears after a solar eclipse. He’s compelled to bring the plant he’s dubbed Audrey II back to the shop, but try as he might, he’s unable to make it thrive. When he accidentally pricks his finger on a rose thorn, he realizes what it needs is blood – human blood.

Suddenly all of Seymour’s troubles seem to dissipate as the public learns about Audrey II (who is growing in leaps and bounds) and they begin making purchases while frequenting the shop to view this monster sideshow attraction. But like selling one’s soul to the devil, success comes with a price – and for Seymour it is a moral one. In the meantime, Seymour just may get the girl – that is if he can turn her head away from her nitrous oxide-addicted, sadistic dentist boyfriend Orin Scrivello (Addison Beck) – and avoid legal investigation.

With a plethora of quirky, witty, well-sung tunes, a terrific set depicting Mushnik’s Flower Shop and the surrounding area of Skid Row, and a fine troupe of actors, The Windham Theatre Guild hits this one out of the park. Funderburk brought the perfect amount of campiness and charm to this beloved piece.

Phillips is a terrific, uber-nice guy Seymour, bringing the ideal blend of naiveté and charm (and low self-esteem) to the role. Narowski nails the sweet, vulnerable Audrey to a “T” – she is the doppelganger to Ellen Greene’s film version and has an incredible vocal range. Ossias is a spot-on Mr. Mushnik, the grousing, grumbling grouch. And Beck maximizes the laugh quotient when he not only nails Orin, but also trounces across the stage in multiple roles (as well as in a dress), credited as Bernstein, Snip, Luce, and “Everyone Else.” The four leads are a knock-out combination.

And last but certainly not least is Audrey II – voiced by Thayer Kitchen and maneuvered by puppeteer James Ryan. This vibrant, hungry show-stopper and scene-stealer eats up half of the stage by Act II along with a number of the show’s main characters. Her construction is fabulous and Kitchen is perfection as the deep, soulful singing and speaking voice of the plant. He is equal parts charming, funky, manipulative, and sinister.

The lyrics are sharp and downright hysterical and there isn’t a dud in the song list, but special mention of course must go to “Feed Me” by Seymour and Audrey II, as well as “Somewhere That’s Green” by Audrey and “Suddenly Seymour” by Seymour and Audrey. Credit to Robert Billing for vocal arrangements and orchestrations by Robby Menken. Excellent musical direction is led by Ken Clark with an incredible in-house orchestra – Jim Wheeler on bass, David Keplesky on drums, and Clark on piano. Kudos to Thomas Beebe as choreographer.

Little Shop of Horrors won’t be on this planet (or at least in Willimantic, CT) for long, so buy a ticket and firmly plant yourself at the Burton Leavitt Theatre (sorry, couldn’t resist) for a rousingly good time!

I became an Audrey II fan after watching a low budget 1960 comedy/horror film titled Little Shop of Horrors directed by B-movie king, Roger Corman. What I remember most about the blurry, black-and-white version was not only the man-eating (or to be politically correct today person-eating) alien plant named Audrey II, but an actor who was hilarious as a sadomasochist who actually enjoyed going to the dentist. That actor was none other than the great Jack Nicholson.

The tiny film spawned another film version (with a bigger budget) and a musical theatre version which played on The Great White Way. With respect to the theatrical version, Alan Menken did the music with book and lyrics by Howard Ashman.

I have seen the 1986 film version and several other theatrical versions since then including the Broadway production. It remains one of my all-time favorite films (both the 1960 and the 1986 version with Rick Moranis) and musical theatre productions. I am happy to report that The Windham Theatre Guild’s production of Little Shop ranks up there with some of the best versions I’ve seen. Everything works in the production from the casting down to the props.

If you have been living on another planet since the sixties (maybe on the same planet where Audrey II came from) and never heard of Little Shop, the plot is the following: An alien plant – what one commentary suggested was a cross between a Venus flytrap and an avocado – lands on earth and falls into the hands of a florist’s assistant, Seymour. Seymour, a kind of bumbling but endearing nebbishy guy, uses the strange plant to attract customers. Fame, fortune and even love soon follow – but at a terrible price. It seems the plant, which Seymour dubs the Audrey II after his main squeeze, has a very narrow palette – human blood. In order to keep his new found status, Seymour must feed the ever-hungry Audrey II. 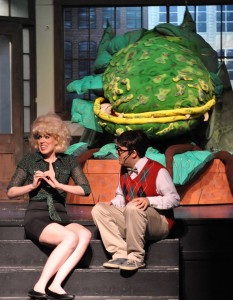 Kathleen Narowski, whose performance I saw as Lucy T. Slut in Chestnut Street Playhouse’s Avenue Q, was wonderful as Audrey. But Ms. Narowski was more than just a clone or caricature. Her performance was a stand-out and she owned the character, making it a real live flesh-and-blood creation (which is exactly why Audrey II wanted to devour her). Jason Phillips was spot-on as the nebbishy Seymour. Like Ms. Narowki’s performance, Mr. Phillips’ characterization of Seymour transcends a mere movie imitation of Moranis’ performance to become a viable performance on its own. Steve Ossias made a great Mushnik, the proprietor of the flower shop. Nods to the female singing trio that adorned the sides of the set and narrated some of the action through song – respectively, Chelsea Cottle (Chiffon); Elizabeth Noble (Crystal); and Meg Clifton (Ronette). Shout-outs also must go to James Ryan, the Audrey II puppeteer, and Thayer Kitchen who was the voice of Audrey II. Last and certainly not least, a special shout-out to Addison Beck who played the sadistic dentist Orin, Bernstein, Snip, Luce and Everyone Else (really – that’s how it’s listed in the program).

Kudos to the three musicians who made it seem like there was a full orchestra backing the production: Jim Wheeler (bass); David Keplesky (drums); and Ken Clark (piano) who also served as the Musical Director.

Director Victor Funderburk did a great job not only with the staging and blocking but with eliciting from the actors the comedic timing and tone of the original productions. Even though I’m a Little Shop veteran, this production made me laugh. As an added bonus, much to the chagrin of my wife and co-reviewer, I sang a bastardized version of “Suddenly Seymour” in the car ride home.

What also was a nice surprise about this production was the attention to details – great set design (thank you, Victor Funderburk, Tricia Hul, Jack Nardi) and great props (thank you Susan Figueroa, Michele Hettinger and Dawn Riquier-Shayer). I also must point out that there was a clock on the back wall of the set that actually tracked real time in the play! It’s the attention to those sorts of details in theater which help to keep the audience ensconced in the illusion of reality.

It is a given that the success of any production of Little Shop of Horrors rests on good casting and good orchestrations. But Little Shop, as a theatrical production, needs an additional element: a believable progression of Audrey IIs. Windham’s production line of Audrey II fits the bill. You can judge for yourself below. Final shout outs to Audrey II puppet designers Susan Betz, Derrick Mantle, and Linda Worthington-Valdes.

Thank you Windham for bringing this delightful piece of great theatre to the community! 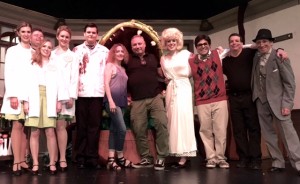