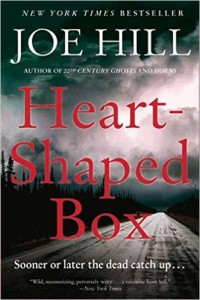 Those of you mere mortals who have read my Rippersmooth review of Joe Hill’s NOS4A2 know that I thought it was a sick read and I found it horrifyingly satisfying – all this despite the fact that he stole my email name for his title (my email is IMNOS4A2@gmail.com – no more death threats please – I’ve been to Hades enough times this year via the river Styx.) Comparing his style of writing to his old man, the King of Horror (Stephen King), I found that the blade of the guillotine doesn’t fall that far from its perch. As I noted in my review of NOS4A2, “If I were doing the Coke/Pepsi taste challenge and adapting it to the King family, I would be hard pressed to say who wrote what given an anonymous piece of writing by each.”

Curiosity is the unacknowledged eighth deadly sin and it certainly is responsible for more than the death of the proverbial cat. So curiosity tickled my decaying and rotten insides until I was compelled to go back and read Joe Hill’s first novel, Heart-Shaped Box. If there was an evolution from sick to sicker vis-à-vis horror fiction, I wanted to trace it for myself.

And sew up my mouth with undertaker stitches, but I did find a distinct evolution – though not in style, but rather in complexity and verbosity. Heart-Shaped Box was a rather simple tale compared to the much longer, more loquacious, multi-layered NOS4A2 with its multiple cast of characters, subplots and time period flip-flops. A logline or one-sentence pitch for it could be “Aging rock star and goth gal-pal are haunted and stalked by psychotic ghost.”

Don’t get me wrong, it’s not that it wasn’t a sick, terrifying yarn. In many ways, its simplicity enhanced the overall horror of the story. No, it was not a Jasonian epic of the level of something like The Shining or even Hill’s own NOS4A2. But that’s okay – sometimes less is more – especially in the horror field. In many ways, Heart-Shaped Box could have worked just as well as a novella, but it would have needed a Rippersmooth content editor that was good with a blade. Indeed, he or she or – it – would have had to cut the narrative until it bled.

I could visualize Heart-Shaped Box working as a down-and-dirty, low-budget flick rather than as a bloated studio piece with a top-heavy, above-the-line budget with superfluous CGI. Think Sam Raimi’s original The Evil Dead; Don Coscarelli’s Phantasm or (one of my favorites) Bubba Ho-Tep; the seventies’ iconic Race with the Devil with Peter Fonda and Warren Oates; or the more recent sicko flick Drive Angry with Nicholas Cage.

There are the same thematic elements in Heart-Shaped Box that also are found in NOS4A2 (ones he seems to have inherited from dear old dad): e.g., the dead claim their own; karmic retribution is alive and well; rock stars wield a considerable amount of power whether it’s in this world or in the dead zone; and dogs can be your best friend or your worst enemy depending on their use as a plot device. Like NOS4A2, while Hill’s writing style is definitely similar to his father’s, he tends to be more graphic at times and willing to jump the shark more often.

All in all, Heart-Shaped Box is a Rippersmooth first novel from the new heir apparent to the King of Horror.