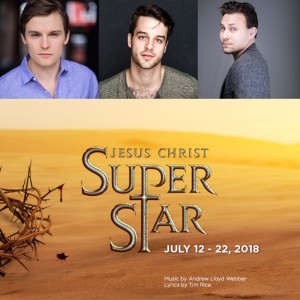 I could write absolutely nothing about Connecticut Repertory Theatre’s (CRT) Jesus Christ Superstar and that could illustrate precisely how I felt at the final curtain, but I know that would give readers of this review the entirely wrong impression. That’s because what I endeavor to express is that this powerful, affecting, incredibly executed rock opera left me utterly speechless. I would not be exaggerating to say I was blown away. Every element of the gestalt was staggering perfection and it’s now my gold standard for this Andrew Lloyd Webber-Tim Rice work.

I will say at the outset I’m not a religious person, nor am I an avid historian; but that doesn’t mean I am unfamiliar with the protagonist or many aspects of his storied existence. That aside, and whether you are an ardent Christian or not, you cannot experience a production like Jesus Christ Superstar without feeling the intensity and the weight of the man and his life.

Directed by the one-and-only Terrence Mann and choreographed by the incredible Christopher D’Amboise, Jesus Christ Superstar is riveting. From top-notch acting and singing to seamless staging; from flawless choreography to incredible music; from striking sets and lighting to effective sound design, there is precision and brilliance from beginning to end. It cannot be said enough, and as I do in many of my reviews, if you’ve never experienced CRT, you must. The pairing of seasoned guest performers with earnest, equally talented students is sensational, and the line between professional is pupil is undetectable.

Jesus Christ Superstar follows Jesus through his last days prior to his crucifixion. A story told entirely in song, it cleverly juxtaposes the year 30 AD with the 1970s, when the show was created. It delves into the psychology of the characters and the relationships among them. If the chatter on the way out of the theatre was any indication, this production leaves a heavy impression (but one side note, it is not for young children – one small child was so affected by Jesus’s bloody flogging, his mother had to escort him from the theatre). 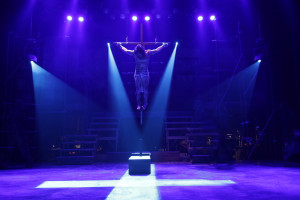 Mann’s vision is seamlessly executed as he directs the model cast. Alex Prakken as Jesus is flawless; you feel everything he experiences and it truly goes rocks you to your core. His chemistry with Ryan Vona as Judas brings you to your knees (as it often does them as well). Sasha Rene Brown’s portrayal of Mary Magdalene is stunning – a moving, heartrending performance. Jonathan Cobrda as Pontius Pilate is incredible, disturbing, and impactful. Tyler Grigsby is formidable as Caiaphas as is Bryan Mittelstadt as Annas. Also outstanding are the performances by Griffin Binnicker as King Herod, Simon Longnight as Simon Zealots (also Ensemble), and Will Bryant as Peter (also Ensemble). And finally, the brilliant Ensemble – Jamie Colburn, Madeline Dunn, Michael Katz, Nick Nudler, Jovick Pavajeau-Orostegui, Hayden Elizabeth Price, Annelise Henry, Paige Smith, and Alessandro Viviano.

If you’ve never seen Jesus Christ Superstar, this is the one to see. And if you have, I imagine like for me, this also will become your gold standard.

I always seem to date myself in my reviews, but here I go again. I remember the vinyl Jesus Christ Superstar with Yvonne Elliman singing one of my all-time faves “I Don’t Know How to Love Him.” The album (do they still use that word?) came out before the play and set in motion a storm of controversy. No matter whether you believed that the Jesus was the Son of God or not, to take a religious and historical icon and turn him into a pop culture phenomenon was blasphemous to some, sacrilege to others, and genius marketing to others. By the time the Broadway version came out, casting Ben Vereen as Judas, and “loosely” basing the play on the last week of Jesus’s life, the critics were sharpening the nibs on their fountain pens. Even Andrew Lloyd Webber himself said he was unhappy with the production. It would be like taking a religious group – like the Mormons – and making fun of it. Or worse yet, taking historical personages like John Adams and George Washington and making them rap stars.

How far we have come!

Connecticut Repertory Theatre’s (CRT) production of Jesus Christ Superstar directed by Terrence Mann has proven the test of time. The play is still a powerful, intense, thought-provoking exploration into relationships rather than religion or historical fact. Indeed, the play really centers on the relationship between Jesus and Judas and, in doing so, focuses on the humanity of each character: their fears, doubts and love.

As one would expect, Terrence Mann’s direction is masterful. It’s humbling to think that Mann can simultaneously play the lead in Sweeney Todd and direct a full-on Broadway caliber production in ten days. Kudos also must go to Choreographer Christopher d’Amboise whose opening number was a show stopper itself.

The casting was superb. As is customary, CRT uses a handful of seasoned Equity performers who work with and alongside some of the most talented newcomers to the business. Alex Prakken gives a layered performance as Jesus and hang notes in the air like professional sky divers. The commanding stage presence of Ryan Vona as Judas serves as a perfect foil to Prakken’s portrayal. Even as the critics noted back in the 70s, this is as much a story about Judas as it is about Jesus.

Sash Renae Brown was wonderful. When she sang “I Don’t Know How to Love Him” I had goosebumps. Jonathan Cobrda showed his acting chops and range as he went from the comedic minion Smee when Pillow talking saw him in CRT’s Peter and the Star Catcher to the much-maligned Pontius Pilate. Shout outs also must go to Tyler Grigsby (Caiaphas) who actually had a bigger voice than his headdress; Griffin Binnicker (King Herod); Bryan Mittlelstandt (Annas); the versatile Simon Longnight (Simon Zealots); and the always dependable Will Bryant (Peter).

A show – or rather a rock opera with few if any lines of dialogue – must have a strong Ensemble of triple threats to pull it off. Fortunately, CRT’s production has – one of the strongest that I’ve seen at CRT besides Newsies. So here are individual props to James Colburn, Madeline Dunn, Michael Katz, Nick Nudler, Jovick Pavajeau-Orostegui, Hayden Elizabeth Price, Annelise Henry, Paige Smith, Alessandro Viviano.

While CRT’s production of Jesus Christ Superstar may not have any impact on your religious beliefs, it definitely will convince you that live, powerful, stimulating theatre is, in itself, a type of religious experience.