Pillow Talking’s Review of INTO THE WOODS at Richter 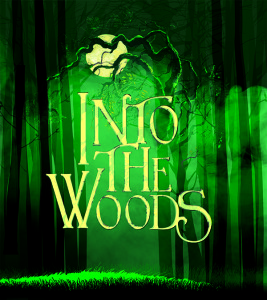 Destiny has two ways of crushing us – by refusing our wishes and by fulfilling them.  – Henri Frederic Amiel, Swiss philosopher, poet, and critic.

For an enchanted evening right out of a fairy tale story, pack up your basket of goodies, toss on your cape, and cheerfully skip your way into the woods – just be sure to avoid deceitful, hungry wolves or malevolent, spell-casting witches. If you’re concerned about the latter, however, instead you may simply pick up some tasty takeout, grab a cozy blanket, and head on over to Into the Woods on the stage of the Musicals at Richter. Mosquitoes be darned, this production is pure delight for those 4 to 104 (you may want to bring along your citronella or bug spray, just to be safe!).

Musicals at Richter is Connecticut’s longest running outdoor theatre, nestled behind the Richter Arts Center at Richter Park Golf Course. And while their center stage has been home to over 80 productions, it is the perfect backdrop for this kooky, far-away kingdom and all of the merriment brought to life by the zany melding of tales told by the Brothers Grimm and Charles Perrault. With book by James Lapine and music and lyrics by Stephen Sondheim, Richter’s production is skillfully directed and choreographed by Bradford Blake with fine musical direction by Daniel Michael Koch.

Wishes, wishes, and more wishes. Everyone has them – and everyone sets about to fulfill them. The Baker and his wife yearn for a baby; Cinderella wants to go to the King’s festival (the ball); Jack (of the Beanstalk) implores his cow and best friend (yes, that’s odd!), Milky-White, to give milk. Further, Little Red Riding Hood wishes for treats for her visit to Grandma’s; Jack’s mother needs money for food; Rapunzel desires a life outside of her tower; Cinderella’s stepmother wishes for her daughters to marry. What happens next is a madcap fusion of fairy tales that aren’t nearly the ones your parents may have read to you (or you might have had nightmares)!

It is tragicomedy at its finest – because when anyone actually gets what they want, it’s not all it’s cracked up to be. Love leads to disillusionment and loss, often through death; happiness to unhappiness. Arguments, blame, anxiety, fear, and even a little extra-marital hanky panky are not exactly in the ingredient list for a solid “Happily Ever After” are they? (Then again, they might be part of a witches brew, but I don’t happen to own a spell book so I can’t say.) Nevertheless, as in the tall tales of your childhood, you will see red capes, golden harps, magic beans, golden hair several yardsticks long, princes, and lost slippers. You also will learn of consequences and of lessons learned and ultimately you may just see some characters in an entirely different way.

This excellent ensemble really nailed the production and all of the many nuances of each character’s individual story as well as all of the overlapping and interwoven elements, playing off of one another like true professionals. There truly were no small parts. Patrick Spaulding was hysterically fully as the impish Mysterious Man who skittered across the stage periodically with sidesplitting agility (he also doubles as a Narrator). Will Armstrong as puppeteer for Milky-White (and a Narrator) was terrific as the sad, milk-less creature. Rob Mayette was excellent as Cinderella’s Father and Narrator. Brian Hinger did a fine job as the surly Steward (doubling also as a Narrator). Catherine Cavendar was lovely as Cinderella’s advice-giving mother (and a Narrator) as was Juliana Koziol as Red Riding Hood’s feisty grandmother (who tripled as a Narrator and the angry Giant). Daisy Stott and Rachel Salvador were excellent in their triple roles of Narrators, Birds (those pesky eye peckers), as well as Sleeping Beauty and Snow White, respectively.

Betsy Simpson demonstrated exceptional vocal ability as well as spot-on acting chops as the loving and kind Cinderella who gets her prince – but will life for her be everything she wishes once she gets it? Nathan Mandracchia as the Baker is the story’s main protagonist and determined and loyal (albeit idealist) hero. Songbird Carey Van Hollen is pure delight as the gutsy Baker’s wife and her husband’s more assertive counterpart; she’s desperate to have a child and will let nothing stop her from having her dream. Tyler Carey is excellent as Jack, the young and foolish (read: clueless) boy who still has a lot to learn. Beth Bria Salvador channels the classic evil fairytale stepmonsters as Cinderella’s greedy and cruel stepmother. Emma Giorgio and Natalie Harde are spot-on as Lucinda and Florinda, Cinderella’s equally cruel stepsisters (I guess they get what’s coming to them as they lose parts of their feet). Priscilla Squiers shines as the jaded mother to Jack, who can’t hold back her obvious frustration with her son’s endless ineptitude.

Tori Vacca as Little Red Riding Hood is sassy and she brings an effortless vibrancy to this fun role. Tracey Marble is a screamingly funny witch – the show’s main antagonist whose vanity is at the crux of everyone’s issues; she’s at the same time both charismatic and twisted. Lovely Cassandra Bielmeier plays the loopy Rapunzel to the hilt – losing her childhood (locked away in a tower) and her hair has caused her to come completely unglued! Sergio Mandujano as Cinderella’s Prince (and a Wolf) and Stephen Moores as Rapunzel’s Prince (and a Wolf) were beyond riotous, amusingly melodramatic, and stole scenes every time they took the stage (wait until you catch “Hello, Little Girl” and “Agony”).

The fine company wowed on stage while the production staff wowed behind the scenes – and pulling off a musical with a cast this size, outdoors no less, is no easy feat. Bradford Blake guided all with a sure hand and shout outs to Joyce Northrop as Producer. Kudos also to Jake McGuire for technical direction, set design, and lighting design; to Will Armstrong as Tech Assistant; Blake and Jessica Rehaag as Scenic Artists; RKE Productions and Sierra Cervantes for sound design (and Cervantes for board operation). Hands also to Jose Alves as Booth Coordinator; Lauren Nicole Sherwood as Costume Coordinator (DB Productions and DivaStar Productions for costume rental); to Northrop as Seamstress; Victoria Meskill for props; as well as the many other hands that went into this pie.

As a nearly lifelong Danburian, I’m proud to say we have theatre of this quality in our community. Bravo to Musicals at Richter for another fine production!

All the world’s a stage.  — William Shakespeare

There is something magical about seeing theatre outdoors, bugs and weather notwithstanding. I am old enough to remember the drive-in movies of yesteryear and the excitement of watching a film against the background of stars and hearing every third word clearly. Maybe attending outdoor theatre venues triggers some synaptic response evolved from the collective unconsciousness of humankind when large open air amphitheaters like the Colosseum or the Circus Maximus provided entertainment for the masses. Whatever the reason, I was excited when Pillow Talking was invited to see Musicals at Richter’s first production of the season, Into the Woods.

Let me say right up front, I’m not a fairy tale guy. I found grim the Grimm Brothers’ fairy tales (pun intended). Which is why I enjoyed Into the Woods. For the same reasons that I enjoyed Shrek, Into the Woods takes our beloved fairy tale characters and puts an entirely different and hilarious spin on them so that little of the original fables remain. Which also is the reason why I especially love the second act of Into the Woods – not that the first act wasn’t enjoyable. But it’s nice to pull back the curtain and see [how John Lennon once said) “Life is what happens to [the happily ever after] while [the fairy tale characters] are busy making other plans.” 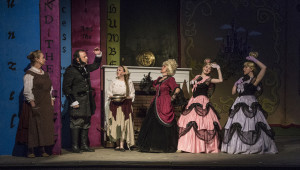 Richter’s Into the Woods was thoroughly enjoyable and entertaining. The casting and acting were both solid as concrete. Indeed, the entire cast was excellent. While it would be too lengthy to individually comment on each actor’s performance, there were some standouts that should be noted. Tracey Marble played the perfect witch (in a good way). I certainly wouldn’t want to bump into her in a dark alley, especially after seeing how she wielded that magic staff of hers. Cinderella’s Prince played by Sergio Mandujano and Rapunzel’s Prince played by Stephen Moores were both Prince Charmings on stage. My favorite musical numbers in the show were (from past productions) and still are “Agony” and its reprise. Although the Wolves were not credited, I am fairly certain that Messrs. Mandujano and Moores doubled as them. Both Wolves were absolute scene stealers. I enjoyed Tori Vacca’s 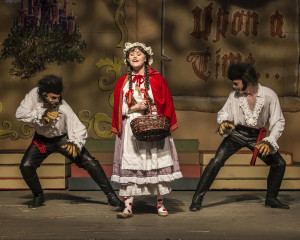 switchblade wielding take on Little Red Riding Hood, thinking she would make a great Anybodys in West Side Story. Nathan Mandracchia and Carey Van Hollen were perfectly paired as the Baker and the Baker’s Wife. Similarly, Cinderella played by Betsy Simpson and Rapunzel played by Cassandra Bielmeier made a fine pair of princesses, both with nice arcs to their characters. The last of the two actors paired together that should be mentioned for their worthy performances are Tyler Carey who played Jack and Priscilla Squiers who played his mother. Shout outs also must go to the hilariously colorful threesome of the play, Beth Bria Salvador (as the wicked stepmother) and her daughters Lucinda and Florinda played respectively by Emma Giorgio and Natale Harde (whose performances channeled the “The Three Blind Mice”). Rounding out this talented cast were the Narrators who doubled as other characters including: Patrick Spaulding (Mysterious Man), Will Armstrong (Milky White). Rob Mayette (Cinderella’s Father), Catherine Cavender (Cinderella’s Mother), Juliana Koziol (Granny/Giant), Brian Hinger (Steward), Rachel Salvador (Snow White), and Daisy Stott (Sleeping Beauty).

Into the Woods is not by any stretch of the imagination an easy musical to tackle. However, this production was in the capable directorial hands of Bradford Blake (who also did the choreography). In addition to being the Founding Artistic Director of Musicals at Richter, his work as a director, choreographer, playwright, lyricist and composer has been widely acclaimed and enjoyed by countless audiences over the years. Daniel Michael Koch did yeoman’s work as the Musical Director as did the entire orchestra.

Although it was a minimalist set in terms of scenery and set pieces, the breadth of the level stage, the blocking, staging, and choreography all made the production work as a whole. The audio was surprisingly clear and audible for an outdoor venue (thank you Sierra Cervantes, Sound Design and Sound Board Operator). How far we have come from those squeaky drive-in speakers.

So pack bug spray, food and drinks and head to Richter to see some authentic and genuine outdoor theatre and you may just live happily ever after…or not.