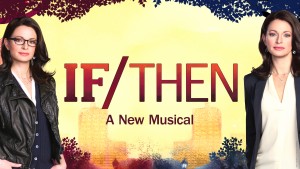 Counterfactual thoughts. These are mental representations that people often construct of possible alternatives to past life choices and events. Simply stated, they are the what-might-have-beens and the if-onlys. We ask ourselves, “What IF I had done this?” / “THEN that may have occurred.” For most of us who are living in the practical, rational world, we can neither accurately predict all that may transpire, nor go back to change our life trajectories; we only can entertain the possibilities (and very often we drive ourselves crazy in the process). But the 2014 Broadway musical which hit Hartford’s The Bushnell for a stop on its national tour leads us down those divergent paths by illustrating what would happen in each of two parallels in the life of its protagonist, Elizabeth.

A few years ago, I had the supreme delight in seeing IF/THEN on Broadway with superstar Idina Menzel. So one might ask, what IF the role of Elizabeth is now played by someone else – Menzel’s Broadway standby and now-successor? I can say resoundingly, THEN you have as top-notch a production with a phenomenal lead in powerhouse singer/actress Jackie Burns. In fact, from our seats (in row “S”) you might not even realize it it’s not the same person. Burns is nearly her physical doppelganger and her vocals were most assuredly on par with the inimitable Menzel. 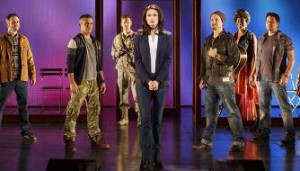 At the outset, I recommend that it’s a good idea to have the low-down on the major plot points – and I say this because at both the Broadway and the Bushnell shows, I’ve had nearby audience members express confusion (and do a good deal of talking to their seatmates during the productions in an effort to understand what was happening). But once the matter becomes clear, it’s an enjoyably voyeuristic ride, seeing how Elizabeth’s life will twist and turn depending upon one simple decision – a choice which comes early in Act 1. With a taut, witty, and sometimes downright snarky book and lyrics by Brian Yorkey and music by Tom Kitt (take for example, the song “What the F*@k?”), IF/THEN is a layered exploration into love, friendship, career, fulfillment, and choices, as well as deeper quests into the quantum multiverse and fate.

Thirty-eight-year-old, slightly neurotic Elizabeth has returned to New York City after a failed marriage. She meets up with friends in a nearby park but her roads diverge when she either chooses to take a phone call or she doesn’t. We come to know Elizabeth as both “Beth” – a go-getter who eventually takes a job with an old colleague as an urban planner and works her way up the career ladder; or as “Liz” – a college professor who is doggedly pursued by and eventually dates an Army doctor who has just returned from his second tour of duty.  Both Beth and Liz are strong, determined women – but the twists of fate leave one single and wanting, the other married and wanting, for entirely different reasons. 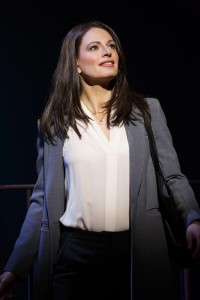 Director Michael Grief used a sure hand in taking his stellar cast through the separate narratives on this emotional roller coaster ride of life. Jackie Burns is mesmerizing as she fully embodies and embraces this/these role(s). Her voice soars into the stratosphere as she can hang notes for what seems like indefinitely. She shifts seamlessly from Liz to Beth and back again, slipping on Liz’s glasses, or stowing them away for the next changeup as Beth. Her political activist, gay best friend/lover Lucas (depending upon Elizabeth’s trajectory) played by Anthony Rapp is phenomenal. We saw him on Broadway, and like fine wine, he has just has gotten better and better over time (and countless performances). Lucas pulls no punches, always telling Liz/Beth exactly how he feels with his characteristically biting edge. Matthew Hydzik is warm and genuine as Josh, the Army doc who is every woman’s dream as the supportive and loving partner. Tamyra Gray as Kate is smashing and has a stellar voice (which was a delight to hear, as many will remember her as the fourth-place finalist in the first season of American Idol); she is a quirky, buoyant force-to-be-reckoned-with as the best friend Liz/Beth just met.

Janine DiVita is Anne, Kate’s girlfriend whom she eventually marries in both scenarios; DiVita and Gray have wonderful chemistry and play off one another well. Elizabeth’s colleague Stephen played by Jacques C. Smith is excellent as is Marc Delacruz as David, Lucas’ boyfriend and later husband. The entire ensemble is comprised of triple-threats (actors, singers, and dancers) who play multiple roles. They include: Kyra Faith as Elena and others; Corey Greenan as Deputy Mayor, An Architect, and others; lifton Hall as A Bartender and others; Xavier Cano as A Soldier and others; Alicia Taylor Tomasko as A Flight Attendant and others; Tyler McGee as A Street Musician and others; English Bernhardt as Paulette and others; and Deedee Magno Hall as Cathy and others.

The simple but dynamic sets provided the perfect urban tone and feel of New York City and I especially loved the revolving center stage (design by Mark Wendland) as well as the backdrop projections which provided maps and other elements of the Big Apple cityscape (design by Peter Nigrini and Dan Scully).  Emily Rebholz did a terrific job with hip, urban costume design. Shout outs to Kenneth Posner for lighting, Brian Ronan for sound, David Brian Brown for wig and hair, Annmarie Milazzo for vocal arrangement, Michael Keller for music coordination, Michael Starobin for orchestrations, Carmel Dean for music supervision, and Larry Keigwin for choreography (with Mark Myars as associate choreographer).

While we all may ponder and pause along life’s journey, IF/THEN is about having faith and just taking a leap, because Elizabeth (like the rest of us) cannot ever know what lies ahead. Despite her choices, will she ultimately find herself on the path where she’s destined to be? Will fate play a hand? IF/THEN is a dynamic and engaging illustration of life’s many twists, turns, successes, and disappointments – it’s a must-see, and for me, this was a choice in which I most assuredly was not disappointed.

The theatrical conceit of quantum multi-universe theory is by no means sui generis as the recent play Constellations by Nick Payne points out. Constellations, however, is a fifty-nine-minute drama. IF/THEN is a two-hour musical extravaganza; two rather structural polar opposites that deal with some of the same subject matter. Both plays are a quantum physicist’s dream. There’s a theory in quantum physics that for each decision you make, two parallel universes spin off and continue simultaneously. 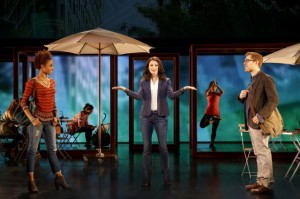 In the case of the IF/THEN, the two parallel universes center on Elizabeth. Newly divorced after a twelve-year marriage, she moves back to the East Coast to start her life anew. She goes to a park in NYC to meet an old ex-boyfriend/friend, Lucas, and Kate, a new friend. With whom she will go with determines her destiny. If she goes with Lucas, a chain of events will be set in motion leading her into a career in business and government. If she goes with her new friend Kate, she meets a man and goes down as the wife of a doctor and mother. She is known as Liz in the Kate universe and wears a Clark Kent pair of nondescript glasses; and as Beth in the Lucas universe without glasses. It admittedly is a rather flimsy affectation, but it does let the audience know, for the most part, in which world she is at any given moment.

IF/THEN was written by Brian Yorkey with music by Tom Kitt. I had seen IF/THEN on Broadway with my wife and co-reviewer. Idina Menzel was starring in it and other than a rather long first act, I thought the Broadway version was wonderful. I feel the same about the National Tour. Even sans Idina, the production was fantastic. In fact, several of the Broadway actors continued their roles in the tour. The sets, staging, blocking, and pacing all replicate to a “T” the Broadway version (as many National Tours do). In fact, if I didn’t know I was sitting at Bushnell theatre in Connecticut, with the exception of a couple of Republican jokes, I’d swear I was on the Great White Way.

The casting was dead-on. Jackie Burns was terrific as Elizabeth. She has a voice to-die-for and can hang notes in the air longer than champion hang gliders. Somewhat to my chagrin, since I am a huge Idina Menzel fan, I must confess that Ms. Burns’ performance rivaled that of Idina and if I were to close my eyes I would not be able to tell the difference between Memorex and the real thing. I have “Always Starting Over” on my Spotify playlist and listen to it all the time and Ms. Burns’ version was pitch-perfect and brought down the house.

Anthony Rapp who played Lucas gave the same stellar performance he did on Broadway. Matthew Hydzik as Josh, Liz’s love interest, played the charismatic war veteran/Nebraska farm boy/doctor (talk about a catch) to the hilt. Tamyra Gray who is still recognized from her American Idol performance is simply fab as Liz’s friend, Kate. Rounding out the talented principal cast was Janine DiVita (Anne), Jacques C. Smith (Stephen) and Marc Delacruz (David) who did double-duty as Dance Captain as well.

Director Michael Greif did a masterful job of replicating the staging, blocking, and pacing of Broadway.

IF/THEN works on several levels. It works as pure entertainment as well as a feast for the senses. The  music, singing, and dancing are terrific (thank you Michael Starobin for Orchestrations, Music Supervisor Carmel Dean, and Choreographer Larry Keigwin). But, like Constellations, it works on a deeper, intellectual level where we can live vicariously and experience the full impact of the “what if” scenarios as each consequence is played out on the boards.

My recommendation?  Don’t wait to see IF/THEN in a parallel universe. See it in this one!