Someday Productions LLC and Pillow Talking are pleased to present the following review of HARVEY at the Elmwood Playhouse, Nyack, NY 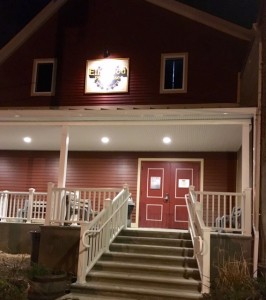 Nestled between buildings in a commercial section of Nyack, NY is the Elmwood Community Playhouse.  It has been there, like a pearl in an oyster, able to delight all who happen upon it and open its shell – I mean door.  It has been serving the cultural and artistic needs of the community for 67 years.

When I heard that the 1945 Pulitzer Prize-winning play Harvey was going to be performed there, I was ecstatic.  Harvey has been one of my favorite plays since I caught a dress rehearsal for it in my high school auditorium during study hall.  It convinced me to try out for theatre the following year.  The iconic 1950 film version starring James Stewart still resonates with me.

The playwright, Mary Chase, wanted people to find ways to laugh again after WWII, and she certainly succeeded with her play about a man who sees a pooka (described in Irish mythology as a magical shapeshifter) in the form of a six-foot rabbit named Harvey (much to the chagrin of his upper-crusted, societal-minded family).

I am happy to say that Elmwood’s version of Harvey does justice to the play’s pedigree and legacy. This is certainly 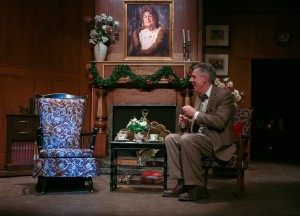 due in part to an excellent cast. Andrew Greenway is perfect as Elwood P. Dowd, the man whose best friend is an invisible rabbit. I expected a caricature of Jimmy Stewart, but Greenway made it his own; his big, wide, blue eyes gleaming like those of an innocent child’s throughout the play. (At the opening night party, we were informed by Mr. Greenway that his model for the role was Fred Rogers – and that made perfect sense.) Veteran actress Meg Sewell was a perfect complement to Greenway as Elwood’s loving but torn sister, Veta Louise Simmons; her prior studies with Uta Hagen were not wasted.  Kimberlyn Frost as Myrtle Mae Simmons, the wannabe debutante, achieved the perfect balance between self-absorption and man-craziness. Steve Bermack as the bumbling but charming Dr. Lyman Sanderson knew how to work the audience, milking it for additional laughs merely by bobbing his eyebrows (he 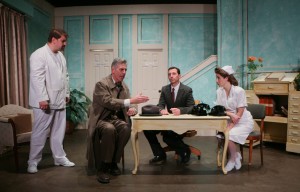 reminded me of a young Ken Berry or a Bob Saget). His secret/not-so-secret admirer, Nurse Ruth Kelly, is played with verve by Ann Marie Goulding. Greg Schilero (Judge Gaffney) and Gordon Wolotira (Dr. Chumley) make the perfect point-counterpoint backbiting professionals representing law and medicine (there is some great blocking where they spew their lines at one another as they pace back and forth). Jesse White who played Wilson in the 1950’s film version, the stage version and the 1972 version (and was the Maytag salesman in commercials for years) would have been damn proud of Edward Van Saders’ portrayal of Wilson, the gruff but loyal orderly at the sanitarium. I almost didn’t recognize Mr. Van Sader at the after party – his real persona, refined and soft spoken, was so different from the character he portrayed. Shout outs also must go to Kathy Gnazzo who played two ends of the spectrum as Mrs Chauvenet and the cab driver; and Sondra Rosoff as Mrs. Betty Chumley.

The play’s success also rests with the director, Margaret Young.  Ms. Young expertly directed the production (and it was nice to know that she did her due diligence by researching effects used in London productions as well as the recent Broadway production with Jim Parsons and re-creating them in this version).  Kudos to Bill Mentz (scenic design) for his period sets; Kyle Stormes (lighting design) for his subtle light changes throughout the play; Janet Fenton and Shelagh (costume design) for great period dress; and, last but not least, Jennie Marino (special effects design) and Ron Drobes (technical director). 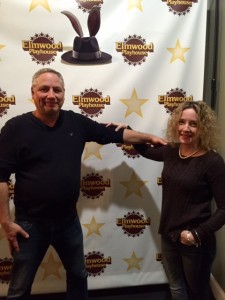 Harvey teaches us that it’s okay to march to the beat of a different drum and that there is danger in trying to make individuals conform to societal norms.  In many ways it’s like Miracle on 34th Street and the darker, cautionary tales told in films like Stepford Wives, One Flew Over the Cuckoo’s Nest and A Clockwork Orange. Props to Elmwood Playhouse on a fine production.

One of my biggest delights came when my wife and I met Harvey himself. I invited Harvey to stay with our blended family of seven children, three dogs, and a rabbit named Chuck. He politely declined saying that it seemed that I already had a pooka of a different color.  Hmmmm…wonder what he meant by that.

It is so refreshing to sit back and watch a play that is completely unpretentious, sweet without being saccharin, and

simply speaking, just has heart – and a lot of it. And that is precisely what one can find in Harvey, the 1944 Pulitzer Prize-winning play by Mary Chase. What’s more, those very same attributes apply to Elwood P. Dowd, the central character whose naïveté, honesty, and charm become nothing short of infectious from the moment he sets foot on the stage. 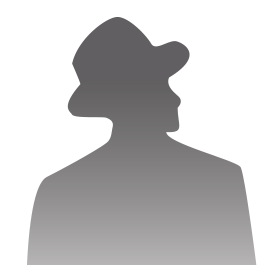 I’ve known that Harvey was the tale about the possibly imaginary rabbit, but I’m not entirely sure how I’d never taken the opportunity to see it on stage or screen (Jimmy Stewart made it a classic in 1950). Then we had the good fortune to attend the opening performance at the quaint, 100-year-old Elmwood Playhouse in Nyack, NY. The not-for-profit community theater presents a half-dozen productions each season and this was our first visit.

As a psychotherapist and professor of psychology, my bent always is toward entertainment which throughout it, threads some “study” of humanity – an investigation into the minds and behavior of the people portrayed. In fact, this is how we define psychology. And I suppose even when it isn’t overtly the theme, I’ll see it anyway – I’ll read between the lines looking for those fascinating, thought-provoking Easter Eggs – the quirks of human nature woven into all of the stories we tell. But Harvey has plenty of psychology; it also has a plethora of quirks, quips, and colorful characters. You don’t have to go looking for psychology because from the start, it’s there.

Harvey, skillfully directed by Margaret Young, opens by introducing us to the intractable and self-absorbed Myrtle Mae Simmons (played by Kimberlyn Frost with just the right amount of clearly-annoyed-with-everything kvetching) and her mother Veta Louise (Meg Sewell convincingly delivers the zany character with a requisite flightiness) who both are becoming virtually undone by Veta’s brother Elwood’s bizarre antics. The two are social climbers who cannot bear to be embarrassed any further by Elwood, with whom they reside in the family home. You see, his best friend is a 6-foot 3 ½ inch pooka – an unseen rabbit named Harvey, whom Elwood introduces to everyone he meets. They go everywhere together – and both Myrtle Mae and Veta Louise wish both of them really just would disappear – from everyone’s sights. 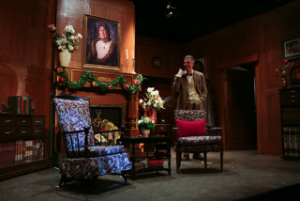 Elwood never is anything but soft-spoken, soft-hearted, and followed by the interminably soft-footed, gigantic, invisible rabbit. And despite his predilection for other-worldly companionship, he is a genial, polite, and likeable guy, albeit a bit of a drinker. The question is, is he delusional or is he the only one who is open-minded enough to see this mythical creature? Is he the only one who truly is enlightened and able to grasp the meaning and importance of life’s “golden moments”? Elwood is a man who views the world through different eyes.

Now with no barometer of which to speak (again, having not seen the production elsewhere), Andrew Greenway was brilliant in creating the incredibly affable, if not peculiar Elwood. Wayne and I had the opportunity to speak with Andrew post-show and he explained that the inspiration for his interpretation of the character came from none other than Fred Rogers (a.k.a. “Mr. Rogers”) whom he described as a man “completely without guile.” He even directed us to check out a YouTube video of Fred’s interview with Joan Rivers. We did. And he was spot-on.

Harvey delves not only into individual eccentricities, but also acceptance and tolerance. It addresses the possibility of mental illness without defining exactly what that might be – because no one really knows if this Harvey is real or a hallucination; besides, is Elwood the only one who sees him? Other characters may, or at least are touched by him, and we are entertained by those possibilities.

The tale is at the same time circuitous and direct, but it is up to the audience to ultimately decide: What is reality? Some might, from the start, decide that Harvey does not exist, just as many of the characters do. That makes Elwood unstable, delusional, ill. Others will believe otherwise – that Harvey is real; it almost seems possible to palpably feel something in Harvey’s very non­-existence, and by no means is that because of the handful of “special effects” utilized onstage with random doors opening and chairs rocking. 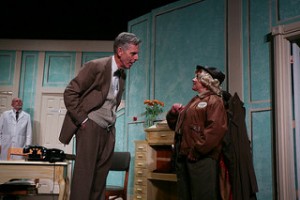 Overall, the cast at Elmwood Playhouse brings this fanciful yarn to life, moving back and forth between the well- designed sets (expertly dressed by Bell Mentz) of the Dowd Library and Chumley’s Rest, a sanitarium where Veta Louise (with her daughter’s blessing) attempts to commit the unsuspecting Elwood. Anne Marie Goulding is terrific as Nurse Kelly whose desire to nab the elusive young psychiatrist, Dr. Sanderson (the charming, if not bumbling, Steve Bermack), is a humorous subplot in the story. The sanitarium’s head psychiatrist, Dr. Chumley (Gordon Wolotira) and his wife Betty (Sondra Rosoff) are terrific. Supporting characters, the hilarious Duane Wilson (Edward Van Saders), socialite Mrs. Chauvenet (Kathy Gnazzo), family friend Judge Gaffney (Greg Schilero), and the insightful taxi driver E. F. Lofgren (also played by Kathy Gnazzo) complete the troupe.

Fireworks ensue, but you’ll have to visit Elmwood Playhouse to see Harvey to find out what they are. Ultimately you can decide what story it is you choose to believe. But as Elwood P. Dowd said, “…I’ve wrestled with reality for 35 years, Doctor, and I’m happy to state I finally won out over it.” What is reality, anyway?

Read Our Other He Said/She Said Revews