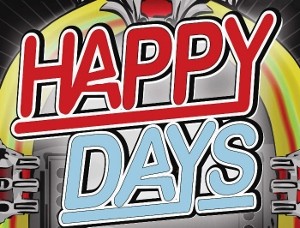 Happy days are back for all of us at the Westchester Broadway Theatre and I am talking generically as well as about the musical Happy Days based on the ABC television show. It’s that time in America, between World War II and the turbulent sixties when peace reigned across the land, the baby boomers ruled, and at least the perception was, everything was calm and copacetic.

WBT’s production of Happy Days is filled with the three Ps – PURE fun, PURE entertainment, and PURE happiness for all ages. You don’t have to be a child of the fifties or a fan of the show to enjoy the story or the characters, but it certainly can help. The television show was a mega hit on ABC from 1974 to 1984. Although several versions of the pilot failed, it was the springboard for Ron Howard being cast in George Lucas’s American Graffiti movie which also became a mega hit in theaters. After some reworking, the show was sold to Happy Days, America fell in-love it with it including a character named the “Fonz” played by Henry Winkler and the rest is history as they say.

What’s great about the play (and there are so many things) is that the book was written by the TV show’s creator, Gary Marshall, and the music and lyrics were created by veteran singer/songwriter Paul Williams. Both veterans created via the play the idealized version of America in the fifties that was portrayed on the show. In turn, WBT’s production, directed and choreographed by Jonathan Stahl, captures the essence and spirit of the television show and its unforgettable characters. 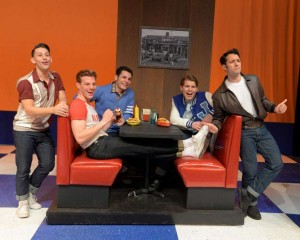 The plot, like the TV show, only facilitated the characters. The beloved hamburger joint Arnold’s is going to be razed to the ground in favor of developing something called a “mall.” The town decides to raise money by having a wrestling match between the dreaded Malachi brothers and none other than the coolest dude there – the “Fonz” aka “Fonzie” aka Arthur Fonzarelli. People come from all over to see it, including former town resident and Fonzie’s old girlfriend, Pinky Tuscadero. Problem: Fonz hurt his knee in a demolition derby. Unable to show or display weakness, he deserts the town on the eve of the match. Leaving Richie Cunningham and his buddy Ralph Malph as poor wrestling substitutes. Will they be maimed and/or killed in the ring? Will Arnold’s succumb to a strip mall? Will the Fonz arrive like The Magnificent Seven to save the day? All of these questions will be answered when you see this fun show. 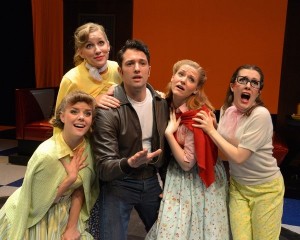 The trick to playing iconic characters in an iconic show is to channel enough of the character to please the masses, but to leave room to make the role your own. It’s a Herculean task for any actor and while direct comparisons between a theatrical version and film version sometimes should have no bearing on the overall effectiveness of either medium, that is almost impossible in a case like Happy Days where direct comparisons between the play and TV show are both invited and facilitated. Fortunately, director Jonathan Stahl has assembled a professional, talented team that can pull off that delicate balance. The three main homeboys, Richie, Ralph, and Potsie are all competently and capably played by, respectively, Herb Porter, Schyler Conaway, and Michael Linden. Herb brings that special, likeable boy-next-door charm to the role. Veteran actor Peter Marinos makes a perfect Arnold – he had an especially difficult task of channeling just the right amount of the two great actors who played Arnold on the show – Pat Morita and Al Molinaro. Nice surprises in casting were the talented Mia Weinberger and Mike D’Amico who played puppy lovers Joannie and Chachi (they had two iconic shows to wrestle with – no pun intended – Happy Days and the spin off Joanie Loves Chachi.) The crazy, sometimes over-the-top, but always engaging Malachi brothers were played by Nicholas Park and Ian Parmenter who, at certain points, seemed as though they were channeling characters from Sha-Na-Na. Maria Logan was simply wonderful as Pinky Tuscadero. She brought a real vibrancy to the role. Rounding this excellent principal cast was Hannah Kate Wilson as Lori Beth, Nicholas Park as Leopard Manny Mac, and Kilty Reidy as Leopard Manny Bloom (an extra nod to Kilty who also served as the Dance Captain and part of the ensemble).

No, I didn’t leave anyone in the cast out. I just saved for last Nick Varricchio who played Fonzie. What began as a small recurring role known as “Fonzie” on the ABC sitcom, became a worldwide phenomenon and franchise. The character Fonzie was on everything from tee shirts to lunch boxes. Henry Winkler, who played the character, said in an early interview that he based Fonzie on the lead character in an independent film he did called The Lords of Flatbush. The lead character was played by none other than Sylvester Stallone. 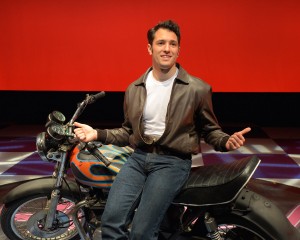 Needless to say. Nick Varricchio had a task of epic proportions. How do you follow in the wake of a leading pop culture icon? Well, he didn’t follow, but rather lead by making the character his own. When he first came out, I was somewhat trepidatious about whether or not he could pull it off. No matter how you slice the pizza at Arnolds, the success of the play, as it did with the television show, lies with the strength of the Fonz. Shortly into the first act I was sold. Varricchio proved to be a perfect casting choice for the role.

Good by grey sky, there’s only blue for miles at Westchester Broadway Theatre! Everything was downright coolamundo when some of Milwaukee’s most beloved and iconic residents took the stage in all their 1950s glory. Donning leather jackets, sweater sets, cuffed jeans, and quite a number of leopard fezzes, the Happy Days gang danced and sang their way into the hearts of the audience, in a style that only can be described as “sweet as pie!” 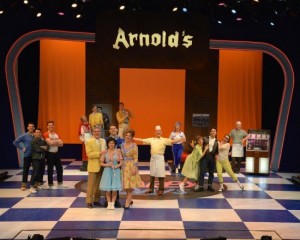 Based on the uber-successful TV sitcom by Garry Marshall (who also wrote the book for the production) which aired from 1974-84, both the musical and the show epitomize the model American family and the idyllic 1950s lifestyle, and also harken back to an era when families spent true quality time together. With music and lyrics by Paul Williams, the play is set in Arnold’s malt shop, and the cast is back – the King of Cool, Arthur “The Fonz” Fonzarelli; the Cunningham family: kids, Richie and Joanie, and Mom and Dad, Marion and Howard; Charles “Chachi” Arcola; Ralph Malph, Warren “Potsie” Webber; and the inimitable Pinky Tuscadero – and they lead the others in what becomes a collaborative effort to save the shop from demolition and the subsequent construction of – egads – a shopping mall!

The plot is a simple one: what can they all do to raise money to save Arnold’s? Who is cool and charismatic enough to get the job done? Why, the Fonz of course! Nick Varricchio certainly fit the bill as Fonzie – with just the right amount of swagger and an impeccably slicked back ducktail, he channels a bit of Henry Winkler without becoming a caricature of him. With best friend Richie fast on his heels, Herb Porter is the perfect ginger for the role. His smile is infectious and his voice is spot-on. Richie leads his buds, the “Dial Tones” – the singing group comprised of Ralph, played humorously by Schyler Conaway; Potsie, a wonderfully nerdy Michael Linden; and Chachi, the younger cousin to Fonzie, is an excellent Mike D’Amico. 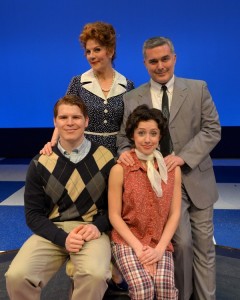 Working hard to come up with fund-raising ideas, everyone, including Howard’s fellow Leopard Lodge members decides they should put on a dance contest and a wrestling match with the dreaded Malachi brothers; and Marion bakes some pies for good measure (as any good 1950s housewife would). Howard, played by Peter Davenport is the epitome of the ‘50s breadwinner; and Marion, played by Lori Hammel, not only looks the part, but truly has you feeling as if you’ve gone back in time. The Malachi brothers, Jumpy played by a very jumpy Nicholas Park and big brother bully “Count” Myron, played by Ian Parmenter, both are equal parts absurdity and outrageousness – I think they may have had too many malts at the malt shop. And speaking of the malt shop, Arnold, played by Peter Marinos was a delight.

Woven throughout the gang’s impassioned undertaking are the romantic relationships between the Fonz and his former love, Pinky Tuscadero (Maria Logan is dynamic every time she’s on stage and has a phenomenal set of pipes); Chachi and Joanie (Mia Weinberger is precocious, spunky, and twirls a great baton); and Richie and Lori Beth (the quintessential girl-next-door, Hannah Kate Wilson). 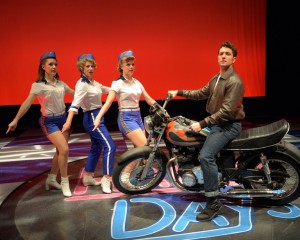 A few of the memorable moments were the numbers “What I Dreamed Last Night,” sung by Marion and Joanie as each look at the current state of their lives – Marion dreams of being more than a housewife and Joanie hopes for love as she pines away for Chachi. Fonzie ends Act one powerfully with “Maybe It’s Time to Move On.” The Malachis stir up the fun as the bullies they are with “Malachi’s (reprise).” But a really fun number is when Fonzie and “The Guys” take the stage (I won’t spoil who they are) in “Guys Like Us.”

No small roles, as always, shout-outs go to the very funny Leopards Nicholas Park as the Leopard Manny Mac and Kilty Reidy as Leopard Manny Bloom. And the show wouldn’t have been complete without the ensemble: Matthew Borchers, Colleen Campbell, Aubrey Mae Davis, Samantha Gardner, Leisa Mather, and Michael McClure, as well as Park and Reidy.

Director and choreographer Jonathan Stahl superbly led the cast in this bright, light, bubble-gum production along with associate director Leisa Mather. It was a night of pure, cheerful, family fun.

With dynamic set design by Steve Loftus, Westchester always impresses – this time perfecting the feel of the 1950s malt shop and the Cunningham house. Costumes by Janelle Berté and wig/hair design by Gerard Kelly completed the look of the classic era. Kudos to Andrew Gmoser for lighting, Jonathan Hatton and Mark Zuckerman for sound, Victor Lukas as production stage manager, and Jessie Jardon as assistant stage manager.

So aaaay! Happy Days gets a real Fonzie two thumbs up! You’ll want to make it a happy day or a happy night and catch the show at WBT while you still can! (Yes, I went there!)